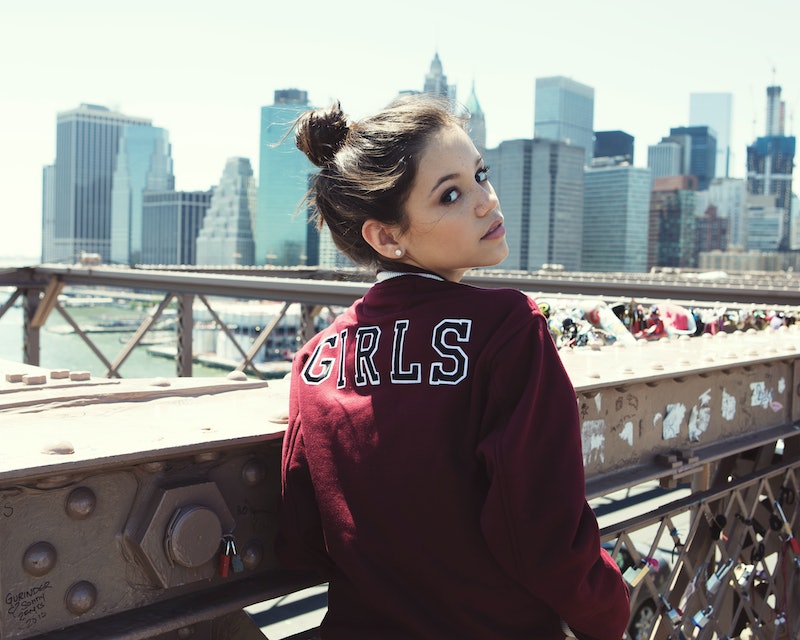 If you aren't familiar with Jenna Ortega just yet, you should probably make a mental note of her name. Ortega plays Young Jane on Jane the Virgin , as well as a lead character in Disney's Stuck in the Middle. And in case that's not enough, the 13-year-old is part of Disney's upcoming TV show Elena of Avalor , which features the first-ever Latina Disney princess. Making her résumé all the more impressive, each of these projects is groundbreaking in its own way.

"To be a part of the show with Disney’s first Latina princess is an honor. I’m surrounded by such incredible talent and I feel that young Latinas like me can now see themselves as a Disney princess and can relate to one. And me, not having that when I was younger, the show is something that I’m very proud of."

On Elena of Avalor, Ortega will voice the character of Isabel, the princess' younger sister. Ortega describes Isabel as "a smart inventor, who’s creative, loves her family very much, and is a little bit of a tomboy." It may seem like a small comment, but even the fact that her character has tomboy tendencies can help change the perception of what female Disney characters should or shouldn't be.

Meanwhile, Jane the Virgin breaks barriers in terms of Latina representation on-screen, too. Speaking to this idea, Ortega says, "When I first started acting, there weren’t a lot of roles for Latinas out there. Now opportunities are growing and I’m seeing all of these Latinas rise and it makes me happy." The CW show features a diverse range of dynamic characters. It also doesn't shy away from tackling important topics, including immigration, like when Jane's grandmother, Alba, faced a deportation scare and later became an American citizen.

Those two series aren't the only ones that are making strides toward greater representation. On Ortega's Disney show Stuck in the Middle , she plays Harley, a girl with a major interest in engineering. It's a known fact that there's a gender gap between men and women in STEM fields and there's been a lot of recent initiatives to try and spark girls' continued interest in these subjects. Hopefully, portraying strong female characters who are interested in science and technology can help shatter stereotypes along the way, especially to an impressionable audience. Says Ortega,

"The character that I play in that show is an important role for young girls because she doesn’t care what other people think and she likes that she’s different. She doesn’t let anybody’s comments get in the way of what she wants... She loves that she does engineering or she’s into reading and math and science, even if other girls think she’s weird for it. She embraces her differences."

On the topic of important roles for young girls, it's not too surprising that Ortega looks up to Gina Rodriguez, her Jane The Virgin co-star. She explains, "She is one of the sweetest people you will ever meet and I think she’s a great role model for young Latinas like me." Another source of inspiration is Jennifer Lawrence. Not only does Ortega deem her a "phenomenal actress," but adds, "From interviews, I see that Jennifer Lawrence has a very fun, cool, personality and she seems very grounded."

The teen is grounded herself, but with big dreams to keep her going. When asked what's her dream role, she tells me, "My dream role would be a leading lady in a big feature film." After a brief pause, she enthusiastically adds, "Oh, and I would also like to get into directing, producing, and writing, so I could be on the other side of the camera."

From the sound of it, she's got a long career ahead of her — and she's already on her way to making it as meaningful as possible.