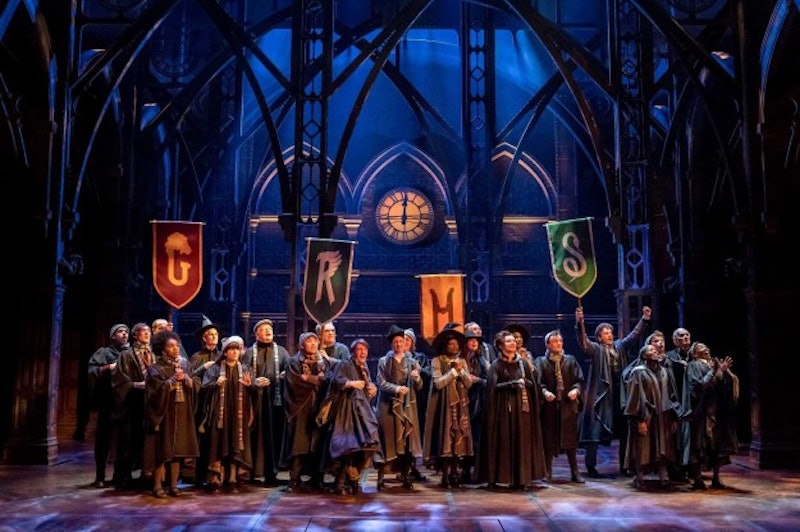 Warning: spoilers ahead! After the major, major plot twist in Harry Potter and the Cursed Child revealed that Voldemort had a secret daughter, many people are wondering: just how old is Delphi? After all, this new character, the daughter of Bellatrix Lestrange and Voldemort, would have to have been born in an extremely specific timeframe in order for it to still fit in with J.K. Rowling's earlier books. Fortunately, we can actually trace back fairly easily when she was conceived and born within the framework of the last two books.

The script describes Delphi as a "twentysomething," but based on what little information we have about Delphi's origins, it is safe to assume that when we first meet her in the narrative, she is around 23 years old. She says that she was born prior to the Battle of Hogwarts, which means she would have been born in Harry and Co's seventh year. If 19 years have passed between the eighth book and Harry Potter and the Cursed Child, then by the time Delphi meets the boys in their fourth years at Hogwarts, it makes sense to put her at about 23.

Still, readers are probably wondering — when on earth was she born? Bellatrix was such a huge part of the last few books that it seems like hiding a pregnancy would have been a difficult task. Incidentally, a Redditor predicted how and when this could have happened before Delphi's existence was revealed. Redditor sappy6977 actually figured out over a year ago that a Voldemort progeny was possible, and did some light math for us all:

You ever notice how Bellatrix Lestrange is not there when Snape kills Dumbledore on the tower (in the book, anyways)? Why wouldn't Voldemort's most dangerous lieutenant, and Draco's aunt be there? At the beginning of HBP, Bellatrix says something strange..."If I had sons, I would be glad to give them up to the service of the Dark Lord!" Notice how she said sons, not a son.In DH, it says 3 times that Bellatrix talked to Voldemort as a lover and her death is the only time Voldemort is upset at someone's death.

My theory is Bellatrix was pregnant at the beginning of HBP when they saw Snape with Voldermort's child. She is thinking of the future and says sons instead of son because she already has one on the way. She is missing from the battle because she is off giving birth to Voldemort's child. She changes how she speaks to him after OOTP and Rowling even tells us how. And it's why Voldemort insists on Bellatrix getting rid of Nymphadora and keeping her family tree pruned. Therefore, I think the cursed child is Bellatrix's child with Voldemort. And that the plot will be if a child is born bad because of their parents or if the child has a chance to be good despite.

So there you have it, fellow Potterheads. It's almost downright eerie how well Delphi fits into the timeline. It's almost as if J.K. Rowling is ridiculously skilled at planting easter eggs and subsequently blowing our minds when we least suspect it? (WHO KNEW??) In any case, Delphi's life is nothing more than a confirmation of what most of the human race already knew: Nobody likes you when you're 23.