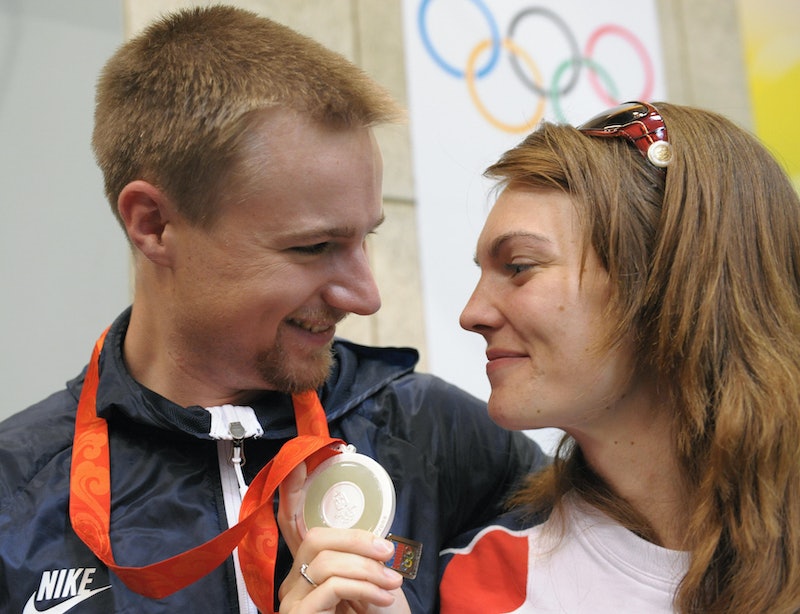 Some people think work is a great place to meet a significant other. Why not, right? And if you’re competing at the Olympics, it should be no different. Yep, there are couples who met at the Olympics.

Meeting someone at work could be ideal, a win-win — gold medals involved or not. One-third of singles have dated a co-worker, according to Match’s Singles In America study. And I’d say the Olympics definitely count as a workplace. After all, chances are, the athletes innately have a lot in common and get each other’s lifestyles — like the intense schedules, commitment, and passion to their sports. Plus, the huge thing that they have in common: They made it to ~the Olympics~.

What about the awkwardness that sometimes comes with a workplace romance? The athletes are likely competing in different sports and are pretty ~busy~ so it’s not like they can see each other 24/7 anyway. Some Olympic athletes may opt for Tinder (I’m looking at you, Ryan Lochte), and that could work, too.

And if they want to have safe sex? Their employer has them covered there — literally and figuratively: At this year’s Olympics in Rio, 450,000 condoms are being given out, aka about 42 per athlete. And that 450,000 is part of the nine million total condoms being given out in Rio throughout the Games, courtesy of the Brazilian government. Talk about promoting safe sex. Btw, can you imagine if free condoms being doled out at everyone’s jobs was a thing?

And, worst-case scenario? If an Olympics-born relationship doesn’t work out, athletes can keep this in mind: Around 11,000 athletes compete in the Games, so they can — and probably will — meet someone else.

ICYMI, Roger Federer, the Swiss tennis player who happens to have the all-time record of 17 Grand Slam titles, met Slovakian tennis player Mirka Vavrinec at the Sydney Games in 2000. Where? None other than Athletes’ Village. In 2009, the two had twin daughters, and in 2014, they had twin sons.

“It is one of the most special events in the world, in sports, in life, anything,” Federer told Yahoo News. “It is a special thing to be part of and if you can be fortunate enough to win a medal or even a gold medal it means everything. But it is extra special for me, of course, because of what it means to how my life has gone.” I’ll say.

Vavrinec stopped playing tennis in 2002 after a foot injury, but helps manage public relations matters for Federer. “It has always been a nice thing for us and our relationship to think about the time we met and the fact that it took place at an Olympics,” Federer said. “It is pretty cool that it is the time when we were introduced, and obviously now we have been together a long time and have a family and share our lives and all the experiences.”

U.S. figure skater Kristi Yamaguchi met her husband, U.S. hockey player Bret Hedican, at the 1992 Games in Albertville, France — the day after she won the gold. It would take a few more years, however, until they’d start dating in 1995.

“He was clean-cut and soft-spoken,” Yamaguchi told People after they became engaged in 1998. “Figure skaters have awful perceptions of hockey players, and I thought, ‘This guy's a little different.’” They married in 2000 and have two daughters.

In Athens in 2004, U.S. shooter Matthew Emmons won a gold medal in the 50-m rifle prone (and he didn’t even get to use his own rifle since someone had ruined, i.e., sabotaged, his). However, when it came time for the 50-m rifle three-positions competition, he went from first place to eighth — after cross-firing on his last shot. Enter Czech sport shooter Katerina Kurkova, who was there to console him at a bar.

Both Armbruster and Miller play goalball for the U.S. Paralympics team, a division of the United States Olympic Committee. It’s a sport for blind athletes in which players wear eye masks and the ball makes noise when in motion.

They played separately before together. Armbruster was Miller’s role model before they met — playing the game, of course. In Athens in 2004, they won the silver when playing together and then the gold in Beijing in 2008. And, between, in 2007, they got married. They had a son in 2011.

Armbruster herself has been in six Paralympic Games. Now, they’re trying to win in Rio. Since they’re on the same team, how do they relate to each other on the court? “Occasionally we do argue like spouses and our teammates laugh at it. And sometimes we use terms of endearment on the court,” Miller told Rio2016.com. Armbruster had a different response. “What a way for a couple to vent, throwing a 1.25kg goalball at each other at about 50kph,” she said.

During the Cold War, Czech discus thrower Olga Fikotová and American hammer thrower Hal Connolly met during the Melbourne Olympics in 1956 and stayed together afterwards, even though not everyone approved. Namely, the Czech government — they had to get permission from Czechoslovak President Antonín Zápotocký. Can you imagine?! Having to get the official okay from your President?!

“I returned home as the only gold-medal winner in the delegation, and at an official reception I was told that I brought from Melbourne 50% honor and 50% shame because I’d been running around with an American fascist,” Fikotová told the Financial Times.

When they finally were able to marry in 1957, 30,000 people attended. They ended up having four children. Though they divorced in 1974, their relationship lasted almost two decades, so not all Olympic pairings are short-lived.