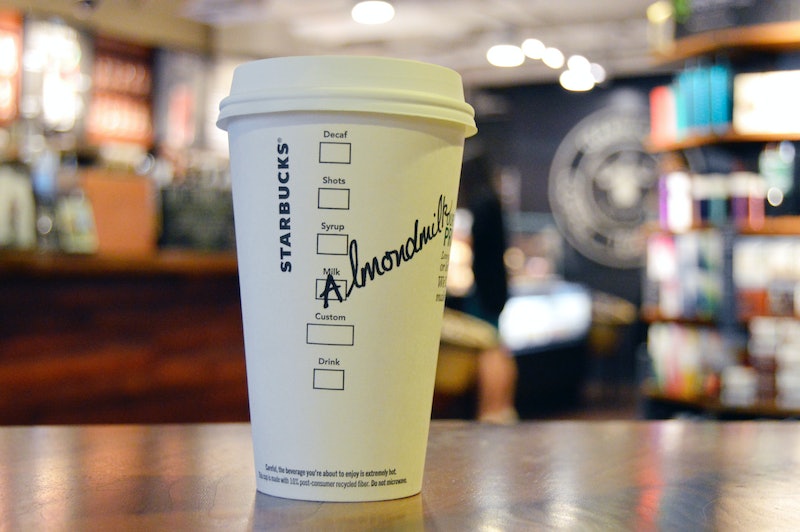 As a former barista, I know firsthand how very into non-dairy latte options many people are, so I can only imagine how many times Starbucks employees have had to field the question, "When can I get almond milk at Starbucks?" The answer, finally, is one that I'm sure everyone in that equation will be happy to hear: Soon! Really soon! Like, next month soon!

Beginning on Sept. 6, Starbucks will begin initiating a nationwide rollout of almondmilk options, rounding out the coffee chain's non-dairy offerings to three — soymilk became available in 2004, and February 2015 marked the arrival of coconutmilk. And for the curious, yes, those milk options are all one word on the Starbucks menu, as opposed to two; according to a press release, Starbucks is following "the latest industry approach by spelling non-dairy milk alternatives as one word." Just, you know, FYI.

In any event, according to that same press release, the first 4,600 stores will be in the Pacific Northwest (of course — it's the Home of Starbucks, after all), Northern California, New York, the Northeast, and the Mid-Atlantic regions; however, by the end of the month, it'll be available nationwide. That's right — even us Midwestern babes will get to enjoy our very own almond milk bevs.

And by almond milk bevs, I'm thinking of one very specific bev: The mighty Pumpkin Spice Latte. With almond milk. I'm a parody of myself but I don't even care, because that's going to taste truly delightful. Yes, I am one of those people who is neither vegan nor lactose intolerant who still orders non-dairy lattes. No regrets.

But since we're on the topic of fall, and since I am covered in bug bites and my hair has congealed into a giant, frizzy knot at the back of my head (thanks, Lake Michigan!), here are a few more things to look forward to come autumn. In addition to almond milk. And the return of my skin to a non-red hue. It's going to be big, you guys. Really, really big.

La la la, just reminding you once again that it won't always be 95 degrees with 100 percent humidity. You also won't be existing exclusively on Pink Drink and avocado toast forever. And that's OK.

No, I am not going back to school; however, I always feel like the majority of the United States becomes overtaken by back-to-school vibes come September, and you know what? I do not hate it. "You do need a new bag," I begin thinking. "Your desk really could use this pack of 50 gel pens and four new notebooks," I whisper. Then suddenly I've spent all my money, but that's OK, because this eraser smells like cinnamon and hope.

My ideal fall aesthetic is Art Mom Learns to Knit, and I can't wait to wear an entire outfit made of sweater material and top it off with my favorite human-sized scarf.

I'm awful and already scheming about my Halloween costume, but also: 13 Nights of Halloween? Bingeing on all of the Halloween-themed Disney Channel Original Movies (which are objectively the best ones)? Scaring myself with the Ouija board again? Yes please!

5. Living In An Orange-Hued Kaleidoscope

Granted, this mostly applies to humans living in places with distinct seasons, but for those who do: Fall leaves are beautiful and there's no way you can argue against that statement.

Ugh, fall's pilot season is forever a patchwork of reboots, superheroes, Dads, and old standbys. And I love wasting endless evening hours that should be spent on yoga or applying to grad school on shows so bad they're good. And doing it wearing 15 sweaters and holding an almond milk PSL in my hand and basically living the dream. I'm so ready.