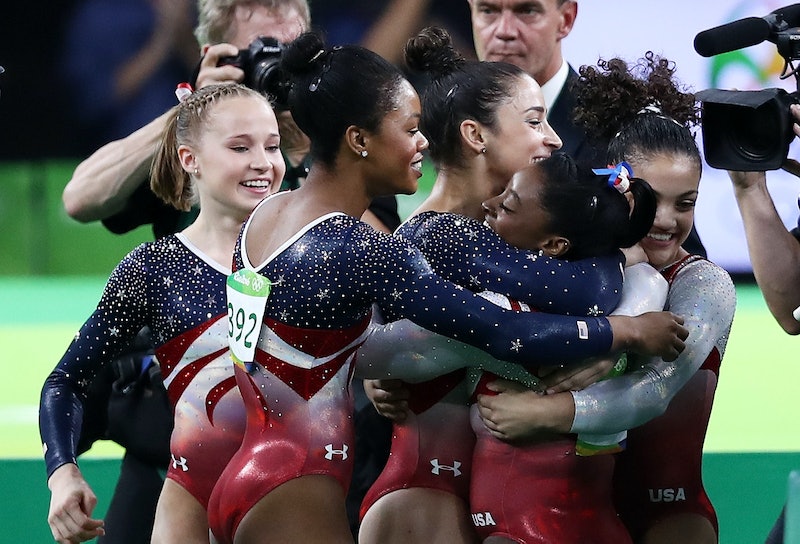 While all eyes were on the floor when the U.S. women's gymnastics team won gold at the Rio Olympics in the team all-around competition, The New York Times flipped the script by pointing their cameras at the parents of the women's gymnastics team. Parental pride is often a theme when it comes to the Olympics — you've seen it before with Michael Phelps' mom Debbie or Caitlin Leverenz's commercial for milk that features her mom — and as The New York Times' photos show, that's for good reason. Although any American with a pulse was full of pride when Simone Biles officially clinched the gold for Team USA on Aug. 9, understandably there is a whole other level of profound happiness that happens when a parent watches his or her child be the best in the world at her sport.

There's a reason parents call their children their "pride and joy," and besides the athletes themselves and their coaches, the people who were the most proud and joyful in Rio on Tuesday were the parents of the women's Olympic gymnastics team. Biles, Gabby Douglas, Laurie Hernandez, Madison Kocian, and Aly Raisman won the gold for USA by competing in the vault, uneven bars, beam, and floor exercise. And if you feel anxious while watching these women compete — I personally feel like I need a higher dosage of my anxiety medication when I watch the beam — just imagine how nervous you'd feel as a parent of one of these powerful competitors.

Raisman's parents already made a name for themselves due to their antics in the stands at London during the 2012 Summer Olympics and they haven't calmed down in those four years. Lynn and Rick Raisman still hilariously appear to be riding the most awkward roller coaster in the world with their squirming, shifting, and cringing while they watch their outrageously skilled daughter. (Did you see that floor routine?!) However, Lynn did tell The New York Times that though she had her hand over her face when her daughter was on the beam on Aug. 9 that, "I actually watched through my fingers."

Other parents kept their cool, like Douglas' mom Natalie Hawkins. In the photos from The New York Times, Hawkins appeared to stay fairly composed as her daughter — the winner of the individual all-around gold medal at the London Olympics — took on the uneven bars. Perhaps her controlled response had something to do with the fact that Hawkins has had her fair share of time in the spotlight too as she was portrayed by Regina King in Lifetime's movie The Gabby Douglas Story or maybe she's just a pro at watching her daughter slay by now.

Besides cheering in the stands for the 2012 and 2016 Olympics, Hawkins took to another medium to support Douglas after Team USA's win. Douglas faced criticism after she did not place her hand on her heart during the national anthem on the podium like the rest of her team. The gymnast apologized on Twitter, saying she meant no disrespect to her nation, and her mom also used the social media platform to defend her daughter by retweeting messages of support and thanking people who acknowledged that this attack on the gold-medal winner is completely unwarranted.

Hopefully the negative — and unnecessary — criticism of Douglas won't put a damper on the jubilation that the women's gymnastics team and their parents felt when they won the all-around gold medal. Because whether the parents of the women's gymnastics team were pumped like Kocian's dad Thomas, emotional like Biles' mom Nellie, or focused like Hernandez's dad Anthony, what the parents of these young gymnasts showed was what the Olympics — and being a parent — is all about: Supporting your athletes and being proud knowing they have achieved their very best through years of hard work and dedication.

While I most likely will never experience the emotions that the parents of Team USA felt, I still can say that I — like any patriotic gymnastics fan — couldn't have been more proud of our country's fierce (yeah, yeah I know that's not their name this time around) women's gymnastics team when they triumphantly won that all-around gold at the 2016 Rio Olympics.