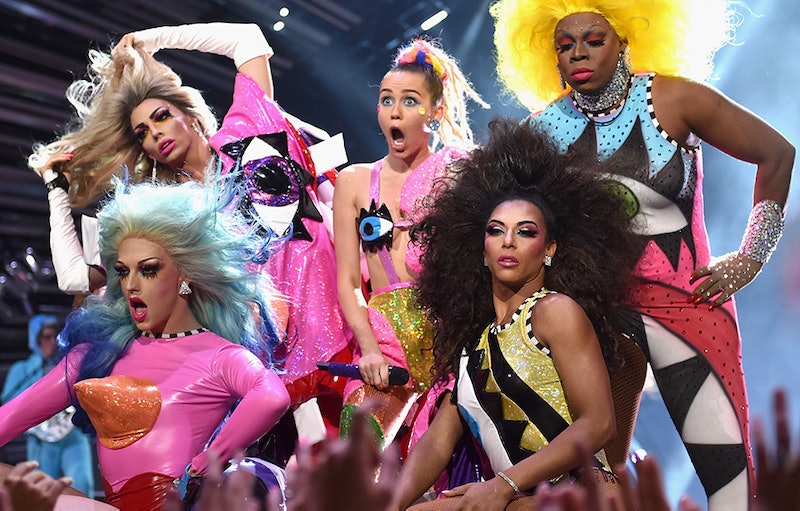 Everyone from Eddie Murphy to Miley Cyrus has done it, sometimes no one does it, and sometimes multiple people do it. No, this isn't some sphinx-like riddle, it's just how hosting at MTV's Music Video Awards works and it turns out, no one will be hosting the 2016 VMAs. Cyrus predicted the future of the VMAs when she hosted in 2015 by saying in her opening statement, "This is a show that hasn't had a host for the last two years. A tradition they'll probably return to immediately following tonight's show." Yet, the decision to make the VMAs a hostless affair in 2016 isn't directly related to Cyrus' performance last year, so why is there no host for the 2016 VMAs?

To be completely up-front, while MTV is not announcing an official host, the 2016 VMAs will have a number of people acting in the capacity of hosts — most notably Keegan-Michael Key and Jordan Peele. Key and Peele will act as emcees and also provide commentary as the characters The Shamester and Lizard Sheeple, according to Entertainment Weekly. However, before you think that the show will just have two cohosts like when the strangely dynamic duo of Bette Midler and Dan Aykroyd shared hosting duties during the first ever VMAs back in 1984, it's a bit more complex than that.

In addition to the comedians being the de facto hosts, DJ Khaled will be the host for the pre-show, along with being a correspondent during the main show from his party in a skybox suite at Madison Square Garden (where the VMAs are taking place). This idea of correspondents was apparently inspired by some major televised events in 2016 — the Republican and Democratic National Conventions and the Rio Olympics — according to executive producer Jesse Ignjatovic, Entertainment Weekly reported. Other correspondents for the 2016 VMAs include Jay Pharoah and Nicole Byer, who will take to the floor for their reporting.

While I think Key and Peele would have done excellent as standard hosts, Ignjatovic told EW that they'll be reporting like it's a sporting event since the venue has a connection to both music and athletics. "As much as it's famous for music, it's also famous for sports," Ignjatovic said. "We thought it would be great to go out to Key and Peele, who are going to be at a desk covering the show to the camera as you would see at these other events."

With Key, Peele, DJ Khaled, Pharoah, and Byer acting as hosts, it seems like the 2016 VMAs will be more racially inclusive than in years past, which is definitely a great thing — particularly when you consider what happened at the 2015 show. After Nicki Minaj entered a brief Twitter feud with Taylor Swift due to Minaj tweeting that she believed the VMAs recognize white artists and "women with very slim bodies" more than women of color and varying body types, Cyrus gave her opinion on the situation. Cyrus criticized Minaj to The New York Times before the VMAs occurred, claiming the rapper made the larger issue of diversity at the VMAs about her, which led to Minaj saying, "Back to this b*tch that had a lot to say about me the other day in the press — Miley, what's good?" when she accepted the award for Best Hip-Hop Video during the awards show.

When you consider this racially-loaded moment during an awards ceremony that has faced controversy for cultural misappropriation before — specifically by Cyrus — I'm happy to see more diversity among the hosts . . . errr, non-hosts. While Ignjatovic was speaking about the format when he told Entertainment Weekly, "Every year we try to reflect what’s going on culturally. . . . It felt like a unique approach to the show," the statement resonates beyond that.

Although Cyrus is not credited as the reason for no official host this year, she certainly wasn't wrong with her fortune-telling at the 2015 VMAs. And hopefully the show will benefit not only from this new hosting strategy, but from featuring a group of diverse and talented performers to make one of music's biggest nights even more exciting and outlandish.