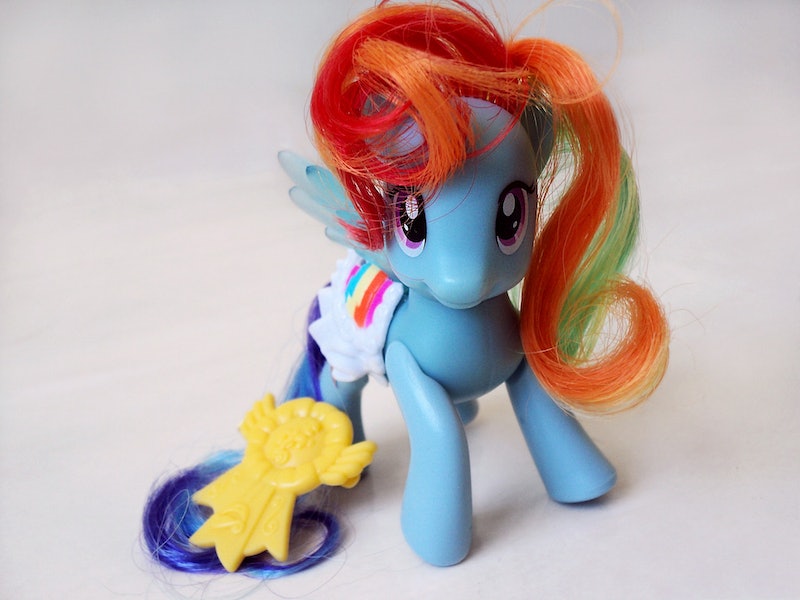 I know that entertainment for a woman of my age should more commonly consist of self-help books and adding to my Pinterest recipes board (been there, done that), but I can't help but miss the days of Cabbage Patch Kids, Barbie dolls, and Playmobil. There are so many things from the '90s I'd still collect if I could — because truthfully, it's tough to beat the hours we spent playing make believe, watching Ken and Barbie (or Barbie and Barbie, or Ken and Ken) go on romantic dates, and taking our Little Mermaid water toys for a spin in a bubble bath. I feel like we forget how to have fun as adults, because we're supposed to "grow up." But in the words of Peter Pan, I won't grow up!

I don't really collect things as an adult; I always end up feeling like I'm hoarding things I don't really need. But as a kid, it was all about collecting. Having one toy was nothing; having 50 of basically the same toy with just slight variations, however... that was legitimate.

And sure enough, my brother, sister, and I had plenty of collectible toys growing up. It's hard to choose a favorite, but you probably remember these 10 from your own childhood.

OK, so these still exist today. But they used to be way cute and so tiny and compact. As time went on, they got bigger, and, well... they're not really pocket-sized anymore, are they?

Show today's youth a VHS cassette and their eyes glaze over. "What is this? How do I use it? It is a wireless smartphone charger?" they ask, confusion stamped across their faces. But back in the day, nothing gave me more satisfaction than my colorful, shiny collection of Disney VHS tapes. I had 'em all.

Bluebird Toys also made the teeny Mighty Max toys — Polly Pocket's twin brother. They were mainly marketed toward boys, but I played with them anyway, because to heck with gender roles. The original Mighty Maxes were Doom Zones and Horror Heads. Those were the days.

The original line of My Little Pony was born in the early '80s and ran through the mid '90s. While several new "generations" were born, the original will never be forgotten.

Perhaps the most anticlimactic toy ever, they were still dope to collect — even though they were recalled in 2000. Regardless, I remember them as the magical fairytale dolls that flew up a foot and then crashed to the ground. Pure magic.

McDonald's was the king of these. I don't know what happened to them, but I haven't seen them anywhere since I was a wee one. There was a ghost, a pumpkin, a Frankenstein... Halloween will never be the same!

They didn't resemble the real Spice Girls even in the slightest, and kind of looked like they wanted to kill you in your sleep. But they were Spice Girls dolls — an absolute must for any '90s child.

Oh em gee. I almost forgot about these. Pointless? You betcha. But they were so cute! Those droopy eyes and those big, floppy ears... Who could resist that?

I was obsessed with these when I was younger, because I loved journaling myself. Young Amelia devotedly wrote in her notebook and doodled the heck out of it. The first book came out in 1995, and it looks like the most recent debuted in 2012. Am I too old for these? No? Good.