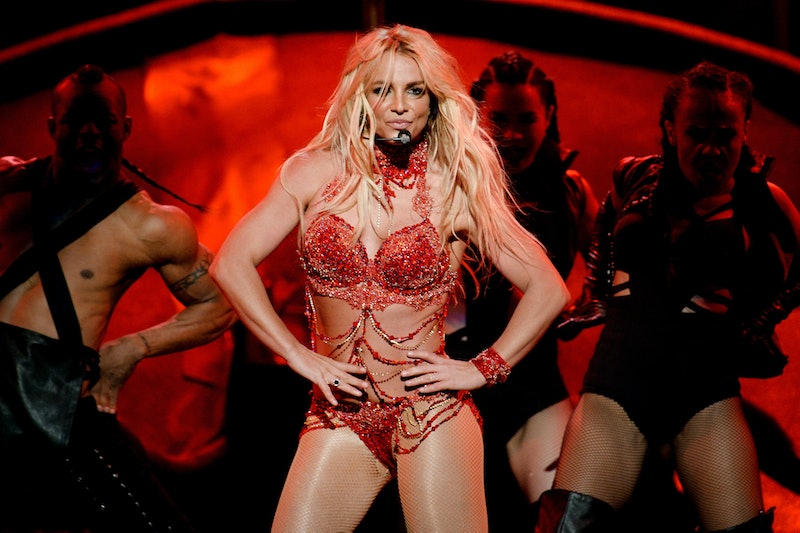 Britney Spears has had many iterations of comebacks (although if you're a die-hard fan, you know that Spears has truly never been gone) and none have seemed as legitimate as her new album Glory. Spears released her ninth album Glory on Friday, Aug. 26 and she sounds just as sexual as ever, but also more mature. Yes, it's completely unsurprising that the new album is dripping with sex songs, yet what is surprising is that Glory manages to be packed with the stuff that you've come to expect from a good Spears album while simultaneously being more laid-back. With 17 songs that fly by in a 57-minute blaze of Glory (sorry, had to do it), you're bound to have trouble choosing your favorite. However, if you're a female fan who has been a champion of Spears throughout her career, then "Just Luv Me" is the first song you have to listen to off of Glory.

Not a power dance song and not a ballad, "Just Luv Me" has a vibe that will have you subtly grooving like "Make Me . . ." — her first single off of Glory . While I always appreciate a true dance jam from Spears for working out at the gym or for dancing at the bar, the lyrics of "Just Luv Me" make it impossible not to think this is the most important Glory song for women to listen to. Check out the lyrics to see what I mean:

I'm not gonna ask for a sip when I'm thirstyAnd you don't have to hold my hand when I'm hurtingWon't make you sober me up when I'm turningAnd you don't gotta say it, I know that I'm worthy

She sings "Just luv me" before these lyrics, but that true opening line of "I'm not gonna ask for a sip when I'm thirsty" had me so proud of Spears right from the get-go. As with almost all of Spears' lyrics, you could interpret it as a sexual innuendo, but when taken in the context of the rest of the song it's actually a tremendous message for people who tend to put their needs behind others. Since many women are notorious for apologizing when asking for basic things (guilty as charged) or for avoiding conflict even if it means not making their own needs a priority, this practical line is so empowering.

Right off the bat, the lyrics go beyond just the sexual empowerment messages that fans are used to hearing from Spears and she keeps with that theme of self-assurance in the rest of the song. Rather than asking to be told she's worthy, she makes it clear in the those opening lines that she is more than aware that she's deserving of anyone's affections with, "And you don't gotta say it, I know that I'm worthy."

The pre-chorus is less powerful, but the lyrics do act as a pretty good lead-in for the chorus:

She hints at being unapologetic here, but the pre-chorus line that I love is "Ask for pieces of my body" since it's reminiscent of "Piece of Me." One of my favorite Spears songs, "Piece of Me" masterfully criticized the media's obsession with her when it was released nearly a decade ago. Clearly, she has come to terms with a lot since then when you consider the lyrics of the chorus:

While Spears claims that asking someone to "luv" her is "nothing," it does require a certain level of confidence to even just simply ask for love — or luv. A healthy relationship really should be based simply on this qualification, but as many people know (including Spears), that is not always the case.

The second verse had me a little concerned after such a stellar first verse since it begins by saying that this love interest might think she's just saying all of this to try to come off as a cool girl, which makes me think this man doesn't deserve her:

However, Spears turns it around by singing, "I don't need nobody when I'm breaking," a line that seems to hint at her past troubles — specifically her 2007 public breakdown. And I believe she is sincere since she follows that line with the super healthy sentiment, "All I need is your love and a little bit of patience." Oh, how far she has come!

While other songs off of Glory are certainly more fun to dance to, "Just Luv Me" makes me so happy as a Spears fan since it highlights what a positive mind-set she has achieved after decades in the spotlight. This is the kind of Spears I want — confident, sexy, and healthy — and how could you not just luv her after hearing Glory?