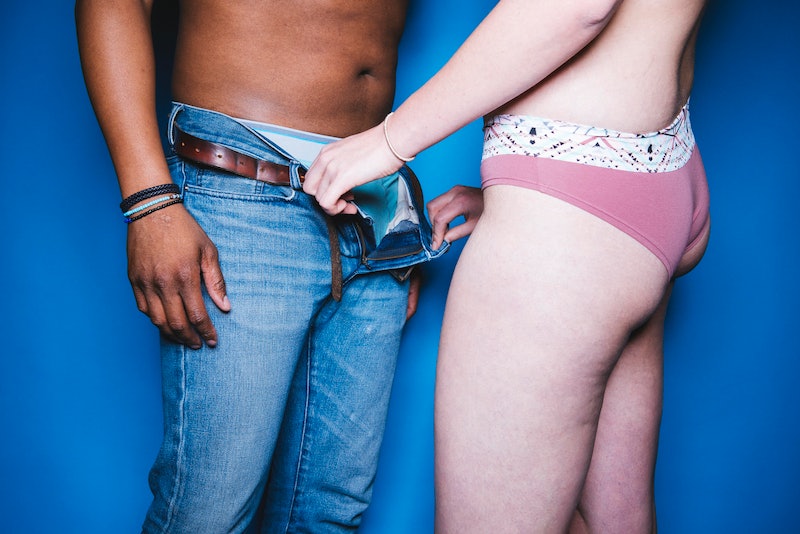 We’re always hearing that we could be having better sex, a better orgasm, or a better relationship. But how often do we hear the nitty-gritty of how we can actually better understand our deepest desires and most embarrassing questions? Bustle has enlisted Vanessa Marin, a sex therapist, to help us out with the details. No gender, sexual orientation, or question is off limits, and all questions will remain anonymous. Now on to this week's question: how to handle slipping out during sex.

Q: “I recently lost my virginity to my long-term boyfriend. He’s only been with one partner before me, so we’re both pretty inexperienced. This is so humiliating, but we’re having an issue with slippage. Things will be moving along just fine, then he falls out of me. As if that wasn’t bad enough, then he kinda fumbles around trying to get back into me. It totally kills the mood for me, and interrupts the flow. I can’t help feeling like it’s my fault, or I’m doing something wrong. I want things to be perfect. How can I prevent this from ever happening again?”

A: Thanks for the question! Most of us have intense performance pressure when it comes to sex, especially when we’re not very experienced. We all want everything to be perfect. Slippage is an issue that so many people secretly get anxious about, but it rarely gets discussed openly. I hate to break it to you, but slippage is just one of those things that comes with the territory when you’re sexually active.

Here are 10 things you need to know about slippage, including why it happens and how to manage it.

1. Know That Your Expectations Are Probably Skewed

I know slippage can seem embarrassing initially, but it makes a lot of sense if you think about it. When you’re having P-in-V intercourse, there’s a penis moving in and out of your vagina — sometimes almost all of the way out, sometimes at high speeds, sometimes when you’re very wet and slippery, sometimes in complicated positions where your bodies are far apart from each other. That’s hard work! The guy is bound to fall out occasionally.

Slippage is just a physical reality of what happens when one person tries to put a part of their body into another person’s body. The fact that your boyfriend slips out of you is certainly not your fault. It’s not his fault either. It’s just something that happens.

Side note for the anxious guys out there: slippage isn’t a size issue. Regardless of how small or large you are, certain positions, thrusting techniques, or angles are going to make it tricky to stay in place the entire time.

If you and your boyfriend are first getting started having sex, you need a little bit of time to get used to each other. Again, I totally understand the desire for things to be perfect right out the gate, but you have to give yourselves time to find the positions that work best for your bodies. I’d encourage you to focus on simple positions like Missionary and Woman on Top, where you keep your bodies relatively close to each other’s. Don’t get too complicated with acrobatic positions until you feel comfortable with the basics.

A lot of inexperienced guys tend to go into jackhammer mode with sex. They try to move as fast as possible, and pull themselves out until they’re at the very entrance of the vaginal canal before slamming back in. This can be a one-way ticket to slippage. You really don’t need huge thrusts to make sex pleasurable.

Have your boyfriend shorten his strokes, or focus on grinding more than thrusting in and out. If you feel him pulling too far away from your body, grab him around the waist and say something like, “stay close to me. I like to feel you right here.” If you guys are both fans of pulling out almost all of the way, have him hold the base of his penis with his hand and move slowly. This can feel like a really sexy tease, and will help him stay put. If your boyfriend starts moving at warp speed, tell him to slow down for a minute.

6. Consider Dialing Back On The Lube

I recommend lube in almost any sexual situation, but too much lube can make it easier for your partner to slip out. If you use lube, try using less the next time you have sex. For example, if you usually use about a quarter-sized amount, aim for a dime. If things feel too slippery in the moment, have him pull out and wipe off with a tissue before resuming.

7. Have One Person Be In Control

Slippage can happen if both partners are moving their hips at the same time. It can feel great to get swept up in the moment, but it’s also really easy to fall out of sync with one another. If you’re on top, you can say something like, “you stay still and let me do all the work.” Or you can put your hands on his hips to either slow him down or give yourself more of a sense of his rhythm.

8. Use Your Hands To Resume

One important note about getting things going again after a slippage incident: use your hand to guide his penis back into place, or tell him to use his. There seems to be a myth that sexually experienced people don’t need to use their hands, but it’s much harder — and takes much longer — trying to go hands-free.

9. Don’t Let It Distract You

Ultimately, my best advice for what to do when he slips out of you is to shake it off and keep going. It’s not worth ruining the moment by stressing out about it. I know everyone wants to be perfect right out the gate, but remember that even the most experienced couples have to deal with slippage too. If you guys are a goofy couple, you can make a little joke, like, “get back in here.” If you want to make it feel more teasing or sensual, you can say something like, “I need you back in me right this second” or “oh that’s such a tease when that happens.”

10. Use It To Your Advantage

Taking it a step further, you can actually turn slippage into a really hot moment. If you’re on top and he slips out, you can continue gently grinding up and down against his penis. (You’ll want to make sure his penis is pointed up towards his head, rather than down towards his feet.) This will give you some amazing clitoral stimulation, and will feel great for him too. If he’s on top, he can hold the base of his penis with his hand and stroke against your clit. Eventually, you may even find yourself hoping for him to slip out!