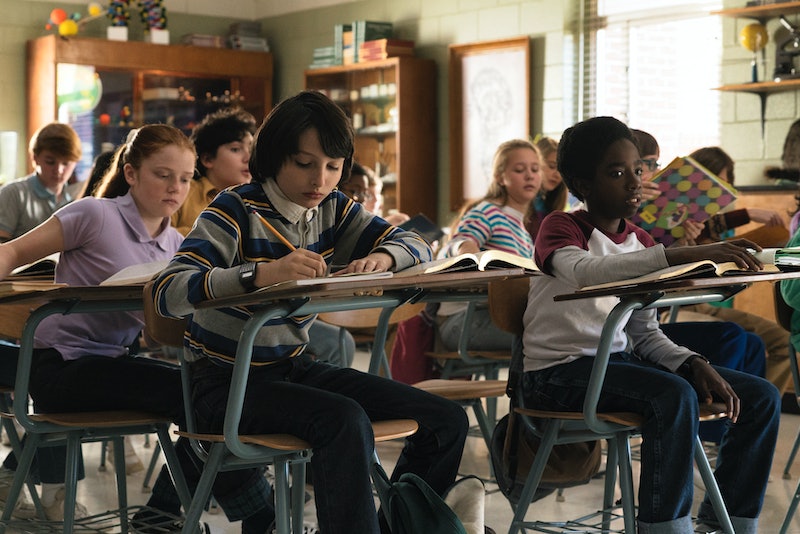 Before it had even been renewed, brothers and co-creators Matt and Ross Duffer had described Season 2 of Stranger Things as a sequel to a movie, rather than the second season of a TV show. Now that Netflix's sci-fi phenomenon has officially been picked up for a second season, we can finally start talking about what that really means. Of course, one thing that happens in all sequels is the introduction of important new characters — and that's no exception with this show. But who are the new characters of Stranger Things Season 2, and what role will they have to play in the story?

Fortunately, even though we likely have the better part of a year to go before the sophomore season even premieres, we already have an answer to the first question. The Duffer Brothers revealed to Entertainment Weekly earlier this week that Season 2 will introduce four new characters, teasing that, "There's going to be a lot of new and interesting dynamics that we didn't see in Season 1." Now, TVLine has reportedly obtained "casting intel" that unveils the identity of three of those four characters: Max, Billy, and Roman. But as for what role these new characters will play in the story… that's up to us to hypothesize about.

According to TVLine, Max is a tomboy, "a 'tough and confident' 12-14 year-old female whose 'appearance, behavior and pursuits seem more typical of boys than of girls in this era.' Max eschews Hawkins' primary mode of transportation — the bicycle — for a skateboard, which she uses to get around everywhere." She is undoubtedly the most interesting of the three new additions, since — as we know from Stranger Things ' Season 2 episode titles teased in the renewal announcement video — the second season premiere will be titled "Madmax."

It's safe to say, then, that Max will be a major new presence on the show. (Unless she's introduced in the first episode and subsequently abducted into the Upside Down as abruptly as Will was in Season 1.) But what exactly is so "mad" about her? Not only is the title a direct reference to the Mel Gibson action series (whose second and third movies, The Road Warrior and Beyond Thunderdome came out in 1981 and 1985, respectively), but it could perhaps be a hint that Max also has some supernatural mental powers like Eleven. Could she be another government experiment, another descendent of Project MKUltra, another child who has in some way encountered the petal-headed monster?

Then there's Billy, who TVLine describes as "Max's 'very muscular and hyper-confident' Camaro-driving older brother." Assuming that Max is the same age as Will, Mike, Dustin, and Lucas, then it's also safe to assume that Billy is the same age as Nancy, Jonathan, and Steve. Could our love triangle be about to blossom into a love quadrangle? Hopefully, the Duffer Brothers have something more in store for their new character than a third love interest for Nancy, but it's hard to guess what impact a "hyper-confident" older brother will have on the story. (Although that Camaro might come in more handy than a bicycle when evading shady government officials or bloodthirsty extra-dimensional monsters…)

Finally, there's Roman, who receives the vaguest character description of them all; we only know that he or she is "thirtysomething" and someone who "suffered a great loss at an early age and has been seeking revenge ever since." There are two likely targets for Roman's revenge, including Hawkins Laboratory — although with Dr. Brenner and all of his cronies dead, who is there to take revenge against? A more interesting target would be the monster itself; what if this isn't the first time the monster has slipped into our universe, and on a previous killing spree it murdered someone close to Roman? The introduction of a badass monster hunter (like Dracula's Van Helsing or Aliens' Ellen Ripley) is exactly what Stranger Things Season 2 needs.

None of these roles have been cast yet, but executive producer Shawn Levy told The Hollywood Reporter that, since Stranger Things exploded in popularity, a number of famous actors have approached them to express interest in joining the show. "Certain actors that you have definitely heard of have raised their hand with real interest to be a part of it," Levy said. But don't expect Stranger Things to become the next True Detective, casting every role with high-profile Academy Award nominees. Rather, Levy insists that,

...the show's appeal is based so much on the unknown quotient in our actors, in our premise, in our plot. So we do hope to keep that same discovery, and that would suddenly go away if we decided to cast all the famous people who said they'd like to be a part of it.

As for Eleven herself, the Duffer Brothers remained mum on her involvement in Season 2, telling EW simply that, "We leave that up in the air." But come on — there's just no Stranger Things without Millie Bobby Brown. (Or Barb. #BringBarbBack! #JusticeForBarb!)