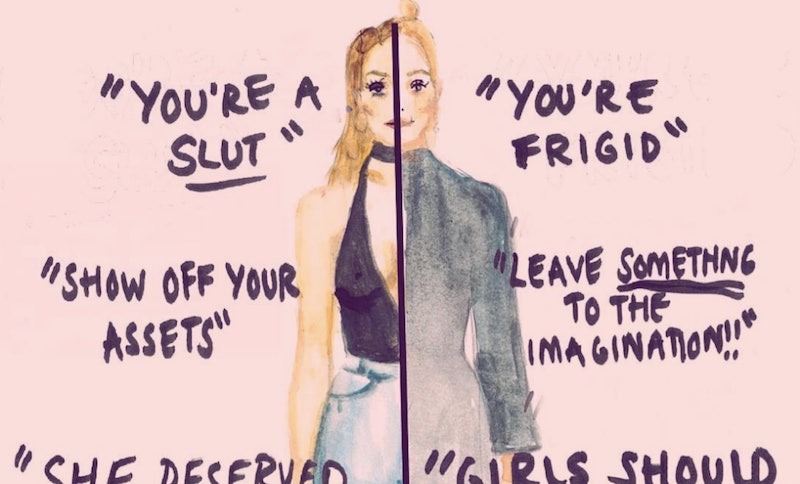 Despite all of the public outrage re: women still getting unfairly judged based on their clothing choices in 2016, the phenomenon has, unfortunately, persisted as strongly as ever. Just yesterday, a news anchor went viral not for doing her job, but for wearing jeans on the air, finding herself subjected to an unfair, inherently sexist scrutiny that female reporters endure far too often. This summer has been defined by the xenophobic debates about whether or not Muslim women should be able to wear Burkinis to cover up at the beach in France. Basically, when it comes to discussions about women and the internalized sexism of their clothing choices, we are all too often one step forward, two steps back — and nothing highlights that quite as fittingly as Daisy Bernard's illustration about contradictory sexist expectations for women.

Bernard, an illustrator and assistant editor at The Tab in London, used her talents to perfectly show not only the sexism internalized in women's clothing choices, but also the dual, conflicting nature of the sexism. The burdens placed on women and their appearance are already cumbersome enough, but it is illustrations like Bernard's that show that this sexism is so firmly internalized and all-encompassing that there truly is no way for women to "win."

"I was looking at the recent Burkini illustration by La sauvage jaune, and it made me think that it's not just with clothes that women are set ridiculous expectations," writes Bernard to Bustle over email.

The Burkini illustration, which went viral in August, set the tone for Bernard's illustration by similarly drawing a line down a woman's middle and showing on either side of her the conflicting expectations. It inspired Bernard to create not just this image, but three others as well. "I decided to do this series (work, relationships, sex and appearance) and actually struggled getting it down to four because there's so many!" she writes to Bustle. The other illustrations are available in her original article on The Tab.

While it is a grim thing to acknowledge just how applicable these double standards are to all of the aspects of women's lives, it is heartening to see it so clearly represented in Bernard's work. "I wanted to show things that are not just ridiculous (and unfair) things you hear on the news, but stuff that women of all ages have experienced in their life and often considered it normal," writes Bernard.

Of course, this isn't the first time the internet has rallied in defense of women being held to unfair double standards. Bernard and La sauvage jaune are to 2016 what this viral campaign by Terre Des Femmes was to 2015, similarly highlighting the unfair interpretations of women's appearances.

That campaign used skirt length, heel height, and collar measurement along with the words women hear and internalize far too often, along with the powerful slogan, "Don't measure a woman's worth by her clothes."

But despite raising public awareness of this issue, and despite these powerful campaigns by artists like Bernard and La sauvage jaune, the issue persists. There isn't a moment that a woman enters a public space where she isn't immediately consciously or unconsciously judged for her attire and subject to "rules" in a way that men just plain aren't. In a culture where women are still being subject to micro-aggressions like being asked to put on a sweater to cover up their shoulders on television to overtly damaging questions like what they were wearing during their rapes, the internalized sexism of women and their clothing choices seems more inextricable than ever. Hopefully, images like Bernard's will help tip the balance toward a world where women aren't held to sexist standards like the ones she so poignantly illustrated.

Be sure to check out rest of Bernard's powerful series of illustrations on The Tab, or on her Instagram page and Facebook page.