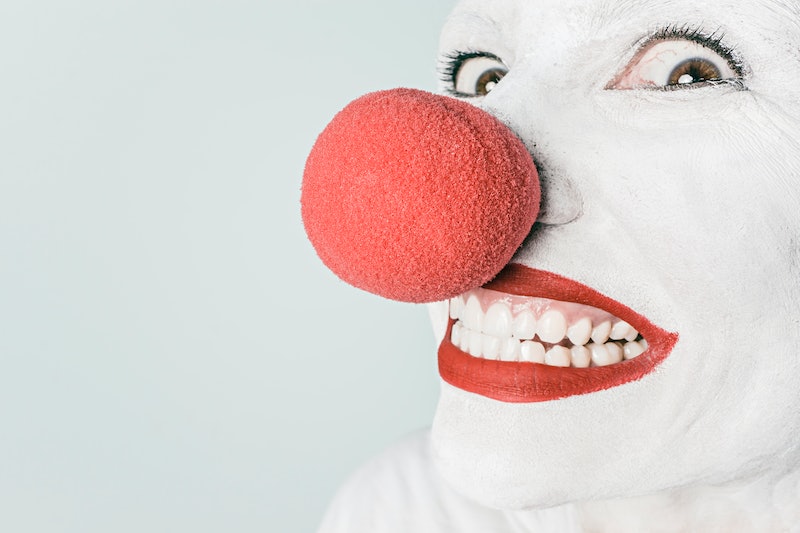 There are a lot of choices that go into Halloween planning — who you will dress up with, which party you will go to, how you will carve your pumpkins — and they all seem like pretty innocent decisions. But when it comes time to decide what you're going to dress up as this holiday, make sure it isn't one of the many (and unfortunately popular) offensive Halloween costumes out there this year. After all, Halloween should be about candy and mischief, not cruelty and misogyny.

Halloween is all about expressing yourself by pretending to be someone you're not. It's the time of year to embrace your silly side or your nerdy tendencies, to show off your pop culture prowess or your literary knowledge, or to try something completely spooky and scary. It's not the time of year, however, to be hateful, offensive, or insensitive, no matter how many new ways people find to be so every year. From culturally appropriative costumes to obviously sexist get-ups, Halloween has become a scary holiday not only because of its ghost and goblins, but because of people's rampant racism, discrimination, and general insensitivity to just about everyone out there.

So why, year after year, do people choose costumes that exploit other cultures or seek to alienate an entire gender? Or, more curiously, how is it possible they don't understand the serious issues underlying their behavior? The excuses range from "It was just a joke!" to "I'm making a statement," but the truth of the matter is simple: offensive costumes perpetuate dangerous and harmful cultural norms, and that's no laughing matter.

This is by no means a comprehensive list of the only costumes you need to stay away from, but it's a start. Have fun this holiday, but be respectful. This Halloween, avoid these 10 offensive Halloween costumes.

While you may think you're being clever with your "Any Candy Helps" cardboard signs, you're actually being incredibly insensitive when you "dress up" like a homeless person for Halloween. A serious epidemic in the United States, over 1.49 million people are homeless in this country and are struggling to find food, shelter, jobs, and healthcare every day. That is no laughing matter.

You see them every year — mariachi bands with fake mustaches and striped ponchos, groups of Geishas with heavily painted eye make-up and revealing silk robes, and Native American costumes featuring feathered headdresses and peace pipes. These culturally appropriative costumes actually disrespect the culture they seek to represent, and feed into the narrative of racial stereotypes.

3. Anything that requires a fat suit

Costumes that require fat suits turn an entire body type into a joke — one, I might add, that isn't funny. Bodies in all shapes, sizes, and colors are beautiful, and "dressing up" as a specific one to serve a joke is just simply offensive, not to mention insensitive, to the many body types you'll see while in costume.

4. A terrorist or suicide bomber

There are so many problems with this costume idea, I almost don't know where to begin. Not only does it perpetuate racial stereotypes by reinforcing the idea that a certain group or religion is responsible for all of the suicide bombings and other acts of terror in the world, but it can also be a trigger to survivors of attacks who see you out on Halloween. Your costume is supposed to be scary, not insensitive and psychologically damaging.

Unless you want everyone to look at you the way Tina Fey looked at the Emmys, avoid this offensive costume at all costs. When it comes down to it, nothing — nothing — about sexual assault is funny.

You would think that in the year 2016 this would go without saying, but blackface is never OK. Neither is any costume where you try and assume someone else's race for that matter, but this one is particularly problematic. Let Julianne Hough's 2013 costume stand as a reminder to you: blackface is degrading, demeaning, and straight up racist. Don't do it. Ever.

Though they have been around since the young girl's murder in 1996, JonBenét Ramsey costumes are once again making a comeback this year, thanks to the tragedy's 20 year anniversary and the press surrounding it. But from the fact that the case was never solved to the chilling reality that the girl was murdered, brutally, at age six, a JonBenét costume is extremely problematic.

8. Abusive athletes and their victims

When you pick your couple's costume this Halloween, ask yourself: is this harmful, damaging, insensitive, or offensive? If you're considering dressing up as one of the many professional athletes accused of or charged with domestic abuse, then the answer is yes. In the NFL alone, there have been nearly 100 cases of domestic violence since 2000, proving that there is a serious issue plaguing professional sports and the way they deal with violence against women. Don't feed into the problem by making it a game of dress up. Don't offend actual victims by downplaying their pain with fake black eyes and blood splatter, and don't trigger other victims of sexual and domestic abuse by parading your "costume" down main street. Nothing about violence against women is funny, clever, or even remotely appropriate, especially on Halloween.

A perpetually popular costume, you're bound to see at least half a dozen Hitlers running around Halloween night. Though many people now see him as a character — one who is often made the butt of jokes or the center of comedy skits — Hitler was, in fact, an evil man, a monster responsible for the persecution and death of 11 million people. Though certainly one of the scariest monsters known to man, he is not an appropriate Halloween costume.

Everyone appreciates a good pun, especially when it comes to costumes, but there has to be a line, and a pretty good starting point is where the joke meets sexism and sexual violence. From the "Drill Master" to the "Blow Here" breathalyzer to the "Bobbing for Apples" costume that conveniently places the apples around a man's genitals, these sexually aggressive costumes promote not only sexism and sexual objectification, but they also perpetuate rape culture. Halloween is supposed to be fun scary, not fear for your safety scary, but these costumes make it hard not to feel more like the latter.