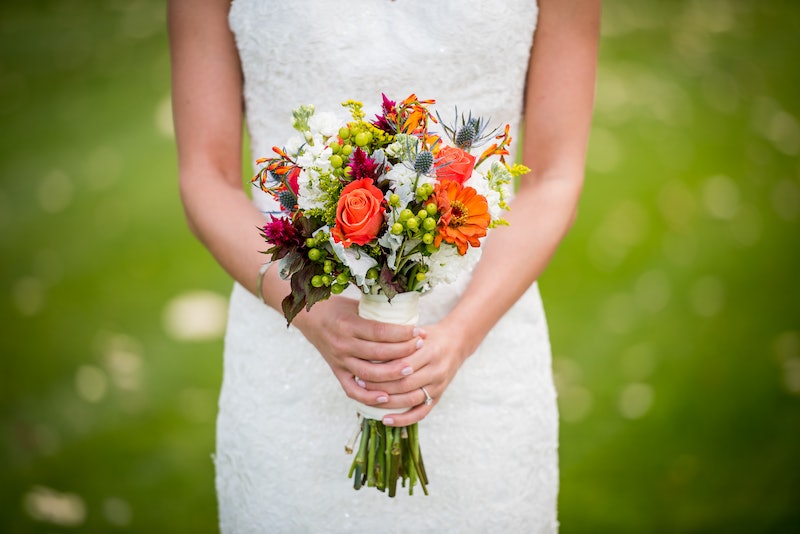 Now that my partner and I are just a few weeks away from the day we get hitched, I can safely say that planning the wedding actually ended up being a lot of fun. I found this somewhat surprising, and in the best of ways, at that — but along the way, I also discovered that there’s a sizable number of elements of the modern wedding that I had no idea were the norm. This was also surprising, although perhaps less delightfully so.

The reason why I was a little dismayed to find that so many of these elements are thought to be a given has a lot to do with the cultural expectations our society puts on weddings. There are a lot of opinions floating around out there on what weddings are “supposed” to be, as well as what they’re not “supposed” to be — and I would argue that all of these expectations puts an awful lot of pressure on people to have the “perfect” wedding. But weddings, like life, are rarely perfect; nor should they have to be. Both are messy because humans are messy, and that’s totally fine.

If you're down with these norms, awesome; it’s your wedding, so you do you. But throughout the planning process, what I’ve kept coming back to is this: Just because something is the norm doesn’t mean you have to follow it. Indeed, my partner and I ended up following almost none of the wedding conventions seen here. I’ve found it helpful over the past 10 months or so to remind myself periodically that whether your wedding includes these elements or not is completely up to you, and no one else — so consider this your reminder that breaking with so-called “tradition” is not only not a violation of etiquette (despite what some might like you to think), but moreover, that it’s perfectly, wonderfully fine.

In the meantime, though, can I just ask, was anyone else sort of bowled over to find that the following eight things are, in fact, Things? I just need to know that I'm not alone here.

“Bridesmaid proposals,” as they’re frequently termed, appear to be a relatively recent trend; I’ve been unable to pin an exact date on when they blew up, but the experience described by Jaya Saxena at Racked in June nails the somewhat curious nature of their timeline: The first time she’d been asked to be a bridesmaid, it happened in person, with a simple yet meaningful conversation, while the second involved getting a monogrammed tumbler with the words “Will you be my bridesmaid?” inscribed on it in the mail. Somewhere between those two instances, bridesmaid proposals became A Thing.

I am similarly bemused by them. To be fair, I knew going into the planning process that some people do elaborate bridesmaid proposals; it’s kind of hard to exist on the internet without having run into at least one on your social media feed at some point. But according to popular opinion these days, it’s moved from being A Thing People Sometimes Do to A Thing People Expect You To Do, and that’s a little weird to me. Not that I ever got the sense that anyone I knew expected me to do this, which is comforting (thank you, everyone!); however, I still kind of wonder if I made a boo-boo by doing the asking on the phone. (To my Maid of Honor: My apologies if I committed a major faux pas here.)

All Of The Stuff Your Wedding Party Is Supposed To Do

I haven’t actually been in a whole lot of weddings myself, which might explain why I was so in the dark about all of the things your wedding party is supposed to do — but good gravy, it sounds complicated. Here is a list of the many duties for which a bridesmaid is responsible, for example. I don’t know, man. I always thought they were mostly there for moral support and to help you hold your dress up when you pee.

How You Address Your Invitations

It seems that there are incredibly specific rules for the way you are supposed to address your invitations: Names and titles must be written a certain way, everything must be spelled out instead of abbreviated, all the bits of paper are supposed to be stacked in a particular order before you put them inside the envelope, you’re supposed to put everything in the envelope that actually gets stamped and addressed inside another envelope before putting the whole thing inside the first one… to me, it borders on absurd.

But even more absurd is the fact that apparently some people get really offended if you don’t address your wedding invitations in exactly the "right" way. I’ve commented on this before, but my personal feelings are that if someone is going to take umbrage with the fact that you abbreviated “Blvd.” instead of spelling out “Boulevard” on an envelope, they’re probably not someone you really want to hang out with anyway.

Not unlike “bridesmaid proposals,” I’ve been aware of the existence of wedding websites for quite some time — and I was also similarly surprised to find that the modern wedding considers them a necessity, rather than a nice option. Particularly for large weddings, yes, I can see how they’d be useful; however, not every wedding will need one, and what’s more, not every couple will want one. As such, I’m having trouble understanding why so many people are surprised if you don’t have one.

(For what it’s worth, my partner and I didn’t bother to create a wedding website; since our wedding is going to be so tiny, it just didn’t seem like something we needed. We’re in regular contact with the people on our teeny, tiny guest list all the time anyway, so we’ve just answered questions when asked and reached out for confirmation of specific details when needed. There haven’t been any major disasters yet.)

When people learned we were planning a wedding, I was honestly not expecting to be asked what my wedding hashtag is. I was not aware that it was a foregone conclusion that we would even have a wedding hashtag. And what’s more, as Ella Reily-Adams pointed out over at The Hairpin recently, wedding hashtags don’t actually appear to be that effective as a way to organize social media posts made during the actual wedding. I mean, obviously have one if you like — from what I gather, brainstorming the perfect pun on both of your names can be a really fun way to kick off the planning process — but also, feel free not to have one if you like.

According to A Practical Wedding by Meg Keene (creator of the website of the same name), unity candles didn’t enter the picture until the ‘70s — it’s not the centuries-old tradition that some might believe it is. For this reason, I do not feel bad about having had to Google “unity candle” the first time I encountered it during the planning process. The same goes for sand ceremonies, which are often cited as a contemporary variation on the unity candle, thereby implying that it’s even more recent than its fiery cousin. But hey, if you like the symbolism of either of these conventions — or of any other similar conventions, for that matter — then you do you!

Giving Your Parents A Gift

Not knowing about this one probably makes me a terrible person, but honestly, I did not know this was a thing. Now that I do know, I can see how in some cases, the tradition makes certain amount of sense; if, for example, your folks are the ones who actually paid for the wedding, then yes, a gift would be a nice way to say, “Thank you for footing this ridiculously large bill as my spouse and I sign a legally binding piece of paper.” But what if someone who’s not your parent is paying for your wedding? What if you’re paying for your own wedding? What if you’re on a really tight budget? Does it still apply? I have so many questions!

The Overly Complicated Mess That Is Wedding Gift Etiquette. Just, Y'Know, In General.

I have a lot of Thoughts (yes, with a capital T) about wedding gift etiquette, but what they all mostly come down to is, “That is b*llsh*t.” And it goes for everyone: Both for the people doing the giving, and for the people on the receiving end. Here is why.

For wedding gifts, the “rule” seems to be, “Technically you don’t have to give a gift… but you should really give a gift.” This is true even if you already gifted something for the wedding shower, and it’s true even if you’re not actually able to attend the wedding. What’s more, what a wedding gift “should” be seems to vary wildly depending on who you talk to: Some people will tell you that gifting physical items off the registry is fine for the wedding; others will tell you that the registry is strictly for the shower, and that actual wedding gifts should be money. And if you give money, apparently you’re supposed to give a certain amount (regardless of your financial circumstances) — and if you give less than that amount, it’s considered incredibly rude. Then again, there are also people who believe that asking for money instead of gifts is incredibly gauche.

All of this is very confusing to me, and it seems to put a lot of weighty expectations on something that maybe shouldn’t have them. And I can’t help but wonder if this is why we hear distressingly often of newlyweds chastising their guests for not giving a gift they deemed generous enough — and why it’s also upsettingly common for guests to give gifts that come with a whooooole lot of strings.

Personally, I think that gift giving should be much simpler than that, even if it’s a wedding gift: The way I see it, no one is ever automatically entitled to a gift, and giving a gift doesn’t automatically mean the recipient now owes you a favor. A true gift is never a requirement, and it never comes with strings attached. If both of those facts are not true, then it isn’t a gift.