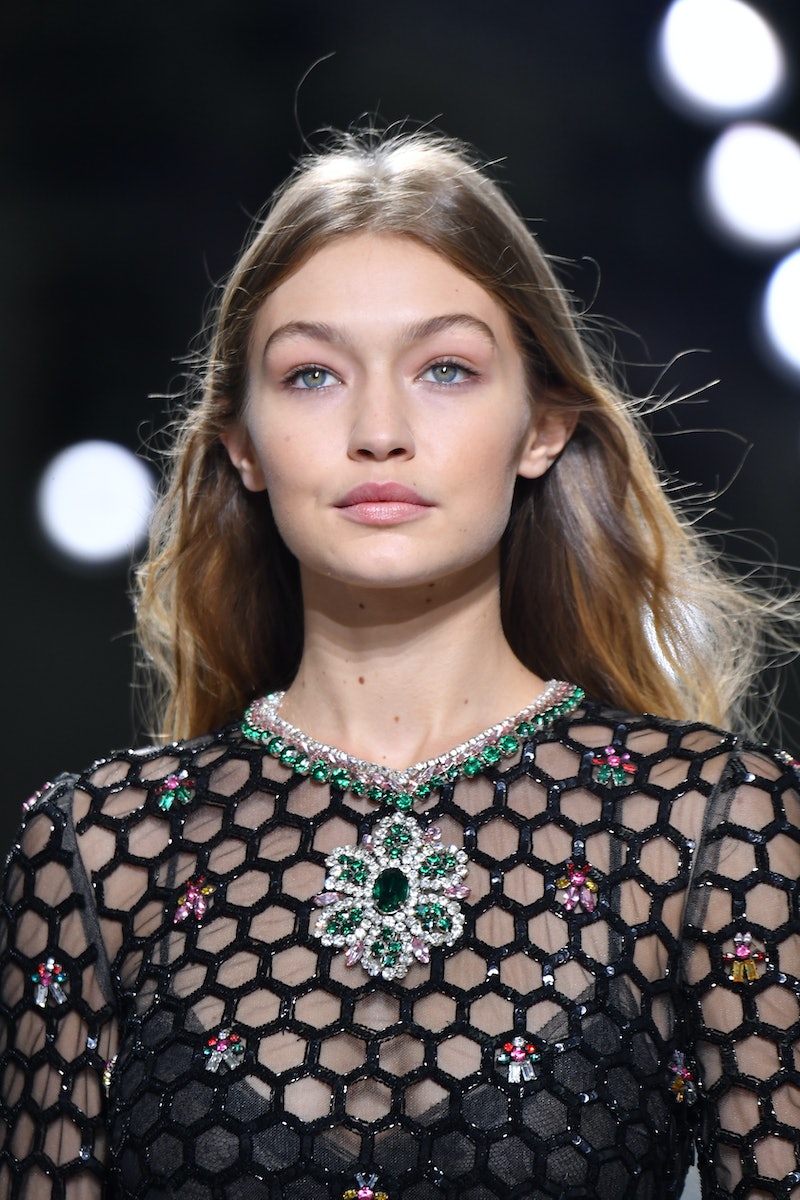 Following Kim Kardashian's armed robbery in Paris on Sunday, People reported that Gigi Hadid upped her personal security for the remainder of Paris Fashion Week. Bustle has reached out to Hadid's rep regarding this report, but has not heard back at this time. If true, this is a smart yet sad move, since the Kim K incident proved just how easily famous people's privacy can be invaded. It's frightening, to say the least. As for why she would be so cautious, Hadid made headlines for defending herself against a grabby fan less than two weeks ago. The incident occurred after a Milan fashion show, and while some criticized her for getting physical, she was simply standing up for herself and practicing self-defense. That same self-described "prankster" later tried to pull a similar stunt with Kardashian last week. While these "pranks" were seemingly unrelated to the aforementioned robbery, all of this is enough to create unease.

While celebrities put themselves in the spotlight, there definitely should be boundaries. Hadid's job as a supermodel is to walk runways, not to get attacked when exiting shows. Given the fact that she was targeted previously, it makes sense that Hadid would now take any cautions necessary. An exclusive source told People on Monday,

"It looks like [Hadid] has added two more bodyguards to her entourage. She left this afternoon’s Giambattista Valli show with what appears an enforced detail of three personnel."

It's pretty mind-blowing that this is what it's come to. While Hadid is continuing to strut the catwalk, her BFF and sidekick Kendall Jenner jetted home to be with her family — an understandable move, given the circumstances. Kardashian arrived in New York with husband Kanye West on Monday morning.

As a refresher, Kardashian was robbed at gunpoint on Sunday night by two men disguised as police officers. They reportedly took more than $10 million in jewelry from the reality star, as well as two cellphones and a purse. Her rep confirmed the news and said, "She is badly shaken but physically unharmed."

While Hadid is more than able to stand up for herself, it's always better to be safe than sorry. Upping her personal security is a necessary measure, given recent events. It's rather unsettling that these women are targeted for no reason, other than being famous. As she's said in the past, she can handle herself (see the tweets below), but she shouldn't have to deal with that. No woman should.

Here's hoping the rest of Paris Fashion Week goes smoothly without any further incidents. What happened to Kardashian is already way too much.