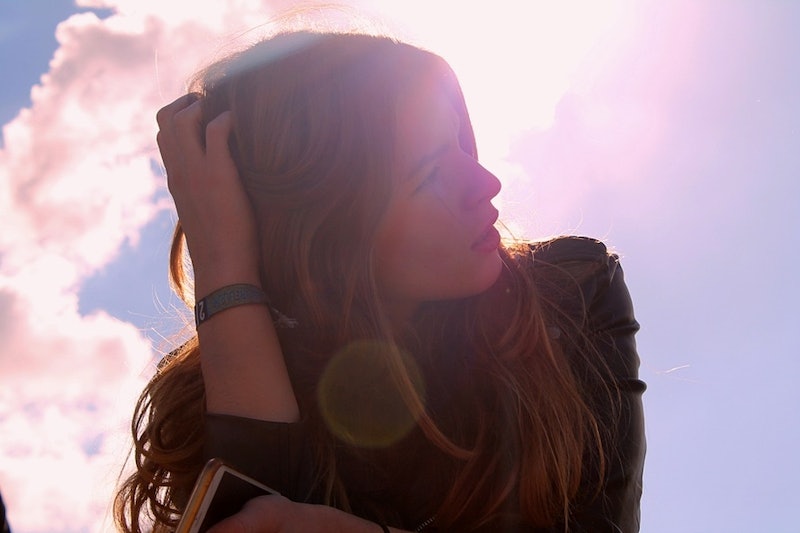 There are so many moments in the day where it's possible to take things too personally. Maybe the dude behind you in traffic honks aggressively, your boss dishes out some criticism at work, or your friend says she isn't in love with your outfit. For most people, these moments come and go without lasting effect. But for those of us who are extra sensitive, even the most benign comment can feel like a punch in the stomach.

Are you part of that latter group? If so, then it probably feels like everyone on the planet has pulled together to ruin your day. While this obviously isn't the case, I totally get why you might feel that way. People can be mean, and people can be thoughtless. When you aren't armed with the best self-esteem or an IDGAF attitude, then life can get pretty painful.

This is especially the case if you have social anxiety. "[Those with social anxiety will be] likely to believe people don't like them, people are talking about them, or that things are their fault," says Nicole Martinez, Psy.D., LCPC, in an email to Bustle. It magnifies the feeling, and makes it 100 times worse. Luckily, there are things you can do to challenge the feeling and stop taking things so personally. Read on for some ways to do just that.

It's easy to take things personally when you have a reel of hatred turning in your head. This is called negative self-talk, and it's your inner voice that says things like "I deserve to be treated this way," or "everyone is always mean to me." If this is so your brain, then start challenging it. Martinez tells me a great place to start is by making a list of your 10 best qualities and accomplishments. "Keep it somewhere with you, so that you can refer to it when needed."

Do you immediately assume the worst about everything everyone says? If so, you're pretty much guaranteed to feel hurt on a 24/7 basis. So do yourself a favor, and stop jumping to conclusions. "Don’t make assumptions about judgment or criticism seemingly directed at you," said Abigail Brenner, M.D., on Psychology Today. "Maybe it’s not about you at all, but rather about them and their own perceptions projected onto you." In other words, remember that most things people say ain't your problem.

3. See Things From Their Perspective

OK, so let's say someone has hurt you — or at least said something that feels hurtful. When this happens, it can help to put yourself in their shoes. "Try to understand what the other person is feeling/thinking/trying to convey to you," Brenner suggested. "Is this the way they interact with many people, not just you? Is it their usual way to be critical, to insult, to blame or shame?" It could be they just doesn't know how to interact like a polite human being. Realizing this will make it easier to take their comments with a proverbial grain of salt.

4. Ask Yourself Some Qs

If you've made a habit of feeling hurt, start asking yourself some questions. "Stop and really ask yourself, am I responsible for this, or is there anything I could have done to prevent it? Did I try my absolute best? Has anyone actually said anything to me that reinforces how I feel about myself? If they have not, have a look at your assumptions, and what you assume about yourself," Martinez says. Then refer back to tip number one.

One of the cool things about being a grownup is the realization that no one has control over your emotions. (Which was, of course, way easier said than done when you were younger.) Realizing this means you don’t have to give away your power to anyone, according to health guide Merely Me on HealthCentral.com. And it means being 100 percent in control of your emotions, from now on.

6. Quit Hanging Out With Toxic People

Do you feel hurt all the time? Then make it point to banish all toxic people from your life. "Toxic people are quite skilled at personal attacks," said Me. "These are the people in your life who drain you of emotional energy." Instead of dealing with their crap and feeling bad, tell them to GTFO. Surround yourself with good, healthy people instead.

7. Work On Boosting Your Self-Confidence

Kicking people out of your life can be tricky, especially if you have less-than-stellar self-confidence. So do what you can to gain some self respect. "Start positive daily mantras," Martinez suggests. Or challenge that negative self-talk. If you can have a better relationship with yourself, what other people say and do won't feel as painful.

8. Know What Pisses you Off

If everything hurts your feels, then this one may be kinda difficult. But most of us have a few hot button topics that are almost always soul crushing. "Some sensitive areas may be one’s weight, making mistakes, or any perceived faults," Me said. "The key is to not allow yourself to get sucked into feeling your old wounds open when these topics are brought up." If they are, adopt a c'est la vie attitude, and let the feeling pass.

You know how weird things fall out of your mouth all day long? Well, the same is true for everyone else. So if someone says something particularly dumb, try to give them the benefit of the doubt. After all, "what people say is always more about themselves than anyone else," Me said. Or, it's just something they blurted out and didn't mean.

The next time someone amazes you by dropping a particularly asshole-ish comment, take pause and think about why they might be acting that way. "You don’t always know what another person is going through," said life coach Carol Morgan on HuffingtonPost.com. Maybe they just got dumped, or spent the morning dealing with a flat tire. It doesn't give them an excuse for being rude, but thinking this way can help you deal.

Sometimes there's no explaining why someone else sucks, or why you feel hurt. All you can do, when this happens, is to move on. As Morgan said, "... the more you dwell on it, the more you make yourself crazy." Put it behind you, and get to feeling better.

Because that's what this is all about. Not taking things so personally will make your days 100 percent better. So pick up this skill, ASAP.

More like this
Isa Guha Is Taking The Lead
By Charlie Mock
The Spiritual Meaning Of Angel Number 000, Explained
By Kristine Fellizar
10 Ways To Be More Empathetic To Your Partner
By Raven Ishak and Lexi Inks
Think Your Partner Is Cheating? These Tarot Cards May Confirm Your Suspicions
By Kristine Fellizar
Get Even More From Bustle — Sign Up For The Newsletter