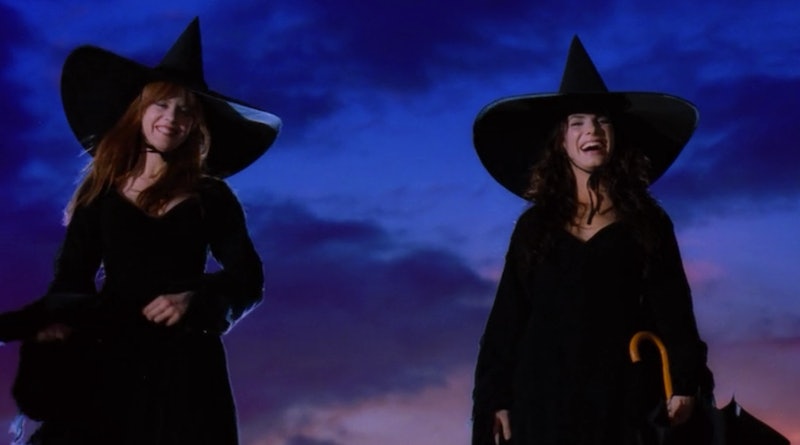 I'm a huge fan of Halloween movies. Whenever October rolls around, aside from getting out my decorations and grabbing a giant pumpkin to carve, I love to cue up my favorite films. From The Nightmare Before Christmas to Hocus Pocus, to The Addams Family to Beetlejuice, Halloween movies from the '90s hold a specific place in my heart. But one of my favorites in particular stands out from the rest in that it celebrates sisterhood and feminism much more than the others: 1998's Practical Magic, starring Sandra Bullock and Nicole Kidman. It might not have the scares or the comedy that other popular Halloween movies of the era do, but it deserves praise for its varied and great female characters and the strong message it sends about the bonds between women.

Practical Magic tells the story of Sally (Bullock) and Gillian (Kidman), the powerful Owens sisters who are descended from a long line of New England witches. Based on Alice Hoffman's novel of the same name, though tonally much different, the film has a main plot that finds the witch sisters working together to save Gillian from an abusive boyfriend... and his ghost. With a cast of six lead actors — the Owens sisters, their two wise and skilled aunts, and Sally's two daughters — the movie is filled with women, and the dudes are just supporting players along for the wild ride that comes with being connected to the female leads. As one nosy townsperson remarks in the movie, "If any man dare take on an Owens woman, he'll live briefly in the euphoria of her love before meeting an untimely death."

Halloween movies tend to fall in a few genres. There's the violent thriller, where women are often the victim of a psychopath murderer, like Halloween or Scream. Then there are the haunted ghost stories, like the Paranormal Activity series, but they can hardly be excellent examples of feminism when most of the female characters scream in terror and simply react to the horrors around them. Even the comedies, like Beetlejuice (which, don't get me wrong, is classic and wonderful) often don't have a message as feminist as Practical Magic does — a message that highlights the importance of maintaining female relationships no matter what adversity is faced, and fighting for your sisters and friends when threatened.

Sally and Gillian have their differences, and so do Aunt Jet (Dianne Wiest) and Aunt Frances (Stockard Channing), as well as Kylie (Evan Rachel Wood) and Antonia (Alexandra Atrip), because all sisters do. All women do, no matter how their friendship dynamics work. But rather than turning women against one another like other witch movies such as The Craft or Suspiria have done, Practical Magic shows its women resolving their issues, working together, fighting for one another, and remaining in tight bonds. Sally and Gillian couldn't be more different; one (Sally) is a mom who stayed in her hometown and strives to be a model citizen, despite how the townsfolk look down at her entire family tree. Gillian, meanwhile, is a free-spirited wanderer with multiple lovers and a sparky attitude. But they're blood, and the blood oath they share at the start of the movie comes into play at the end, when the men who threaten their relationship find themselves facing a feminist power they never anticipated.

In that essence, Practical Magic captures a lot of what's at the root of some Halloween lore. If you examine the Wiccan background of witches, focusing on the mother goddess or a feminine spirit, you'll find that a lot of magic, new age, and mystical traditions put an important emphasis on female bonds. Covens of witches are usually made up of multiple women, and many women who have converted to Wicca do so because many mainstream religions focus on a patriarchal system. So while a lot of "witch" movies find women being nasty, turning against one another, or worshiping the Devil, Practical Magic, even as a '90s rom-com, stands out from the crowd by maintaining a sisterly bond, having a feminist kick, and giving voices to six unique women.