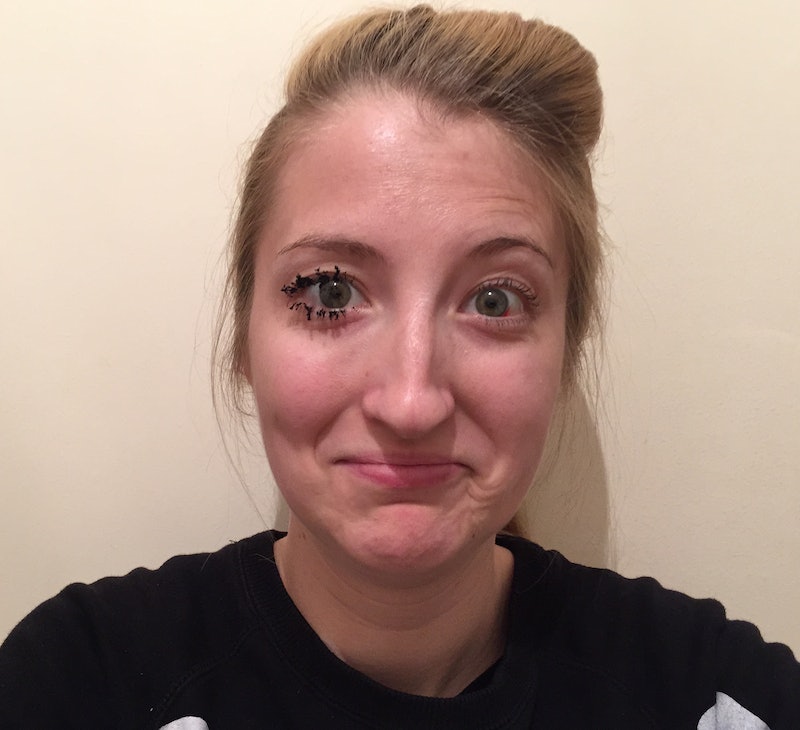 After I was defeated by the 100 coats of nail polish challenge, I said I'd never do one of these viral beauty challenges again. The truth is, I am the curious sort, so naturally, I had to try the 100 coats of mascara challenge — for no other reason than I just had to know what would happen.

I know, I know: If I keep doing these challenges, one day you're sure to find me in my apartment with a swollen face, covered in beauty products, rocking in a corner whispering, "Just one more layer." Until that blessed day, I'm going to keep doing these experiments, because my curiosity is a never-ending itch that constantly needs scratching.

So, for inspiration, I headed over to YouTube to check out some folks who'd completed the 100 coats of mascara challenge and I stumbled across the amazing Nicole Skyes, who decided to find out how many coats of mascara are in a tube. Like Nicole, I realized I'd need a fresh tube of mascara to complete this challenge, because I had no idea how much was left in my everyday tube. I opted for Barry M's Lash Vegas Mascara, that I'd summised to be vegan and cruelty-free. After my speedy shopping trip, I psyched myself up, prepared my tally sheet, was ready to begin. Before you see mine, here's another beauty vlogger tutorial for reference:

I prayed that I would still be left with lashes at the end of my ordeal, but I was contemplating life without them, just in case. Here's what happened when I tried the 100 coats of mascara challenge.

I decided to keep one eye with one coat of mascara and do the challenge on the other eye. I decided this because it would be cool to compare the two eyes at the end.

I'd never tried this mascara before and I was excited to get started. To make it as fair as possible, I literally only did one coat of mascara on each "area" of my lashes. In other words, I tried not to go back in with the wand and perfect certain lashes. This way, I could make sure I wasn't going overboard with the coats.

At 10 coats, I thought it didn't look so bad, although my lashes were starting to clump together a little.

I began checking when my lashes had dried by sweeping my finger on them, but I soon realized I'd have to wait a little longer in-between coats. However, it wasn't too long, nor was it a patch on the three minute wait period between coats that I endured in the 100 coats of nail polish challenge.

At 20 coats, my eyelashes were starting to resemble spider legs and it was not a pretty sight. When I got to around 23 coats, the mascara wand was beginning to drag and get caught, so I had to pull it through my lashes. I was feeling gross at 25 coats and my eyesight was not very clear.

By the time I reached 30 coats, I felt as if my eyelashes had a mind of their own and they were growing, but not in a good way. Around the 32 coats mark, I started to feel like I was building on top of what I can only describe as "crumbles." As you can imagine, when I hit 40 coats of mascara, I felt vile and somewhere between 40 and 50 coats, I began to feel like Alex from A Clockwork Orange.

At the halfway mark, things were starting to get serious. Huge clumps were forming and I felt worried that my eyelashes would be stuck like this forever. When I hit 55 coats, I began to feel itchy, which concerned me a bit, but I felt like I couldn't stop because I'd exceeded the halfway point. Then, when I was nearing 60 coats, I suddenly wondered if I was brushing the clumps off, so I decided to go more gently.

At 60 coats, it was getting harder and harder to see and by the time I reached 70 coats, I literally didn't know if any of the product was sticking to my "lashes" anymore. When 73 coats came around, I noticed my eyelids sticking together when I blinked, so I tried to refrain from blinking often because the idea of my eye being sealed shut seriously freaked me out.

Looking back, I can see that the product was definitely sticking, because at 75 coats I looked like a hot mess. When I reached 82 coats, my hand began aching from holding my mirror and mascara in the same position and when I got to 85 coats, I began to worry that my mascara was running out.

At 88 coats, I put my glasses on and felt my lashes touch the lenses. Then at 92 coats, I realized (too late) that the clumps were coming off onto the lenses. So I took them off because there was no way my glasses were going to come in between me and victory.

At coat 93, my fiancé took one look at my eye and said, "That is f*cking disgusting. Why would anyone do that?" To which, I had no logical answer. The remainder of coats were a blur of ecstasy, with the finish line in sight.

I was elated to reach the end of this challenge, but it had come at a cost: My eyelashes were unrecognizable and had joined together in a big, gloopy mess.

Here you can see the difference between 100 coats of mascara and a regular single coat. With the crazy coats on one eye (and the burst blood vessel in the other) and Halloween right around the corner, I could pass for some kind of vampire tarantula queen.

This was the part I was dreading most of all. I grabbed a baby wipe and dove in, quite concerned that I would be left with eyelash-less eyelids I took the first wipe and not much happened; a little flutter of panic arose in my chest but I ignored it and continued.

After the initial wipe, I was pleasantly surprised that the rest of it came off in clumps and I managed to remove all of the mascara with relative ease, using only two baby wipes.

Yes, this entire mess was caused by my own curiosity, but allow me to spare you the same crumbly, uncomfortable fate and tell you not to try this at home. If you must, make sure that you've got brand new tube of unexpired mascara, and be incredibly careful while maneuvering around your delicate eye area. As the spirit of inquiry almost killed my eyelashes, it's safe to say I will never be doing this challenge again.