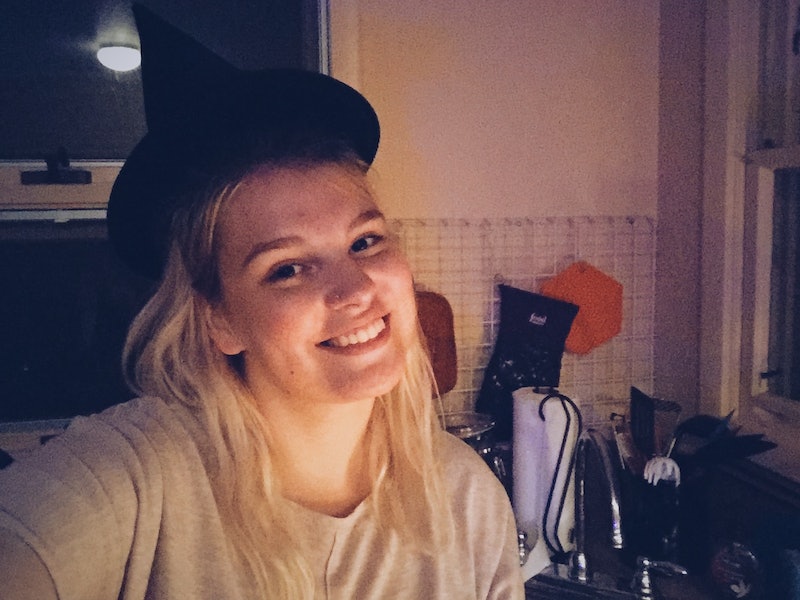 "Can we make a love potion?" my friend Ryan asked me from across the wooden table at our weekly Tuesday bar sesh (#college). We d just spent the last 20 minutes analyzing our astrological birth charts which naturally led to us planning a meetup on Thursday to read tarot cards in my room. One thing led to another, and suddenly Thursday was looking pretty witchy when someone decided it'd be a fun idea to find a local Wiccan store and try our hand at some ~magic~.

Although we ended up nixing certain original aspects of the plan, like using a Ouija board and drinking absinthe, I couldn't get the idea of the love potion out of my mind. I'm a spiritual person who's always been interested in Wicca and what it means to be a witch in the real world, so the prospect of delving into potion making head-first with my friends excited me. Could I finally fulfill my childhood dreams of being a witch? Would the spell actually work? What does this say about me if I genuinely think it might?

Wednesday morning, everyone still seemed pretty psyched about our spooky plans so I decided to ask the group if they were seriously down to brew up some love. Ryan immediately volunteered himself as the guinea pig and I found a spell that seemed doable.

I still felt a little unsure of myself, so I asked my Pagan friend if she had any advice. Since I sent my question in a group message, our other friend Julz jumped in to stop me. "Are you prepared for him to love you? That's serious. Don't play him," Julz cautioned. But I already made up my mind and was moving forward with my plan to make a love potion IRL.

At 6:30 p.m. on Thursday, Ryan and two of our friends piled into the back of my roommate Ellen's Volkswagen Beetle and the five of us took off to the local Wiccan store, Earthbound Metaphysical Shoppe. I asked Ryan again if he was OK with falling in love with me, and he held his ground. He was going to drink the love potion even if it killed him.

I drifted through the shop and hovered by the pendulums. For some reason, I really wanted one. I turned around and Ryan's engaged in conversation with the store clerk, asking about how the little quartz contraption in my hand actually works. The man summoned me forward, taking the pendant from my hand and showing us how to use it. With his right hand, he held the pendulum still above his left palm before asking it, "Show me yes." The pendant started to swing back and forth. He then said, "Show me no," and the stone change direction and moved side to side.

Ryan and I stood mesmerized for a moment. I set all of my new belongings on the counter and let the clerk know I was ready to pay. This set off a panic in Ryan, who then realized he wanted to buy something but couldn't decide what. With Ellen's help he settled on a blue candle and the store clerk turned to me, motioned to my excitable friend and said, "You're going to have to watch out for him."

Ryan returned with his little wax stick and the man asked if he knew how to meditate. Ryan's eyes went wide as he let out a long, "Uhhh." The clerk turned back to me and said, "Oh man. You have a lot of work ahead of you with this one."

By 11 p.m., Ryan, five of our friends and I sat in a circle on my bedroom floor engulfed in the soft glow of candle light. I pulled out my tarot cards and started shuffling.

Since it's my deck of cards, I was the in-house medium whose job it was to read what everyone had in store for them. The readings seemed pretty inspirational — until it was Ryan's turn. With every card came another warning against falling in love. I tried to convince him and myself that it didn't really mean anything.

I finished up everyone's readings and we decided head downstairs to start brewing. I walked over to Ryan who's sprawled across my bed. "Are you ready to fall in love with me?" I ask as I reach out my hand to help him up. He takes it and responds with an enthusiastic, "Of course!"

The potion I decided to make was called, "Love Potion Number Nine" and required nine of all of the ingredients and nine candles.

Instead of basil leaves, I used nine pinches of ground basil because I already had that in my kitchen. The potion also called for cloves, apple seeds, and red rose petals. I also needed nine drops of red wine, vanilla extract, (Capri Sun) apple juice, and strawberry juice, which I took to mean "squeeze a strawberry nine times." I also needed one ginseng root cut into nine equal pieces, but I couldn't find it so I cut open a ginseng tea bag and threw in nine pinches.

With my candles lit and the burner on, I stir the ingredients together nine times while saying, "Let the one who drinks this wine shower me with love divine, sweet love potion number nine make his love forever mine."

After bringing the mixture to a boil, I reduced the heat and let it simmer for nine minutes. Honestly, witchcraft felt just a little too much like normal cooking and not enough like the magic I've come to expect from a childhood filled with Harry Potter.

Finally the timer dinged, and I took the pot off the heat and blew on the concoction nine times. I then blessed it with the names of nine goddesses which kind of just sounded like me butchering a bunch of words and then saying "please bless this, thanks."

The potion actually turned into a weird melted mixture of rose buds and goo, so I ended up just mixing a bit of it into a cup of nine squirts of apple juice. I strained it once more to get rid of any little floating bits and it was magically ready to drink.

Step 4: Drink And Fall In Love

"It tastes good. It tastes like apple juice," Ryan said after I finished feeding him the love liquid. I started clearing up some of my kitchen space and handed Ryan the half-full pouch of apple juice that I used as a base.

After straightening up, I rejoined my friends and asked Ryan if he's in love with me yet. "I have to finish this Capri Sun first and then we'll be in love," he said. Once he tapped it off, he immediately started cracking jokes about being in love with me.

The problem with joking about something constantly is that it'll eventually start to feel like reality.

The running gag followed us throughout the whole night, which I'll admit, was actually pretty fun. Even though our group of friends were present during the entire experience and knew what was going on, they lost interest in Ryan's and my love affair real fast, and it became this continuous inside joke that only he and I cared about.

But the problem with joking about something constantly is that it'll eventually start to feel like reality. Not much longer after Ryan drank the love potion, some of my roommates went to bed and the remaining group members decided to go over to Ryan's house. At some point during the two-block walk, he turned to me and said, "You're so attractive right now." In the back of my mind I knew he was kidding, but for some reason it didn't feel like he was. I laughed it off and we kept walking.

As the night went on, some of our friends headed home and our hangout session quieted down. Ryan and I shared a blanket with his head resting on my shoulder when he and I agreed that if we're yin and yang, he gets to be yang and I'm yin. He then remembered I brought the pendulum and asked to see it. He held it still above his left palm and asked it, "Show me yes." As it suddenly swung forward and backward, he said, "Show me no." The pendant swung side to side. He then asked, "Did the love potion work?" The pendulum once again starts to swing back and forth.

So, did the love potion actually work? Well, kind of. I saw Ryan two days later and everything felt pretty much the same between us. But even though he didn't necessarily develop any ~romantic~ feelings for me, I still think the experiment was a success.

First of all, I know I definitely love having Ryan in my life even more now that I know he's willing to drink some weird mix of apple juice and melted rose buds to help me out. Second of all, we're both nostalgic people and this is one of those nights that we're going to talk about forever. So even though we won't be getting married anytime soon, we've developed a stronger friendship and gained a new experience that bonds us together, and I think Ryan and I would both agree that that's something to love.

Making a love potion was certainly a memorable experience, and I'd recommend it to anyone looking for a unique way to hang out with their friends. I'm the kind of person who believes that things like this could actually work, but even if you're a skeptic, there's really no harm in trying. Of course, if you're going to put a love spell on your friend, don't do it without their consent. Whether you believe in magic or not, you shouldn't ever attempt to make someone fall in love with you if they aren't down for it.

But if you and your friends are all willing to try out this experiment, just try to embrace the experience for what it is. Even though the potion may not brew up any sort of romantic feelings, it will remind you and your friends of the love you already have for each other — and that's pretty magical.