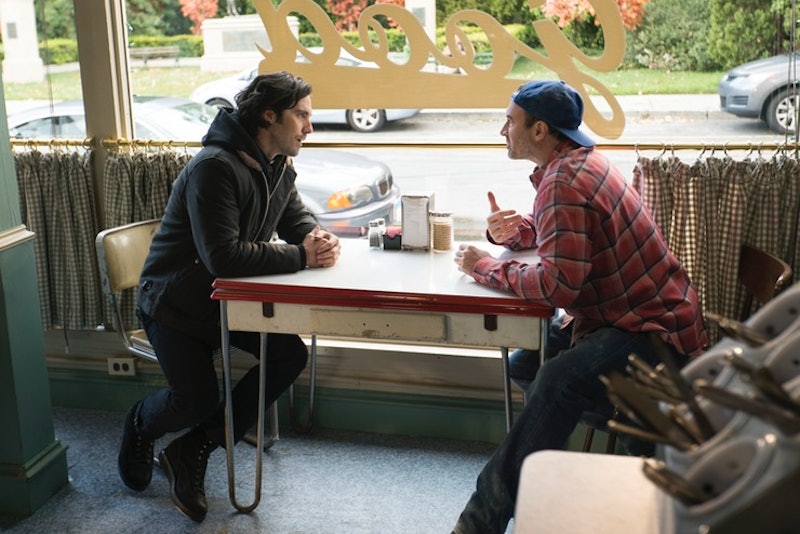 With the Gilmore Girls revival only weeks away, fans of the show are getting extremely excited. Plus, Netflix has spoiled us by releasing some intriguing photos of the cast of Gilmore Girls, raising lots of questions regarding the storylines featured in the new episodes. Milo Ventimiglia appears in one of the stills taken from the final episode of the revival, "Fall," which is significant because it shows that Jess is in the Gilmore Girls revival finale. While some fans have speculated that this might mean that Jess is the boyfriend that Rory chooses, I think that the new Gilmore Girls photos could mean Jess and Rory don't actually end up together.

As a big supporter of Ventimiglia and of Jess, it pains me to say that Rory and Jess might not end up together, but all of the evidence to date seems to suggest that they're not endgame. The fact that there haven't been any official photos of Matt Czuchry released makes me think that his role in the Gilmore Girls revival is being kept tightly under wraps. It's more than a little strange that we've seen a photo of Jess, but not one of Logan, and could be proof that Rory doesn't end up with Luke's nephew after all.

Ventimiglia appears in three of the new Gilmore Girls episodes, so it's likely that he plays a pivotal role in the series and might even be back to pursue Rory. However, we also know that filming of multiple episodes took place in London, which happens to be where Logan has been living, and suggests that his role in the Gilmore Girls revival is just as significant. The fact that we've not seen a photo of what Logan looks like in the Netflix reboot is very suspicious, and might mean that his story line in the new episodes of Gilmore Girls is top secret.

There are several reasons that Jess could be back in Stars Hollow, the main one being that Luke still lives there. With family based in the town, his visit might not have anything to do with Rory. He could be back for a wedding, the birth of a baby, or to help out at Luke's Diner. However, any appearance by Logan on the show is likely to be more focused on his relationship with Rory. While I'm excited to see the chemistry between Rory and Jess once more, I don't think the new photos bode well for their relationship, especially as Czuchry is coming back for all four episodes. How is he there for all the episodes and yet not featured in a single of the stills we've seen so far? Clearly, there's something we're missing.

Another clue as to Ventimiglia's role in the Gilmore Girls revival is the fact that he's spoken quite freely about his character. The actor told E! in May 2016 that Jess "pops back into Stars Hollow and he kicks up dirt like he always does, in a very nice cloud that will help other characters along in their life." While his role sounds instrumental to several story lines in the show, it doesn't sound like he's definitely sticking around. Czuchry, on the other hand, has stayed pretty silent regarding his role in the Gilmore Girls revival, which seems to hint that Logan has a very important part to play. Perhaps one which Netflix want to keep under wraps until they release the new episodes.

Luckily, all episodes of Gilmore Girls: A Year In The Life are released on Netflix on Nov. 25, so we won't have to wait much longer to find out once and for all whether Rory ends up with Jess or Logan.