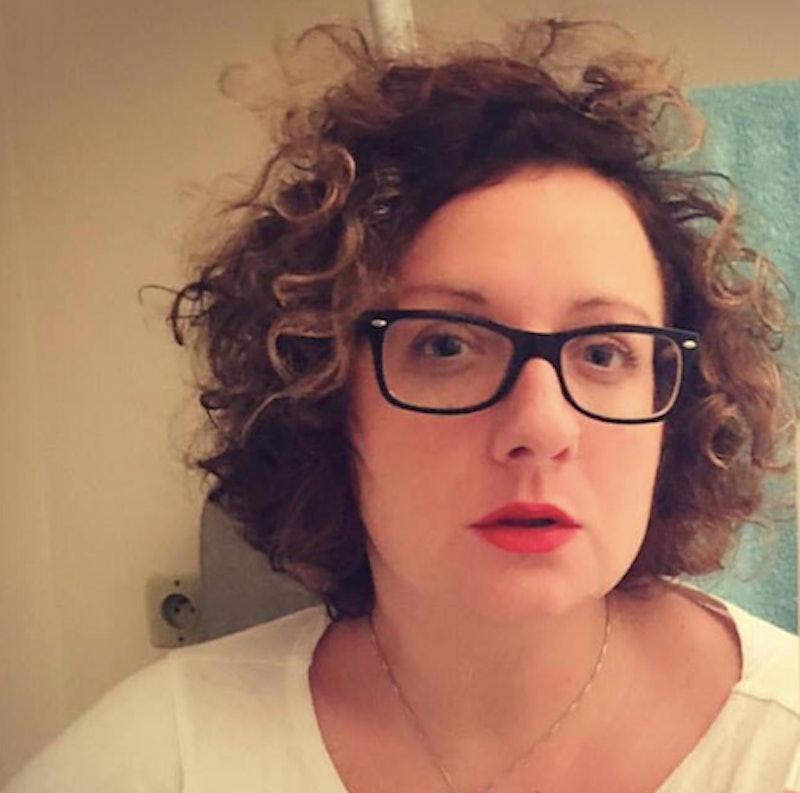 So I just accepted that, at least when it came to orgasms, I’d forever be in the 75 to 80 percent of women who need clitoral stimulation to climax. Which was fine. Although I remained somewhat jealous of those who had enjoyed another type or orgasm, I realized I needed to consider myself lucky to even orgasm at all, because some women just never do.

Then something magical happened recently.

After 18 years of being sexually active, I finally had my very first vaginal orgasm. I know it was vaginal, because it felt different, deeper somehow, and my clitoris was not being stimulated in any way at the time. But what was being stimulated was my G-spot. As I felt the sensation build, as it does with a clitoral orgasm, my immediate thought was, “OMG. It’s happening! It’s my time! My time! My time down here!” Which inevitably made me think of The Goonies, but then I brought my focus back to what was going on in between my legs. Once I actually said the words out loud, “I’m going to come,” there was no doubt in my mind what was happening: I was having my first vaginal orgasm and it felt AMAZING.

So how did I do it? Well, this is how I managed to experience my first — and hopefully not last — vaginal orgasm. I’m not promising that this will work for everyone, but here's exactly what led me there.

We Used A Cock Ring

Over the summer, I got a box of sex goodies from Unbound Box. It contained a bunch of things, I knew I’d definitely use at some point. One of the items happened to be Je Joue Ooh, a mix and match line of vibrators. In that mix and match collection was a vibrating cock ring, something my partner had never tried, but was totally willing to give a shot. Honestly, when he had it on, it looked a bit funny, because it had a little light. But once we got all the jokes out of the way, he turned it on, and we got down to business.

We Opted For The Spooning Sex Position

Before we actually got into position, we debated which was going to be best. (Keep in mind, we weren't aiming for me to have a vaginal orgasm, but just play with the cock ring.) I suggested doggy style, which resulted in a grimace from him. Instead, we went with one my favorites, if not my most favorite, the spooning sex position. Spooning is ideal for G-spot stimulation, which, ideally, can lead to the mythical vaginal orgasm, which again, was not my intention. I think we were both just being lazy and wanted to lie on our sides.

Most of the time with any type of sex from behind, my male partners have always moved with in-and-out movements that tend to be constant. But with this particular partner, although he also did the whole in-and-out thing, on more occasions, he pulled himself very deeply inside me and held himself there, snug against my G-spot — with his vibrating penis, thanks to that the cock ring, literally massaging that part of my body to a level of intense stimulation. Then he’d pull back a bit, but then do it again, holding himself there. The only appropriate word for how it felt, at least at that stage, is delicious.

I Didn’t Focus On Having An Orgasm

When we had had sex about an hour earlier, I was really set on having an orgasm. I had it in my head that I really wanted to climax. Not just because I wanted an orgasm, but because I wanted to have one with him. Sex with him, even without an orgasm is great, but of course, the orgasm is the icing on the cake. However, during that first romp, I was so focused on reaching orgasm, that I just didn’t. But the second time, when we used the cock ring, I didn’t focus on anything. I just let my brain sort of turn off and absorbed the sensations.

Once I realized what was happening, I didn’t freak out. As much as I wanted to yell out, “Hallelujah! I’m having my very first vaginal orgasm,” I refrained from doing so. Instead, as I listened to him moan in my ear, knowing that he was having his orgasm at the same time, too, I pushed my hips back against his pelvis, to feel him deeper inside me, while we both finished. In fact, even afterward, still in shock, I didn’t even mention it to him. I can’t even remember what we talked about, because I was still on cloud nine and didn’t want to fall off just yet. Oh wait... we talked about the election. Silly me; how could I forget?

Will this be a regular thing for me, because of this one time? I don’t know. I’d like to hope so, but I also know that if I focus too much on it happening again, it might not. At least now I know, first hand, that the vaginal orgasm is real. It just pops when you least expect it. So, basically, never stop reaching for the stars.

More like this
The Best Time To Date After A Breakup, According To Experts
By Bustle Editors
How To Do The Intimacy-Boosting Lotus Sex Position
By Laken Howard and Lexi Inks
What Is The Forest Personality Test? The TikTok Trend, Explained
By Georgina Lawton
Expert Tips For Being On Top When You're Plus-Size
By Lexi Inks
Get Even More From Bustle — Sign Up For The Newsletter