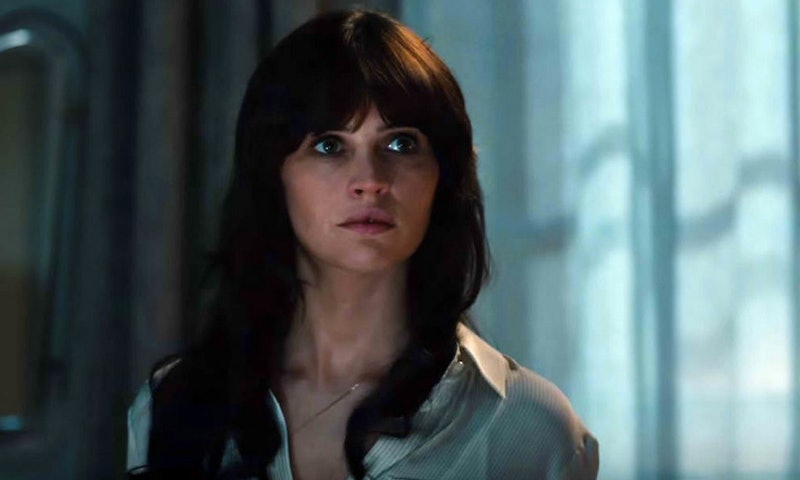 You may have noticed something about the poster for the latest Dan Brown movie, Inferno . Unlike the previous film in the series, Angels & Demons, which had Tom Hanks' name stretched across the top of its poster, Hanks' co-star Felicity Jones appears to get equal billing across Inferno's promotional materials. Now, a great deal of that co-ed promo can be attributed to the fact that Jones is about to star as Jyn Erso, the second female lead in a Star Wars film, when Rogue One opens in December. However, the other side of the story likely stems from the fact that (without spoiling too much of the film for you) Jones' character Sienna plays a rather complex and sizable role in the unraveling of Robert Langdon's latest historically-inspired mystery in Inferno.

And when I spoke to the film's director, Ron Howard, at the junket for the film at Fort Belvedere in Florence, Italy, Howard seemed to truly understand that audiences are no longer content with men dominating the plot in blockbuster films, and that bringing richer female characters (like the film's own Sienna) into these stories is essential.

"The medium of the movies is changing and evolving — audiences are getting smarter by the minute," he says. "Women are becoming more and more important to the movie-going population, but also television has so many great female characters. And it's showing us that audiences crave it. And it's not just women; men can be fascinated by cool female characters as well, of course. And yet, you gotta see proof of it."

Sure, Howard is kind of preaching to the choir here: Of course audiences also like seeing women (we make up half the population after all) and of course men like complex female characters too (see the previous "after all"). But Howard's last assertion is the real sticking point for me, because the director isn't wrong about needing to offer proof that we, the movie-going public, crave complex women onscreen.

Just look at all the weight placed on the shoulders of Paul Feig's all-female Ghostbusters remake this summer. If it did really well, it had the potential to prove — with its mountains of cold hard cash — that audiences craved a better balance of narratives, meaning we'd see a lot more women on the big screen. But if it didn't do well, the exact opposite effect was feared: Ten years of no female action heroes for us. Ghostbusters wasn't as huge as many women hoped it would be, though it is the 13th highest grossing film of 2016, and luckily, female-led potential blockbusters in the post-Ghostbusters landscape appear to still be on track: the all-female cast of Ocean's Eight is trucking right along and the potential for that Black Widow movie fans are begging for keeps picking up steam. The world of female action heroes didn't implode. Still, these kinds of stakes don't exist for male-led films — no one wonders if Tom Cruise will get to do another expensive blockbuster next time his shiny action movie doesn't shatter box office records or if The Rock will be allowed to stand at the center of another action comedy.

Unfortunately, the need for "proof" (as Howard put it) to bring more complex female characters to every cineplex in America didn't quite hit the mark in 2016. Of the top 20 highest grossing films of the year, only four were led by women and two of those women were voices of animated animals. Zootopia and Finding Dory, featuring the voices of Ginnifer Goodwin and Ellen DeGeneres, rose to the top while Bad Moms and Ghostbusters came in lower on the list with still respectable box office culls. This isn't exactly the proof we were looking for.

So while Howard is right that the industry tends to see changes on a bigger scale when large audiences show up to the theater to support the faces of that change (need I remind everyone of what happened after Bridesmaids made piles of money at the box office?), here's hoping that having someone like Jones starring in his latest film, part of one of the most beloved mystery film series around, tips the scales in the right direction.

Inferno is in theaters October 28.