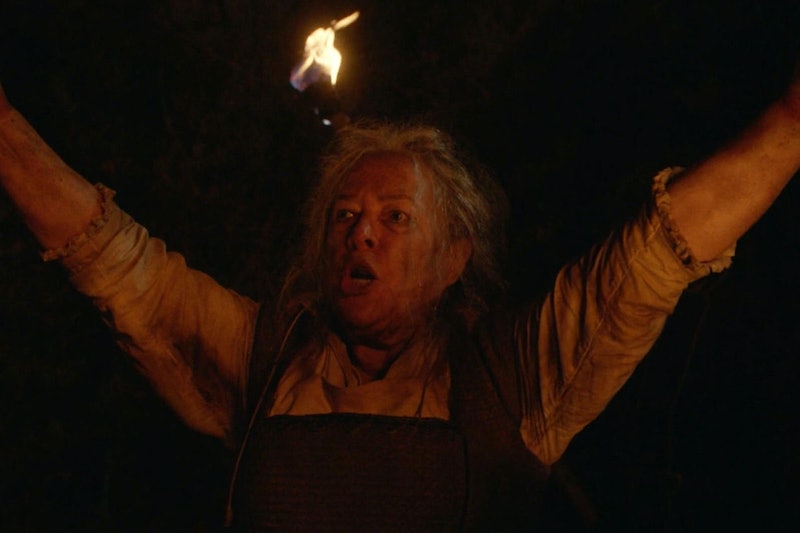 While the land surrounding the Roanoke home from American Horror Story Season 6 will never not be haunted, Lee tried to do her part by burning the house to the ground. Yet, the season finale ended with someone watching the evil house — so who was the person at the end of AHS: Roanoke ? It had to be the Butcher, right? Because there's no way a little fire (or a big fire) is going to stop her from ruling over that land. I mean, death sure hasn't.

The Roanoke colony had been on that property since the late 1500s and Thomasin White — aka the Butcher — had been in power over the colonists for all those centuries. Although the true ruler of the Butcher is actually the witch in the woods, who had saved Thomasin from death those many years ago, the Butcher was the most active spirit stopping the land from being occupied by the living. The bloodthirsty woman has terrorized for over 400 years, so a little house burning isn't going to end her reign.

From the final image of AHS: Roanoke, it also doesn't seem like burning the house will affect the Butcher's powers. Just as Flora was leaving the house after her mom became a ghost herself, the ghost colonists with their torches seemed to be approaching the burning house. The last shot appeared to be the Butcher herself. And while she has no need for the house, and might actually be thankful that it's gone so people stop coming to live there, she's not going to be pleased with Lee's appearance.

Although Lee had once worked with the Butcher before, her purpose now is to protect Priscilla and keep her promise to her daughter. So it's bound to be a long afterlife of fighting with the villainous Butcher for Lee, as long as her soul wasn't completely sold to the witch like the Butcher's. And because the AHS seasons keep becoming more and more connected, maybe this won't be the last we see of the Butcher's feud with Lee. Although neither of them can leave that land, the lasting image of the Butcher looking at the burning house makes me think she could appear in a future season. But, just remember, if she ever does return to AHS, she won't be played by Kathy Bates — or Jessica Lange for that matter — but she'll still be as evil as ever.

More like this
Michael & Kathleen Peterson’s House From ‘The Staircase’ Has New Owners
By Kadin Burnett and Kayla Blanton
'Who Killed Sara?' Won’t Return For Season 4
By Brad Witter
There's Plenty Of Drama Brewing To Warrant A 'Summer House' Season 7
By Brad Witter
Everything To Know About The Possibility Of 'The Essex Serpent' Season 2
By Rachel Mantock
Get Even More From Bustle — Sign Up For The Newsletter