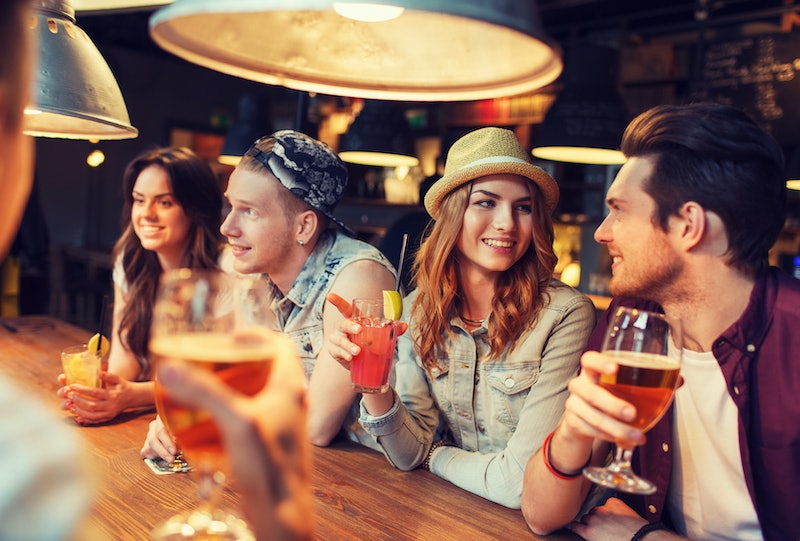 As much as I love Thanksgiving, going back to the town where I grew up isn’t something to love. There’s nothing wrong with that adorable New Hampshire town, but the fear of running into someone from high school, most notably an ex, is real. So real that I actually stay inside and when friends from high school suggest getting a drink at one of the two bars in town, I pretend I’m really busy… which I am, because lying on the couch with my dog is hard work. But running into an ex over Thanksgiving is inevitable for many people going home for the holidays this year.

Match's 2016 Singles in America survey found is that about half of singles have two or fewer exes, while 17 percent have five or more exes. While those numbers of exes aren't huge, there’s still a good chance at least one of them will be from high school — if not, there’s always that crush that still makes you blush and walk into walls, or maybe that’s just me.

Unless you remain relationship-free your entire life, you’re going to collect some exes along the way. Since that’s the case, here are 11 stats about exes, according to Match’s Singles in America survey.

1. Most Singles Believe You Get The Ex Label If You’ve Dated Over Three Months

Although we’re living in a texting world, there are singles out there who still like to drunk dial an ex. According to the findings that percentage is 16, with roughly half of those doing it two times or less. But something tells me if Match were to look into drunk texting an ex, that percentage might be higher. At least by a bit.

3. Austin Has The Highest Number Of Exes

Well, if you’re looking to be someone’s ex or want another ex to add to your collection, then you might want to consider Austin, where fish tacos are completely out of this world, in case you needed a food-related incentive. In Austin, the average number of exes people have is 7.428. The state with the highest number of exes is Kansas with 7.953.

4. Women Are More Prone To Creeping On An Ex’s Social Media

When it came to checking up on an ex via social media, 32 percent of women admitted to it, compared to only 20 percent of men. Of those who did go looking for info, the average number of times they did so — and excuse me while I laugh — was 16. Only 16?! Maybe 16 times a day… not 16 total! Come on, people! Even I can admit to doing it at least a dozen times a day when I’m in extra nosey mood. Hashtag “no regrets.”

5. Both Men And Women Have Dreamed About Sex With An Ex

While a third of both men and women have dreamed about having sex with an ex, men do it more often. According to the stats, the average number of sex dreams men have about an ex is 15, whereas for women it’s eight.

6. Exes Are The Stuff Of Nightmares For 20 Percent Of Women

7. Men Fantasize About An Ex More Than Women

When it comes to fantasizing about an ex, men and women were equal at 30 percent of them admitting to it. But as for how often, men beat out women at 21 times. Women managed to keep those fantasies at 16.

Of those surveyed, 25 percent said they had hooked up with an ex at one point or another. Men, however, at eight times, did it more than women, who reported doing it only six times.

9. More Men Than Women Would Date An Ex’s Friend

For 50 percent of men, dating an ex’s friend isn’t a big deal and they’d do it, while only 25 percent of women would date someone who’s friends with their ex. As for who would be more upset about such a situation, half of women reported that they’d be less than thrilled, while a third of men felt the same.

10. Men Have An Easier Time Being Friends After The Fact

Although whether or not you can be friends with an ex has a lot to do with how the relationship ended, 50 percent of men said they could do it. Women, on the other hand, at only 42 percent, were able to pull off such a feat.

11. How Many Exes You Have Plays A Role In Orgasms

So, while you may be avoiding your ex like the plague over the Thanksgiving holiday, it’s nice to know that they’re not totally a waste. If the more exes you have can get you closer to elusive multiple orgasms, then I say we all need more relationships in our life stat.

More like this
The “Rules For Dating” TikTok Trend, Explained
By Lexi Inks
15 Flirty "Thinking Of You" Texts That’ll Make Your Crush’s Day
By Lexi Inks
What Even Is A Healthy Relationship?
By Brittany Leitner
16 Ways To Jazz Up Your Tinder Bio This Year
By Lexi Inks
Get Even More From Bustle — Sign Up For The Newsletter