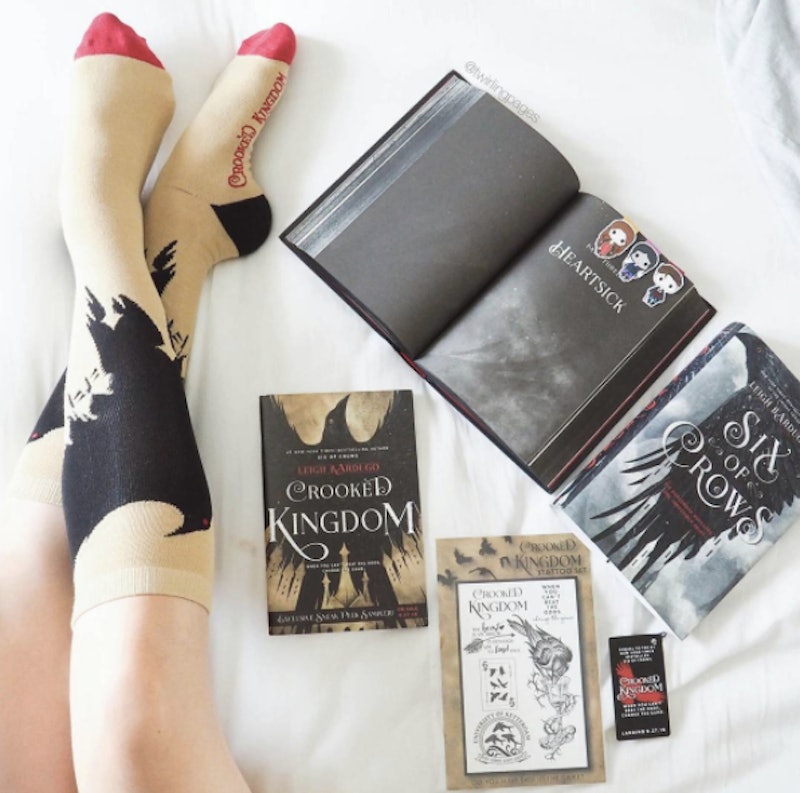 The last year has not been a comforting time for sexual violence and assault survivors. Between the rape culture intertwined into this election season to the Stanford Brock Turner case to the Bill Cosby case, it’s been exhausting. Everywhere we turn, sexual violence survivors are wondering: Am I safe here? Will I encounter rape culture and violence today? Will I be believed and respected? Will an everyday discussion about the news or politics trigger a panic attack?

Like many, books are my safe haven of choice. When I’m reeling from rape and assault cases in the news and the rape culture that’s woven into our society, I dive into the comfort of books. Sometimes I choose books purposefully to feel empowered, and other times, books—and their characters—choose me. That’s exactly what happened with Inej Ghafa in Leigh Bardugo’s bestselling YA Six of Crows series.

When I’m reeling from rape and assault cases in the news and the rape culture that’s woven into our society, I dive into the comfort of books.

“Climb, Inej,” is Inej’s inner mantra in the first of the two books. It gets her through a dangerous situation and reminds her what she has to fight for. Inej is many things—an acrobat, a spy, a skilled fighter, a strong moral compass, a kind and forgiving heart in a dark world, and a sexual violence survivor.

When she was fourteen, Inej was captured and sold into sex trafficking in the fictional city of Ketterdam. Upon meeting Kaz, a ruthless criminal prodigy, she proved her skills as a spy, and Kaz’s gang bought out her trafficking contract.

Inej captured my heart immediately. I’m a sexual violence survivor, and it’s rare that I find myself in a character. Most of the time, sexual violence is played out as a plot device. It’s shocking. It exists to spur change in a woman’s life, to destroy her, to traumatize her and the audience. Encountering this kind of sexual violence plot can be disheartening, even traumatic for survivors. It’s rare to find a character whose experience with sexual trauma is nuanced and complicated, whose entire story is not about the trauma she survived but whose trauma is also not easily erased moments after it happens.

What strikes me about Inej is that she’s allowed to be a whole person. Surviving any kind of sexual violence is complicated. Sometimes I feel as though I can’t escape being a rape survivor. I’ll break out into a panic if someone touches my neck roughly or makes a vicious rape joke, or I’ll wake in the night after bouts of nightmares. Like Inej, sometimes passing faces in a crowd will remind me of my rapist and I have to remind myself that it’s just a stranger, someone who hasn’t hurt me.

It’s rare to find a character whose experience with sexual trauma is nuanced and complicated, whose entire story is not about the trauma she survived but whose trauma is also not easily erased moments after it happens.

Inej’s apparent PTSD and survival instincts are woven into her narrative. They’re a part of her, and they aren’t conveniently erased in her relationship with Kaz—instead, the fact that both Inej and Kaz are trauma survivors is treated with importance in the book, and their possible PTSD is never brushed aside in favor of romantic moments. But these parts of Inej also aren’t all she is, because as survivors, we’re more than just what happened to us, and our relationship with our trauma is complex.

Inej also channels her survival into a mission to own a ship and stop people who are capturing girls like her, and she manifests it into a strong sense of morality and spirituality. She often calls upon memories of the Saints she believes in, and the family she was separated from, and calls on them for strength. While there are days that I’m dealing with the worst of my PTSD, there are also many days that I use what happened to me as a catalyst to fight rape culture, to spread awareness and speak up about consent. I’ve used my experiences as a platform so that other survivors know they aren’t alone, and so we can put an end to rape culture.

While there are days that I’m dealing with the worst of my PTSD, there are also many days that I use what happened to me as a catalyst to fight rape culture...

What’s so important about Inej is that, as survivors, we’re constantly toeing the line of what kind of survivor we want to be. Do we want to be the survivor who really survived, the one who thrives, the one who turns what happened to them into a force for positive change? Do we want to be the survivor who hasn’t really made it past the violence we experienced, who is still afraid, who can’t seem to stop having nightmares? Inej shows us that the two can co-exist, that being a survivor is about being a whole person, and that we are allowed to be at once changed by our trauma but also to exist outside of it.