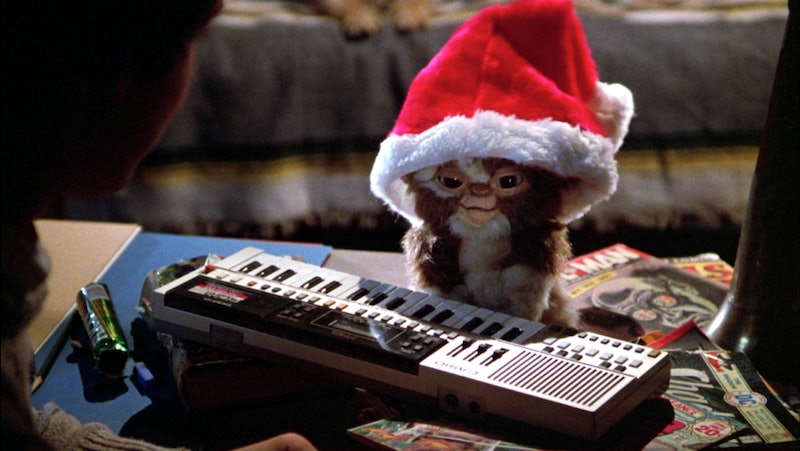 There's an unspoken rule about holiday movies: they have to be happy. Imagine, for a moment, what kind of world we'd be living in if films like A Christmas Story, or National Lampoon's Christmas Vacation, or even the more recently classicized, Elf were not in the queue for holiday movie marathons. A sad, sad one. But, outside of the films that are pure, unadulterated laughs and joy, there are many holiday movies that scared us as kids. Movies that left deep, psychological wounds in our holiday hearts. Especially if we watched them as children. So, I'm bringing you back into the mindset of watching these holiday classics as a child, and getting subsequently freaked out by various aspects of them.

No longer can you hide from It's A Wonderful Life when it airs back-to-back-to-back on all the available channels during December. You must face your fears. That's how exposure therapy works, right? If not, worse case scenario, we hide all winter long because our emotional scars have been resurfaced and now we can't move or eat peppermint bark without fear that a Gremlin will be lurking around the stockings. Waiting for us. Watching us.

Anyway, there's no way of knowing which way it will go. So, strap in for a fun walk down memory lane with these holiday movies that scarred you as a kid. Ho-ho... oh, the horror.

Honestly, what the hell is Gremlins? Not a fun, family Christmas movie, that's for sure. It's about tiny little creature beasts being deplorable and evil around the holidays. It will definitely make you think twice about which troll-like animals you trust. (Which shouldn't be that many in the first place.)

It's unclear why no one ever wants to talk about the many terrifying aspects of Home Alone. First of all, how scary would it be to have Buzz McCallister as your big brother? Secondly, how afraid would you be if your family straight up forgot you existed? Lastly, what if, after all of that, you were robbed?

The scariest part about Home Alone 2 is that Kevin can't catch a break. He encounters dangerous robbers again, after his family forgets about him again, proving that the world is an unfair place that will hurt you. (Also terror-inducing points for our president-elect's cameo.)

Scrooged might be listed as a "comedy," but damn if it isn't dark. Anyone else recall the "Marketing with Terror" commercial? Or the Taxi driver ghost, which not coincidentally gave me a fear of taxis. And ghosts.

All together, A Christmas Carol is a happy story — in that it ends happily. But there are aspects to the narrative that are just downright bone-chilling, mainly because they involve all sorts of ghosts. And life regrets. And sadness.

Scary for the same reasons as the regular Christmas Carol, but with muppets. Ghost muppets. Come on. That would strike terror into any child's feeble heart.

8. It's A Wonderful Life

It’s A Wonderful Life is a classic and beloved holiday movie, but, underneath the surface, it's so scary. The entire third act is pretty much just the protagonist George Bailey showing us what his personal hell looks like — where his brother drowned, his friends are dead, and his wife is going through an emotional breakdown.

No offense, but you probably shouldn't have been watching this as a child. It's definitely violent. And scary. And not really merry. Like, at all. Next.

The idea of the protagonists's father coming back to life is both convenient and sweet, but also frightening. If any of my dead relatives showed up as anthropomorphic snowmen in my youth, I would have run. Far away. Forever. Even if they were Michael Keaton.

The Island of Misfit toys was a bit upsetting as a child. The toys are all irreversibly flawed (a water pistol that shoots jelly?), making their happy "we're all okay!" song feel disingenuous. They're smiling through the pain, and that, right there, is blood-curdling for a child to witness. Plus, the abominable snowman was petrifying, so there's that.

On that note, happy holidays everybody. May your holiday film fears finally be relinquished.