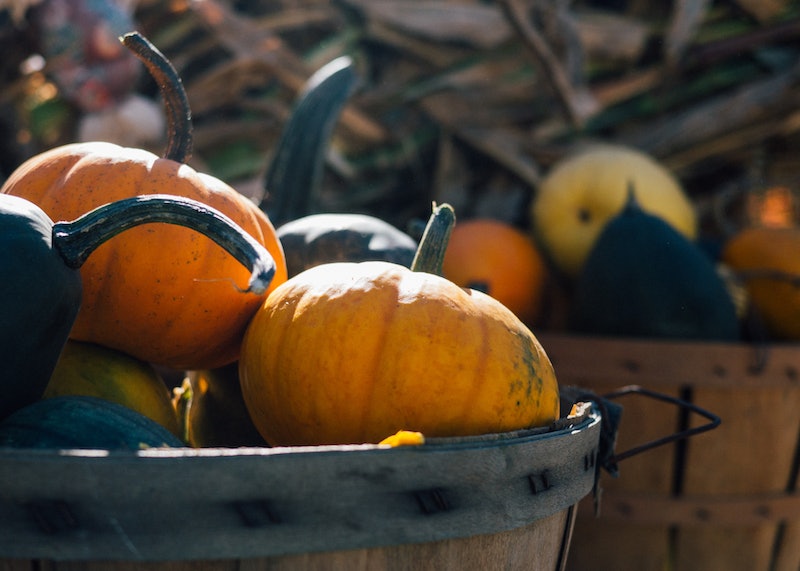 Well, gang, It's been quite a year. With all the bad things that happened in 2016, many might find it extra hard to feel gracious and celebratory as the holiday season approaches. But, there are definitely real things to be thankful for to this Thanksgiving, no matter what. You might not be thankful for the night itself (especially if you have loud and opinionated uncles who don't happen to share anything in common with you) but at least you can be thankful for the plentiful turkey — or, tofurkey, if you choose to abstain from eating meat.

The most important thing to do right now is take a big, deep breath and realize that yes — there still is some good in the world. And no matter what, we're all still quite fortunate in so many ways. Even the idea of sitting down to celebrate your grocery store "harvest" could be a relief from, say, sitting at your desk and trying so hard to focus after hearing that no, the day after Thanksgiving isn't a work-approved holiday.

Still, even when things seem more than dire, you might be reaching for a few more reasons to feel thankful. Yes, it could be worse — it could always be worse — but, thinking about how people around the world face much bigger issues doesn't necessarily perk us up and put us in the holiday spirit.

Here are a few things to give thanks for, if you're really grasping at straws.

1. The Best Holidays Are Yet To Come

Listen, no disrespect to Thanksgiving, but — if you celebrate Christmas, Hanukkah, or Kwanzaa, you know they're a bit more superior. And even better, their history isn't secretly upsetting. Thanksgiving gives us a lot of great food, and a wonderful chance to see a gigantic Kermit balloon in the morning, but it's really just a reminder that it's time to start focusing on the good stuff.

2. We Don't Have Much Longer Until Season 2 Of Stranger Things

If 2016 did anything right, it was bringing us the Netflix series Stranger Things . While a release date has yet to become official for the second season, it's estimated to launch around July 2017. That's not too far. We can hang in there until then. I have faith in all of us.

They do. And know the best place to find them? The internet. You're an adult, so if you wanted to sneak away from the awkward family dinner and check out a few kitten GIFs, you definitely have the right. If you happen to be eating dinner at a place with a few real kittens inside? Consider yourself extremely lucky (and incredibly grateful.)

4. The Gilmore Girls Reboot Is Literally Hours Away

You've been waiting for years, and now it's finally your time to sit back, enjoy, and see whether or not Rory and Jess end up kissing. This is also an excuse to seclude yourself for 90-minute periods of time, which is definitely something to be thankful for. (If your family doesn't understand, just shove an Entertainment Weekly in their face to prove that this reboot is a big deal. There's a 95 percent chance that A Year In The Life will definitely get some coverage.)

It's second place to kittens, but it's definitely on the "things to be thankful for" list. Hopefully your home is stocked up to help you survive the holiday.

6. We're Still In The Midst Of Pumpkin-Smelling Season

Those pumpkin products will likely turn to peppermint soon, so enjoy them while you can. And, I'm not just talking about the infamous Pumpkin Spice Latté from Starbucks — I'm talking about pumpkin cupcakes, pumpkin candles, and pumpkin pie. Pumpkin smells good, and (in non-candle, edible form) tastes great. Give thanks that it exists in our world.

7. Guardians Of The Galaxy 2 Will Be In Our Lives This Summer

You should be thankful that the audience dug the smart and funny action film enough to warrant another movie. Also give thanks that Chris Pratt is in the film, and we'll soon be able to gaze upon him doing cool stuff on an IMAX screen once again.

8. Thanks To Tryptophan, We'll Probably Have The Best Sleep Of The Year On Thanksgiving

Have you found it hard to sleep? Both before and after the election, it was tough to just chill out and settle down. Thanks to our buddy tryptophan — y'know, the amino acid found in turkey that could make you a little drowsy — we may be able to sleep quite well on Thanksgiving night. You also might be getting to sleep earlier, since you don't want to stay up and chat with your somewhat drunk aunt about when you're having children.

9. You Get To Watch Planes, Trains, And Automobiles

Okay, so you can watch it whenever you want — which is something else you ought to be thankful for. But everyone knows it's one of the best Thanksgiving movies around. So, if you save it for a once-a-year viewing, this is your time to let that DVD you bought a decade ago shine.

10. 30 Rock Is Still Streaming On Netflix

There's always a fear that you'll wake up and it'll be missing, but — nope. Still there. (Phew.)

11. Dogs Have No Clue What Happened This Year

While it's a bummer that they don't get the chance to listen to the music of Prince and Bowie the way that we do, they're also sheltered from a bunch of hate in this world. If you spend time with your pup and feed them on a daily basis, they'll love you no matter what. They won't judge you based on past mistakes, or gossip about you behind your back to your coworkers. A basic life and a lot of love is pretty much all they know, and that's pretty fantastic. Let's make sure we're constantly thankful for that (and give our best furry buddy a belly rub to show our appreciation.)

It's important to always be thankful for cookies. The cookie smell, the cookie taste, and the way a really good chocolate chip cookie can change your day around. Cookie season is officially now, so enjoy it while you can. And give thanks to Tollhouse, since they've done so much for us in the past few years.