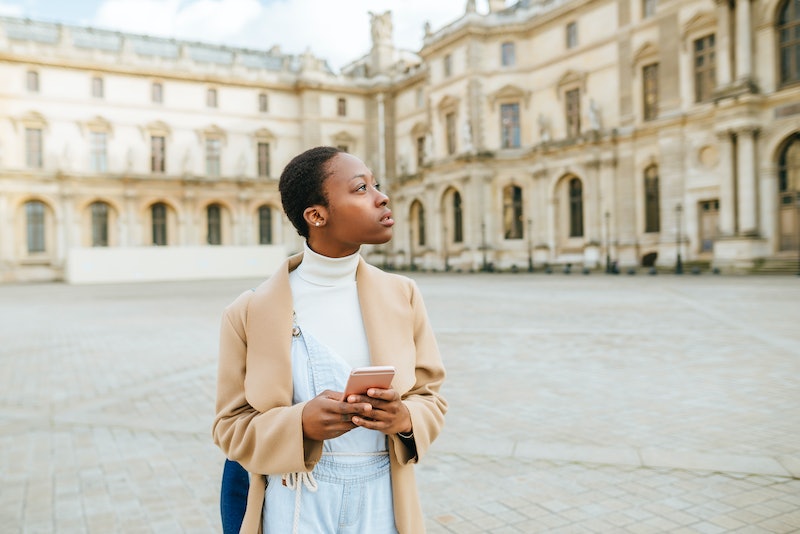 Over the past three months, I've passed through Mexico, Barbados, Germany, the Netherlands, New York, Boston, California, and more. I've gotten on every flight and explored many places by myself — and received some problematic comments along the way. As they piled up, I noticed a pattern: People are uncomfortable with women traveling alone, and they project that discomfort onto us.

If you haven't guessed, I'm addicted to traveling by myself. I love the freedom of being able to do anything I want (as long as it's ethical, obviously) with nobody watching or caring — of being able to say, "I'll never see them again anyway." I love making friends who are totally different from me and who I never would've met were I in a group. All these things make the potential risks and annoyances of solo travel worth it to me.

But not everybody understands that. Some feel that women are putting themselves at risk for traveling alone, should be with their significant others, or owe something to the people they meet because they don't have significant others with them.

"It's Dangerous Out There For A Beautiful Girl Like You."

There are so many problems with this warning. First of all, "out there" is not an actual location. Yes, some places are relatively dangerous, but many are relatively safe. Many women spend four years on college campuses, and those are far less safe places than many cities. The majority of sexual assaults take place at the hands of people we know, not strangers who jump us in alleyways because they've pegged us as unaccompanied foreigners.

And secondly, being "a beautiful girl" has nothing to do with it. All kinds of people, including men, can get mugged or attacked whether they're traveling or at home. And that's because people decide to target them, not because of anything the victim did. Of course, we should all take precautions while traveling, but when given disproportionately to women, this advice is sexist. Oh, and by the way, I'm not a "girl."

"But What Does Your Boyfriend Think Of All This?"

My boyfriend is happy that I'm enjoying life to its fullest. Maybe he's a bit jealous that his job doesn't let him roam the world this much, but other than that, why would I date someone who had a problem with my lifestyle? Nobody who respects women would take issue with their girlfriend not being by their side and under their watch constantly. Forbidding someone from spending time away from you is possessive, and assuming they'd cheat if you're not there is distrustful. And while some people may prefer to date someone they can see more consistently, not every relationship requires that. Cycling between a few months of seeing each other constantly and a few of Skyping and WhatsApping works for us. No need to rain on our parade because you wouldn't want it that way.

"Where Is Your Boyfriend, Anyway?"

This question has exclusively come from men, and after probing them, what they really seem to be saying is either, "If he really loved you, he'd be attending to you 24/7," or, "There's no chance that he'll be able to retaliate against me, so I'm still going to hit on you." (What's more, they often mean both at the same time, since the former claim can be used to support the latter). The first assumption comes from the belief that women are needy and feel neglected if their significant other isn't always by their side — and that two people in a relationship can't be highly independent. The second stems from the view of women as men's property. Unless there's another man in your way, the reasoning goes, it's totally cool to make unwanted advances on a woman. Due to this misogynistic culture, women end up resorting to saying "I have a boyfriend" (a phrase I've memorized in Spanish and Italian), whether they do or not, to get guys to leave them alone. But I've found that even when you do that, they may respond, "But he's not here."

"You Know That Was A Date, Right?"

The desire to get to know new people while traveling is totally normal and understandable, yet some people can't wrap their heads around the possibility of doing this without it being a date, especially if that person is male. One night in Barbados, I went to a club with a guy I'd met on the beach and his friends after discussing with him that I was in a relationship and getting reassurance that he wasn't pursuing anything beyond friendship. Afterward, several guys at my hotel told me I was clueless for not thinking it was a date. One even said, "What's the difference between me and him, that you won't go out with me?" Sure, it was possible (though not at all fair to assume) that the beach guy wanted it to be a date — but the fact of the matter is that I have a say in that, too. If I say it's not a date, it's not a date. Everyone, including women, should be free to have whatever interactions enhance their travels without feeling obliged to anyone.

"You'll Want To Settle Down One Day."

Like the "You'll change your mind" comment that women who don't want kids get, this one assumes that the speaker can predict the future because they know what women want. And it's often tied in with ideas about women's desire for a stable home, a partner, and kids. But that lifestyle is not for everyone. Some want to spend their lives untethered to anyone, and some can make relationships and families work with a nomadic lifestyle. Could I change my mind? Sure. I could change my mind about anything. But we don't normally question people's decisions just because they could change their minds, and we shouldn't treat a woman's decision to travel alone any differently.

More like this
25 Inspiring Quotes From Black Women To Celebrate Black History Month
By Kyli Rodriguez-Cayro and JR Thorpe
24 History-Making Black Women You Probably Didn't Learn About In School
By Ayana Lage and JR Thorpe
23 Super Sweet Things To Write In A Valentine's Day Card
By Karen Belz and Lexi Inks
Here’s What TikTok's "Mascara” Trend Is *Really* About
By El Hunt
Get Even More From Bustle — Sign Up For The Newsletter
From hair trends to relationship advice, our daily newsletter has everything you need to sound like a person who’s on TikTok, even if you aren’t.