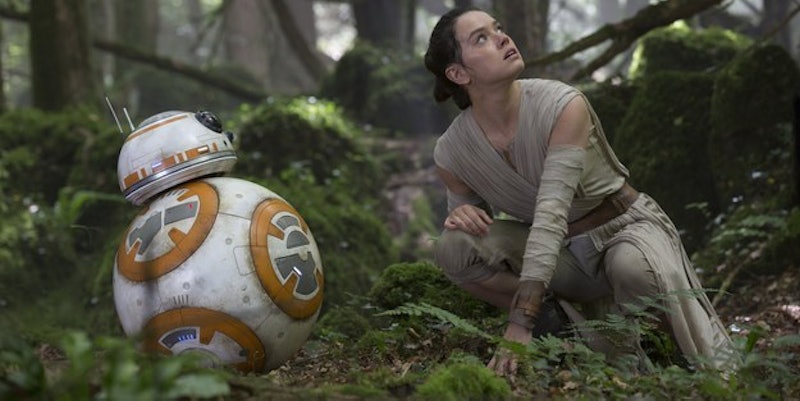 The dust has barely settled from Star Wars: The Force Awakens' record-breaking run at the box office, and yet it's already time for a new Star Wars movie to blast into theaters. Rogue One, the franchise's first-ever anthology film — i.e. a story that takes place outside the series' main chronological arc — premieres on December 16, almost a year to the day that The Force Awakens debuted. But when does the next Star Wars movie come out, after Rogue One? Will it, too, arrive right on schedule next December, or is Disney shifting its strategy?

If you've already become accustomed to Star Wars movies being released in time for the holidays, you're in luck, because the next Star Wars movie is arriving in theaters on December 15, 2017 — once again, almost a year exactly since the release of the franchise's previous film. Unlike Rogue One , the next movie will be part of the series' main story, Episode VIII, and will pick up right where The Force Awakens (AKA Episode VII) left off. But don't get too comfortable with the current Star Wars release schedule, because starting in 2018, changes are coming to a galaxy far, far away.

Beginning in 2018 with the standalone Han Solo anthology film, Star Wars movies will be released in the traditional blockbuster month of May rather than in December. The Han Solo movie will be released on May 25, 2018, and Episode IX will see release on May 24, 2019. After that, the only film scheduled is an as-yet-untitled anthology film, scheduled for release at some point in 2020 — though no date has been declared. And while no other films have been announced yet, Disney has said that they will continue to release a new Star Wars movie every year for as long as there is interest in them, according to Wired.

Now, moving the Star Wars movies to May, while it makes sense on the surface, becomes a little curious if you dig deeper. For the past several years, Marvel movies, which are also owned by Disney, have dominated May and the early summer season at the box office. And that trend is likely to continue in 2018 and 2019, with Avengers: Infinity War premiering on May 4, 2018, and its sequel hitting theaters on May 3, 2019. So it is strange that Disney would move the dates of its Star Wars properties, which face little competition in December, to open just a few weeks after its Marvel properties; possibly cannibalizing its own profits. I would think Disney would want to keep its two biggest franchises six months apart like it does now in order to keep up maximum box office domination throughout the year, but who am I to question the studio? Disney already obliterated the worldwide box office record for 2016 before Rogue One has even arrived, so they probably know what they're doing.

If you're a Star Wars fan, you don't have to worry about the franchise going away anytime soon. There's going to be so much new Star Wars content in the next few years that it will be hard to remember a time when all that existed was the original trilogy.