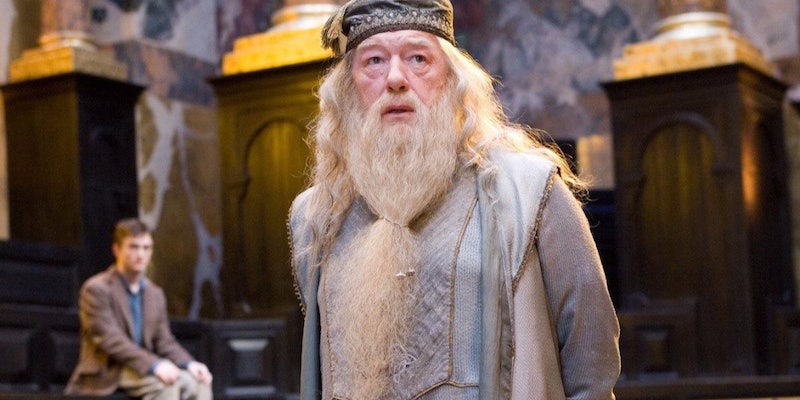 The first installment in J.K. Rowling's Harry Potter prequel movie series, Fantastic Beasts and Where to Find Them, has been a resounding success with critics and audiences alike. If you aren't excited about the four upcoming Fantastic Beasts movies, you should revisit the one detail you missed in Deathly Hallows that might prove Rowling's new series will climax with history's most extraordinary wizarding duel: Albus Dumbledore vs. Gellert Grindelwald.

Please note: while this article does not contain spoilers for Fantastic Beasts and Where to Find Them, some of the links contained herein might ruin the film's key plot points. If you're worried about spoilers — which you totally shouldn't be — click at your own risk.

In Harry Potter and the Deathly Hallows, the Boy Who Lived reads Elphias Doge's poignant obituary of Dumbledore in The Daily Prophet. Doge writes:

They say, still, that no Wizarding duel ever matched that between Dumbledore and Grindelwald in 1945. Those who witnessed it have written of the terror and the awe they felt as they watched these two extraordinary wizards do battle. Dumbledore's triumph, and its consequences for the Wizarding world, are considered a turning point in magical history to match the introduction of the International Statute of Secrecy or the downfall of He-Who-Must-Not-Be-Named.

Fantastic Beasts takes place in 1926. The series will comprise five installments covering 19 years of wizard history, which means that the final movie will take place in 1945: the year Dumbledore defeats Grindelwald, Tom Riddle leaves Hogwarts, and World War II comes to an end. It seems highly unlikely that Rowling would end a new series of films in that year without tying in the greatest wizard duel of all time.

Fantastic Beasts' connection to Voldemort has been the subject of much speculation over the last few months. A prominent theory held that Credence Barebone would turn out to be Tom Riddle, Sr. in disguise, possibly hiding from Merope Gaunt and other magic folk. Although the events of Fantastic Beasts — again, no spoilers — have convinced some that this cannot possibly be the case, but plenty of clues still point to a link between Credence and Voldemort.

That's the prevailing theory, and it's well-supported by the Deathly Hallows text, but the fact is that Rowling has never revealed who killed Ariana. Dumbledore's sister died in the middle of a three-way duel between her brothers and Grindelwald, at which point the three men parted ways.

Ariana is arguably the Harry Potter series' most tragic figure. As a young witch, she was attacked by a group of Muggle boys, and refused to use magic from there on out. Her father got revenge on the boys, but wound up imprisoned in Azkaban for violating the International Statute of Secrecy.

In Deathly Hallows, Aberforth tells Harry that Ariana's suppressed magical ability "turned inward and drove her mad, it exploded out of her when she couldn't control it, and at times she was strange and dangerous." After one such explosion killed their mother, Albus Dumbledore became his sister's guardian.

It's likely that Dumbledore attributed the absence of his parents to what he perceived as an unfair restriction on relations between the Muggle and wizarding communities. Around the time of his mother's death, Albus met Grindelwald, who had recently moved to Godric's Hollow. From Nerdist:

The two realized they had much in common. They spent the next few months plotting how to gather the famed three pieces that made up the Deathly Hallows so that they could lead a worldwide revolution, one that would bring peace, but would also end the International Statute of Secrecy and see a magical government in place that would rule over Muggles.

As well-intentioned as they were, Dumbledore's plans with Grindelwald intruded upon his responsibility to Ariana, whom he intended to take along on their adventures. When Aberforth confronted the two young men about how their plans would impact both his sister and the world, a fight broke out. Grindelwald attacked Aberforth, and Dumbledore rushed to his brother's defense. The outcome would be tragic. Aberforth tells Harry:

"[T]he flashing lights and the bangs set her off, she couldn't stand it ... and I think she wanted to help, but she didn't really know what she was doing, and I don't know which of us did it, it could have been any of us — and she was dead."

Ariana Dumbledore died in 1899, 46 years before her brother would participate in one of the most important duels in wizarding history. Although her death predates the Fantastic Beasts series by nearly 30 years, it's unlikely that the new movies will be able to convey the importance of Dumbledore's final confrontation with Grindelwald without explaining what, exactly, happened on that fateful day. If the fifth Fantastic Beasts movie ends as everyone thinks it will, one of the Harry Potter series' biggest mysteries will have finally been solved.