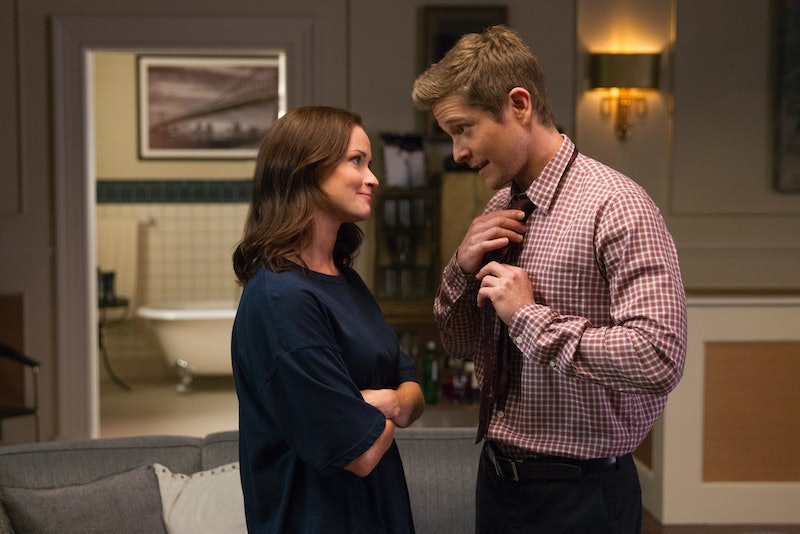 Despite all of the unabashed glee I had returning to the lives of the Gilmore women in the Gilmore Girls revival, there was one thing that kept nagging me the entire time I was watching. Warning: Major spoilers ahead. More than any other plot line, the one focusing on the tangled web of Logan and Rory's relationship — which was a morally ambiguous friends with benefits situation, but also, by all accounts, an affair — left a very bad taste in my mouth. It's not about two consenting adults enjoying one another's company while Rory is in London for a short stay. It's not even about the fact that Rory is pregnant and Logan is most likely the father. No, what bugs me is that Rory is now considered unlikeable, in part because of her relationship with Logan. And she must bear the brunt of the guilt for having the affair when Logan actually deserves a fair amount of the heat, too.

Listen, I have some problems with the way Rory handled the stickier situations in her life in the revival. Could her interview at SandeeSays have gone a bit smoother? Totally. Should she have just broken up with Paul every time he texted her instead of ghosting him? Obviously. But Rory's entrance into this very blurry affair-slash-relationship with Logan is not entirely on her shoulders. Logan's circumstances have shielded him from catching any heat for his actions and I just can't let that slide.

As I mentioned before, these are two consenting adults. Considering their pedigrees, they're also well-educated and rather aware adults. So when Rory regularly references the other women possibly drifting in and out of Logan's life, why did it not dawn on him that maybe this arrangement wasn't functional? When Rory learns about Logan's fiancée, Odette, she uses her as a reason for them to officially separate after a night out with the Life and Death Brigade. In light of that, rather than agreeing or remarking that what they were doing was troublesome, Logan tried to find a reason to convince Rory they should remain involved. I mean, come on.

As a woman, it's not tough to nail down why Logan has stayed out of many Gilmore Girls postmortems. The male privilege Logan enjoys in the revival is evident from the get-go; this privilege is only amplified by the fact that he comes from an extremely well-heeled family and is doing well in his own career in London. It allowed him to drift into Rory's life, enjoy their time in their own little bubble, and let her fly back to Star Hollow without ever really feeling the pain of her absence.

Worst of all, Logan's male privilege protected him from ever being considered a ne'er-do-well, in an equivalent or larger role, or blamed for his actions in the affair with Rory. When Rory finally admits to Lorelai that she's been staying with Logan every time she flies back to London, her mom barely bats an eye. Neither woman discusses Logan's role or whether he is guilty of anything in any capacity. This is outrageous. I totally get that Lorelai and Rory are there to discuss and sort out one another's issues (that is, arguably, the prime function of their relationship), but for them to just gloss of Logan without contemplating whether he might actually be just as morally guilty for having an affair is myopic.

It's not simply a matter of placing blame for the sake of placing blame. Recognizing that, within the Gilmore Girls canon, Logan is simply able to remain engaged to Odette and not have his life or career disrupted in any major way while Rory's entire world is consistently turned upside down — including the now course-altering pregnancy ahead of her — is to acknowledge that Logan has been allowed to unfairly skate by. It's only right to call him out on it, especially if there's going to be a ton of backlash against Rory for having an affair with a man engaged to another woman.

It's time Logan's shine got dulled, even just a little. Even if you believe Logan is endgame for Rory, it must be understood that he's actually a pretty terrible guy for continuing to sleep with Rory while he's engaged and only act concerned for her when he's at a distance. That's not the kind of behavior Rory's future boyfriend, partner, or husband should employ and a true Gilmore Girls fan recognizes that.