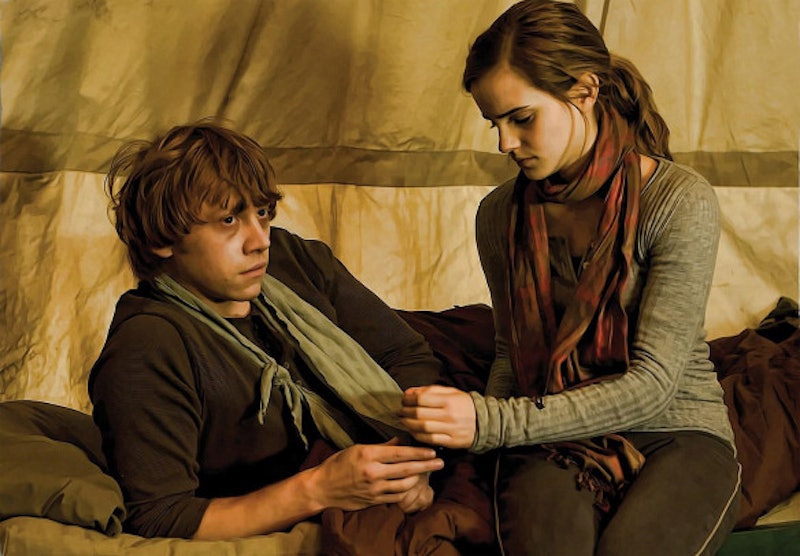 As a child of the '90s, I learned a lot from Harry Potter 's Hermione Granger that I will forever hold close to my heart. From her, I learned to be unapologetic about my knowledge and confident in my opinions. I learned the moral responsibility to speak up for people who don't have a voice of their own. I learned to be brave, to be relentless, to be fierce, and to value my relationships with people for the precious things that they are. And, had I not been careful, I also would have learned something quite dangerous from her: to settle for someone who recognized these desires in me, and actively used them to tear me down.

I'll take you back a bit here into my time machine of dorkery. I was 11 years old when I wrote my first fanfiction, which was, of course, as #basic as fanfiction gets. It was about the daughter of Harry Potter, set sometime in the distant future of a series that was at the time still years away from ending. I'm sure the story itself was unremarkable (sorry, young Emma), but the framework was not. In my version, Harry married Luna and Hermione married Neville. Even in my 11-year-old brain, before I had any concept of romantic relationships, I could not see Ron Weasley in a healthy relationship with someone, least of all the heroine I so deeply identified with all through my adolescence. He was left completely out of my narrative.

We all know now, of course, how the actual story ends. Ron and Hermione are a couple by the end of the books, and have their own Weasley-Granger brood in the epilogue. As a kid, I was vaguely disappointed, without knowing exactly how to put it into words — but as an adult, looking back at all the circumstances in their courtship, I'm stunned.

Just in case it escaped your notice, Ron Weasley spends the majority of his time with Hermione being unkind to her. From the moment he first meets her, he has her in tears after insulting her for trying to help him. He constantly mocks her passion for school. He accuses her of lying about having a date to the Yule Ball, implies she couldn't possibly be worthy of a date, and then ruins the night for her with his temper. He doesn't speak to her for weeks after learning she kissed Viktor Krum months prior, until again, Hermione was in tears. He rage-dated (and used) another girl to make Hermione mad. In his worst moments under the influence of a Horcrux, he didn't just lash out, but directly accused Hermione of choosing another man over him. Throughout their years at school, he intermittently cold-shouldered her and projected anger on her that she did not deserve.

It may be easier to excuse some of Ron's behavior because he was younger then, and in the books, we're somewhat distracted from it because of the clear moments of sweetness we see between them as well. But when you consider that most of these moments were borne of Ron apologizing for something he'd done, I worry about our ability to jump on board with the "He's mean to you because he likes you!" trope that is already so damaging to women. Because that is exactly how Ron Weasley skirted a lot of scrutiny he no doubt deserves.

Then came 2014, when J.K. Rowling threw a curve ball. She said in an interview with Wonderland that she regretted that Ron and Hermione ended up together. She called it "wish fulfillment" and acknowledged, "For reasons that have very little to do with literature and far more to do with me clinging to the plot as I first imagined it, Hermione ended up with Ron." Even Rupert Grint chimed in later and said that he thought Ron and Hermione would get divorced.

Enter Harry Potter and the Cursed Child, the "eighth Harry Potter story," and ostensibly Rowling's chance to correct this regret of hers. I was hoping at best for a divorce subplot wherein Ron and Hermione amicably settle their differences and end up happy without each other, or at the very least get some indication that Ron has changed for the better. But we are instead introduced to a Ron who not only hasn't changed, but apparently gets drunk on the regular, including during his own wedding. A Ron who resents his wife's career success. A Ron who gives teenagers love potions and makes suggestive comments about a young woman who is most certainly not his wife. A Ron as uncompromising and quick to anger as he was in school, if not more so.

And here's the bottom line: If you identify with Hermione, regardless of your gender or orientation or background, then you have met many Ron Weasleys in your life. It is an archetype that repeats itself so often in fiction because it speaks to a much larger truth in toxic relationships in which one partner is significantly less secure than the other. The Hermione in these situations is made to feel that they have to apologize for the way that they are, to suppress or compromise themselves so their Ron feels safe. More than that, they feel it's their obligation to "fix" their Ron, as we saw with Hermione time and time and time again — which is harmful to them both.

But it isn't just the familiar and disappointing relationship dynamic between Ron and Hermione that is cause for worry. By presenting a character we admire in a situation like this, it makes it more acceptable in the mainstream and in our own lives. I'm personally a huge sucker for the "hate to love" trope, but mutual respect in that is key — they may fight, but they fight fairly, and they never actually aim to hurt. But Ron deliberately hurts Hermione throughout the entire series. He instinctively devalues her attractiveness, intelligence, or drive in moments of insecurity. Sure, he's supportive of her some of the time, but that's just it — being supportive some of the time doesn't justify that kind of behavior.

And allowing for this kind of behavior — the "he's mean to you because he likes you" cliche that I mentioned earlier — isn't just harmful for its own sake, but also for serving as a gateway for further abusive behavior. To be clear, by no means am I accusing Ron Weasley of being an abusive character, nor do I think he ever could be. But it is a culture that does not stop men like Ron Weasley from being emotionally or verbally abusive, even "harmlessly" as young boys, that leads to the normalization of all types of abuse in adulthood. It allows for abusive partners to justify their behavior, and makes the partners who are abused believe that those actions, however awful, are coming from a place of "love." The escalation may sound extreme, but it is all the more necessary to make, because for some people, it is a reality.

Yes, Ron Weasley and Hermione Granger are fictional characters. But the Harry Potter characters have more power over their generation than possibly any other fictional work that has come before them. For millions of us, they shaped our worldviews, our opinions, our sense of right versus wrong. And watching our young feminist hero of the '90s blossom into a woman who ended up settling for someone who emotionally tore her down countless times is more than disappointing — it's dangerous. It unconsciously tells all those kids who identified with Hermione growing up to settle for their Ron, when they are deserving of mutually supportive, healthy, fulfilling relationships with a partner who loves them unselfishly. I stand by what J.K. Rowling said about regretting Ron and Hermione's relationship in 2014, and ever since the release of Cursed Child, I've wished she had stood by it, too. Hermione Granger deserved better, and so do we.

More like this
'Bridgerton' Star Nicola Coughlan Confirms Season 3 Will Focus On Colin & Penelope
By Grace Wehniainen and Alyssa Lapid
Candice Carty-Williams’ 'People Person' Tackles Daddy Issues With Warmth
By Sam Rogers
The Trailer For The 'Game Of Thrones' Prequel 'House Of The Dragon' Is Dark AF
By Grace Wehniainen
10 Must-Read New Books Out This Week
By K.W. Colyard
Get Even More From Bustle — Sign Up For The Newsletter