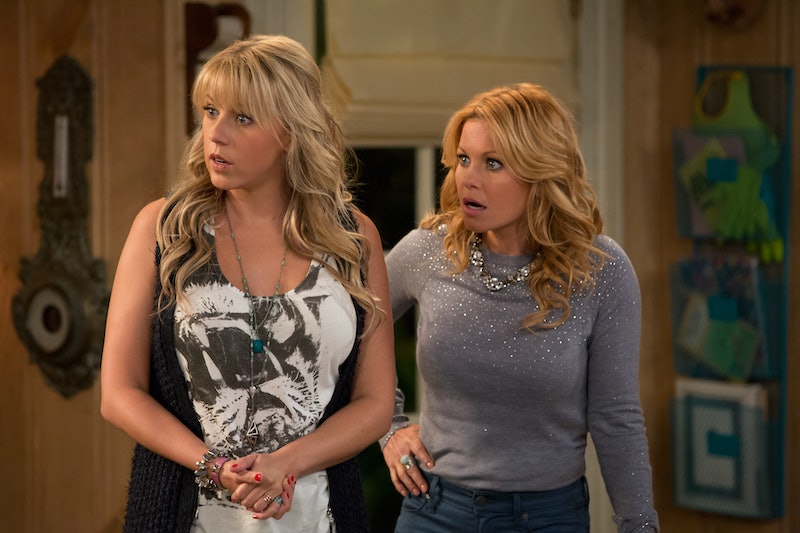 While Fuller House did not need to add any special guest stars to make its first season exciting for fans of the original series, they were a bonus feature of the Netflix series. Now with the next season premiering on Dec. 9, the guest stars for Fuller House Season 2 are just as exciting, if not more so, than the ones in Season 1. Along with pretty much every major character from the original Full House cast returning (ahem, Olsen twins), the first season had guest stars like singer Macy Gray and baseball player Hunter Pence. So who stopped by the iconic Fuller-Tanner-Gibbler house for Season 2?

Candace Cameron Bure, Jodie Sweetin, and Andrea Barber still lead the show and Bob Saget, John Stamos, Dave Coulier, and Lori Loughlin all make a comeback in Season 2 — because, really, how could they not? Season 2 also has majorly exciting original Full House characters who weren't in Season 1 and even introduces some new characters, like Kimmy's brother (she has one?!) Jimmy. And no, Mary-Kate and Ashley Olsen really aren't ever coming back, so get over it.

Yet, unexpected and random cameos make me gleeful. So whether they are celebs who are best known for being famous back when the original Full House was on TV or are famous now, here's a list of every guest star in Fuller House Season 2.

Danny Tanner has competition because another family sitcom patriarch is visiting Fuller House. Alan Thicke from Growing Pains (which also starred Cameron Bure's brother Kirk Cameron) tweeted about his Season 2 appearance back in June. He plays someone that D.J. gets set up with by a friend who is trying a little too hard to help D.J. not be single anymore.

After Maks and Val Chmerkovskiy showed up in Season 1, I guess it makes sense that the Dancing with the Stars judge is hanging out with the Tanners too. (Plus, Cameron Bure and Sweetin are now both DWTS alums.) In the show, he plays a fancy dance coach for Ramona.

Marla Sokoloff isn't technically a guest star since she is reprising her original Full House character Gia for Season 2, but a Girl Talk reunion calls for a celebration!

This Broadway star who dabbles in TV is also more than a guest star as she plays a character in Fuller House Season 2 — and a pretty essential one at that since Laura Bell Bundy is Ginger Gladstone. That's right, the actress who originated Elle Woods in Legally Blonde on Broadway is Joey's wife.

Considering the very first episode of Fuller House featured D.J., Stephanie, and Kimmy dancing to New Kids on the Block's "You Got It (The Right Stuff)" and the boy band was referenced in the original series, their cameo is pretty much the most perfect guest star appearance.

Viper, Nelson, Duane, and Kathy Santoni all appeared in the high school reunion episode. Viper and Duane were reprised by the original actors, but Nelson and Kathy were recast.

For only having 13 episodes, Fuller House really packed a punch in the guest star department.

More like this
The 'Hocus Pocus' Sequel Finally Has A Release Date & It Makes Total Sense
By Shannon Barbour and Radhika Menon
Alicia Silverstone Has Recreated An Iconic 'Clueless' Scene
By Frances Stewart
“The Door Is Always Open” For Another 'Breaking Bad' Spin-Off, Says AMC Boss
By El Hunt
Everything You Need To Remember Before Westworld Season 4
By Brad Witter
Get Even More From Bustle — Sign Up For The Newsletter