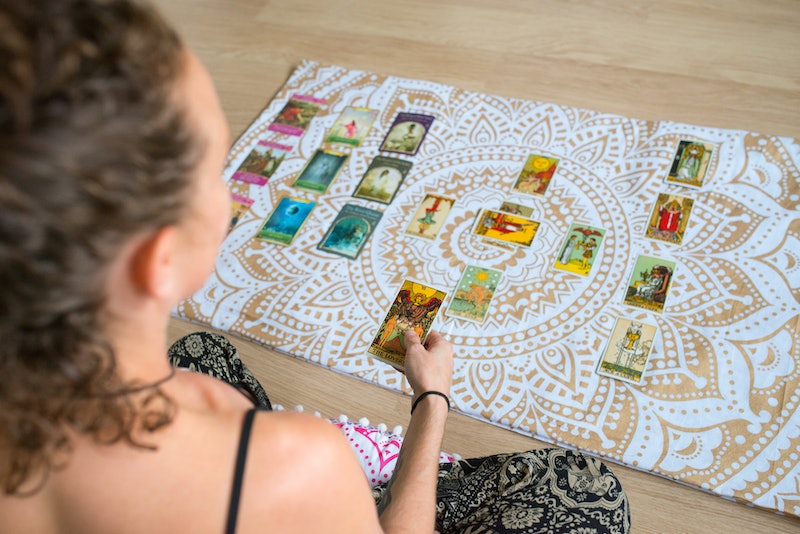 Every now and then, I have a gut feeling something is going to happen — and then it does. Of course, there's only one logical response: I must be psychic. (Right?) But because I don't like to jump the gun, I took a bunch of online psychic tests to help me better determine if I am indeed gifted. Regardless of my abilities to... uh... know the unknown and see the unseen, these quizzes are obviously just for fun and shouldn't be taken too seriously. If you happen to believe in psychic abilities and think you might have them, I believe the most convincing way you can know for sure is to experience them firsthand.

Sure, there are other clues that your senses may be hyper-sensitive. Maybe you see things in your dreams that mean something deeper. Maybe you're able to bring yourself into a state of meditation and see things more clearly than ever. Maybe you have the ability to pick up on people's energies and know things about them that they don't even know about themselves. But I can tell you one thing for sure: There's one way you definitely cannot determine you're psychic, and it's these quizzes I'm about to show you.

This test allows you to choose between predicting the future and predicting a card not yet revealed to you. I figured the card was a slightly more realistic option, so I went with that. I chose to take 10 guesses, and guessed the correct card four times. My results? "Selecting 40 percent correctly is indicative of an extraordinary amount of psychic ability to see the unknown (clairvoyance)." You guys, OMG.

Next, I did a test where I had to guess a number between zero and nine. The more times you guess, the more accurate of a reading you'll get. Again, I took 10 guesses; but this time, I only got one right. I then became irrationally angry and refused to go on.

The James Van Praagh psychic test is a series of questions about you, your life, personality, etc., that supposedly determine your specific psychic gift. Each question has four possible answers to choose from. My results revealed that I'm "clairsentient," also known as an empath. My gut rarely fails me, and I have the ability to "feel" information in other people. While I wouldn't go so far as to call myself clairsentient, I do believe I'm a very empathetic person. So this test was kind of cool to me.

The Psychic IQ Test asks 12 "what would you do if..." types of questions. Out of a possible score of 36, I scored a 21, which they characterized as, "Not bad. You're probably quite psychic." The best part, however, is people who scored between 12 and 20. Of this, the Psychic IQ Test says, "You've a long way to go. You're as psychic as a rice pudding." Rice pudding? The nerve.

ProProfs Are You A Psychic?

I'm a psychic! I'm a medium! I'm intuitive! Except, there's a typo on this website; they spelled "intuitive" as "intutive." There were 20 questions with two answers to choose from: One which was obviously the "psychic" answer, and the other its total opposite. Enough said.

This was similar to the first test I did with guessing the not-yet-revealed card; in this case, though, the card hadn't even been picked yet. I had to use my really special gift to determine what card they were going to pick — before they even picked it! I scored four out of 25 cards correct, or 16 percent, which they said was "not indicative of psychic ability to see the future."

Guess the next color to be chosen and you might just be psychic. I scored 19 points. According to this site: "Either your psychic abilities are weak today, or, you just are not trying." Ouch, guys.

The last psychic test I took involved cards again; this time, though, the cards had pictures of different women, and I had to pick whichever I was most "drawn" to (meaning that would be the correct card). Unfortunately, I only scored two out of 10, and the test told me that "something powerful" is working against me. Rough day.

Do these tests work? Probably not. They are, however, a fun way to pass the time — even if they're unlikely to reveal any latent talents you might have. Ah well; you win some, you lose some, right?

More like this
Your Guide To Earth Signs
By Nina Kahn
Eleven From ‘Stranger Things’ Is A Cancer Zodiac Sign, An Astrologer Says
By Brittany Beringer
Here’s Your Fourth Of July Weekend Horoscope
By Mecca Woods
4 Zodiac Signs That'll Have The Luckiest July
By Brittany Beringer
Get Even More From Bustle — Sign Up For The Newsletter