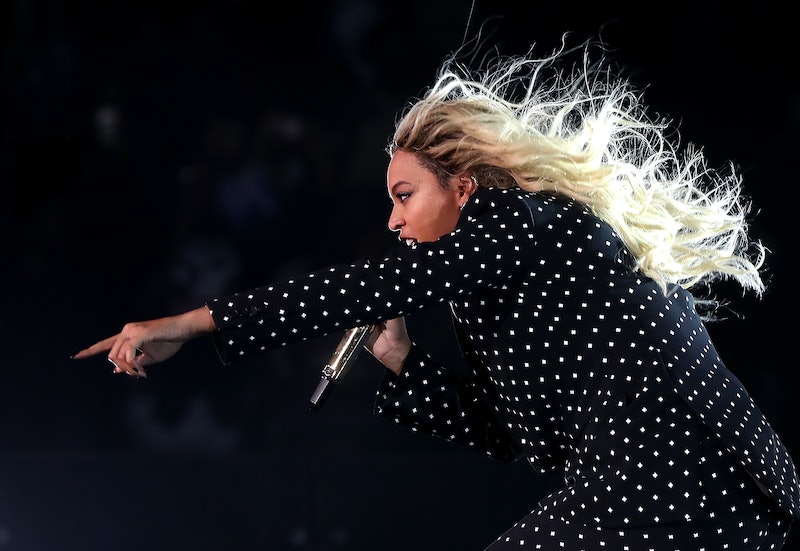 Donald Trump is now TIME'S Person of the Year for 2016, and nobody's shocked. Even before he became president-elect, Trump dominated the election cycle and turned the nation's political climate upside down — although whether that's a good thing or a bad thing depends on who you talk to. Had any of the women on TIME 's Person Of The Year shortlist won, however, it's likely that they would've been chosen for very, very different reasons.

This year, there were five other contenders on TIME'S short list who could have won the title, including two women: Hillary Clinton and Beyonce. The other runners-up include Turkey's president Recep Tayyip Erdogan, hackers, and the CRISPR pioneers. Even though hackers is a male-dominated field, there are obviously women hackers out there; additionally, both men and women were involved with inventing CRISPR technology. Technically, this means you could say there are more than two women on the short list. But if we're talking about women as individuals, the number is limited to two.

Clinton and Beyonce both earned well-deserved spots on the short list. Clinton is not only the first woman to be a U.S. presidential candidate for a major political party, but she's also a twice-elected U.S. senator, as well as former First Lady and former Secretary of State. She's dedicated her entire life to public service through law and policy making, working her way from the bottom up. Similarly, Beyonce has made history in more ways than one: She's the first woman to have five albums hit the No. 1 spot on the Billboard 200 chart, she's won countless awards for her legacy, and her revolutionary music has empowered thousands of black men and women to feel proud of who they are. This year's Lemonade was particularly monumental for a huge number of reasons.

If Clinton or Beyonce had become TIME Person of the Year for 2016, it would have been because they've broken more glass ceilings than most have in a single lifetime, and because they give hope to so many others who believe in the power of inclusion and equal opportunity for all. On the other hand... well, you can say a lot of things about Donald Trump, but "breaking glass ceilings" isn't one of them.

Trump's words and behavior during the presidential election were — to put it mildly — controversial. He's been recorded countless times during debates, speeches, and public events making hateful remarks against marginalized people, including women, people of color, immigrants, and people with disabilities. Trump is also about to become the first U.S. president with zero government experience. Many Trump supporters believe this to be a positive attribute, viewing him as an outsider who has the guts to "shake up Washington"; however, many other people are concerned about both Trump's lack of government experience and that of much of his cabinet.

The thing is, a president-elect isn't just the nation's Commander-in-Chief (although that in itself is an extensive role), but also a leading example for the people he's supposed to represent. Trump's win has emboldened some to believe that bigotry, racism, sexism, ableism, and xenophobia are acceptable. Some pro-Trump rally-goers have been reported saying offensive remarks about women, undocumented immigrants, and others, just like their chosen candidate. Even the Loyal White Knights, the largest Ku Klux Klan group that still exists in America, hosted a parade in Roxboro, North Carolina on Dec. 3 to celebrate Trump's victory.

From his abrasive behavior to his lack of a political past, Trump has set so many precedents that are unheard of — precisely the reasons why TIME named Trump 2016's Person of the Year. Clinton and Beyonce did, too, of course. But if you think about it, while Trump's legacy did win him the title of Person of the Year, it may not exactly be something to be proud of — which is what sets the women on the short list apart from him: In their cases, it absolutely would have been a positive moment. For Trump, though? It's ambiguous at best.

And whether or not the Trump camp will realize that remains to be seen.

More like this
5 Ways To Stand In Solidarity With Women In America From The UK
By Sophie McEvoy
How To Fight For Reproductive Rights, Based On How Much Time You Have
By Courtney Young
YouTuber Runs Into Margaret Sanger’s Grandson While Filming
By Alexis Morillo
How Getting An Abortion Has Changed From The ’60s Through Today
By Amanda Chatel
Get Even More From Bustle — Sign Up For The Newsletter