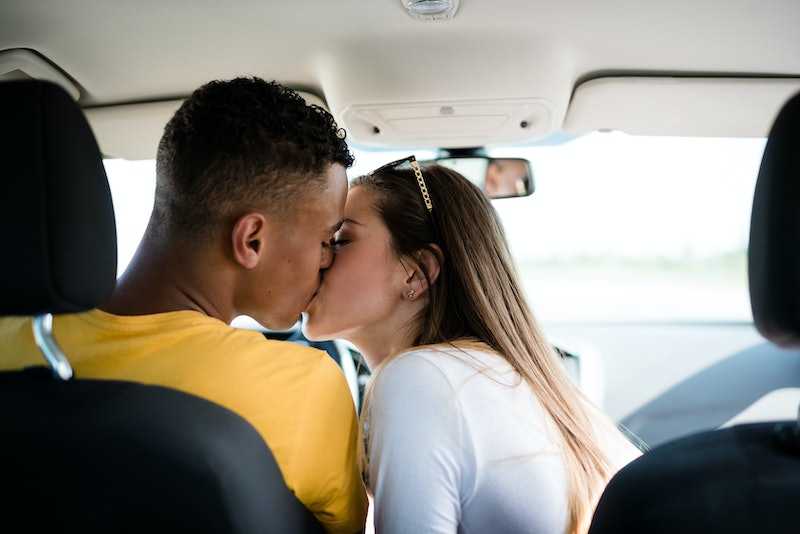 For those of you who have been fantasizing about getting it on in the back of an Uber, it's time to put that dream to bed. In a list of “rules,” that were released on Thursday, Uber has banned sex and flirting in its fleet of cars. I mean, who doesn’t want to be mid-orgasm while being gawked at in the rearview mirror by a total stranger?

According to the guidelines that were published:

Don't touch or flirt with other people in the car. As a reminder, Uber has a no sex rule.That’s no sexual conduct between drivers and riders, no matter what.

However, it should be noted that as for what constitutes flirting, isn’t specified. Nor does it explain this “no touching,” rule, which immediately makes me think of Arrested Development. I want to believe that holding your partner’s hand is a-OK by Uber, but they didn’t get into details, so maybe not.

But for those of you who've had your dreams of banging in the back of an Uber crushed by this news, here’s something to consider: There are other places in the world, public places, too, where you can have sex and you won’t have to worry about losing your Uber account. Here are seven of them.

If it’s the thrill of having sex in a moving car with someone else driving that you’re looking for, then there’s no place quite like a cab; at night, speeding down a busy city street. While sex in public is always a risk (you could go to jail!), based on what I learned from watching HBO’s Taxicab Confessions as a kid, some drivers will turn a blind eye to what’s going on the back of their cab. As for those who don’t, well, that’s just a risk you take.

Try this position in the cab: In a chair. (Since you're sitting anyway, this position allows you to be very discrete, as long as you do it at night.)

2. Tuesday: In Your Own Car

If by Tuesday, you still have gotten your fix of having sex in a car, because you feared you'd be found out by your cab driver, then how about your own car? Or, if you don't have a car because you're one of those city-dwellers who depends on public transportation, you can rent a car, drive it down to a park and get to it.

Try this position in the car: On Top.

3. Wednesday: In The Bar Bathroom

As someone who has had sex in many bar bathrooms the five boroughs, I can report that if you want to try having sex in a public bathroom, you want it to be a bar bathroom. While having sex in a posh restaurant's bathroom is far more sanitary, at a bar, no one is going to bat an eye when you and partner walk out of the bathroom together. Also, bars are noisy AF, so you can be noisy AF, too.

Try this position in the bar bathroom: Standing.

Whether it's your desk at home or the desk in your office at work, having sex on any sort of table top is always fun. While having sex on the desk at home will definitely be exciting, what's even more exciting is having your partner come to your office on your lunch break, throwing all your important paperwork on the floor, and going for it right then and there. Wow. With this move, you'll totally forget that sex in an Uber was ever part of your fantasies.

Try this position on the desk: X Marks The Spot

5. Friday: In The Elevator

Oh! Elevator sex! Now this is some of the most fantastic sex you'll have because it's a race against time, from one floor to the next. It's also hot, because you never know if you're going to get caught with your pants down — literally. While you can always hit the emergency button to give you and your partner more time, a lot of the thrill has to do with trying to finish up before the elevator doors open again. That's why you need a position that's ideal for a quickie.

Try this position in the elevator: Standing.

6. Saturday: On The Beach

Sure, it may be winter in the Northeast, but that doesn't mean it's winter everywhere and, with the right gear, you can still have sex when it's 30-something degrees out. It's just all about your sleeping bag and making sure you have a hat on your head. But no matter what the temperature in your neck of the woods, as long as you've prepared with a blanket to make sure you don't get sand in your nooks and crannies, beach sex is simply delicious. And, when done right, not a soul will know you're mid-getting laid.

Try this position on the beach: Spooning.

7. Sunday: In The Stairwell

Try this position in the stairwell: Modified Doggy Style. (Although you definitely want a shirt or pair of pants under your knees.)

Have fun out there!