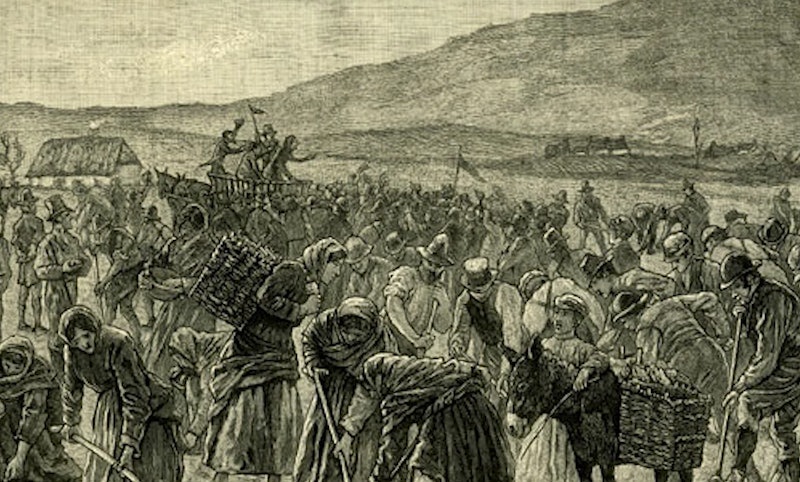 Many things come to mind when we hear the word "boycott," among them Rosa Parks and the Montgomery bus boycott. But what about the word itself? It's no accident: The origins of the word "boycott" reveal that it all began with one man who greatly displeased a group of tenant workers. In a recent video on the YouTube channel Today I Found Out, host Daven Hiskey explains the etymology of the word and how it was given its meaning.

The name comes from a 19th century Englishman, Captain Charles C. Boycott. But first, we have to start in Ireland. At the time, just 0.2 precent of the population owned the majority of the land in the country; but the owners didn't live there. Instead, they rented the land out to tenant farmers. In the middle of the 19th century, these farmers started demanding fair rent, free sale, and fixity of tenure. The Irish National Land League was particularly passionate about it.

In September of 1880, the Land League's leader, Charles Stewart Parnell, said that instead of killing a farmer who bid on an evicted neighbor's land (like the crowd suggested), that person should simply be shunned in every way possible — or boycotted, although they didn't have the word yet.

(That's Parnell up there.)

They wouldn't have to wait long, though, because the first documented use of the term was just two weeks later. This, of course, brings us back to Captain Boycott.

Boycott was a land manager for the third Earl of Erne, John Crichton. Because the harvest that year wasn't spectacular, Boycott offered the farmers on his land a rent reduction of 10 percent; but they demanded 25 percent. The Earl of Erne refused, and 11 of the tenants ended up never paying their rent. Thus, Boycott sent out the Constabulary to serve eviction notices to the homes. When the tenants of the land realized what was happening, the women started throwing rocks and manure at the Constabulary until they were unable to serve the notices to the heads of the households — something required by law for the eviction notices to be official. Since some of the notices went undelivered, these people didn't have to leave their homes.

The fired up masses took Parnell's earlier advice, and completely shunned Boycott and people who worked for him, who eventually left and were often threatened until they too joined in the ostracizing. Boycott was left with a large estate and no farmers to tend to the crops. Other businesses started abandoning Boycott as well, making it hard for him to even buy food.

In late November, Boycott fled to Dublin, but he wasn't much better off. He was met with hostility, and any business who considered working with him was threatened with "boycott." Charles Boycott's story was widely publicized; and within 10 years, any business who somehow disappointed the Irish National Land League was quickly boycotted.

Eight years later, in 1888, the word found its way into the New English Dictionary on Historical Principles, which we more commonly refer to as the Oxford English Dictionary . It spread throughout other European languages and made its way to America, when Boycott tried and failed to visit friends in Virginia using the name Charles Cunningham. The newspapers exposed him and published his whole story, and the word "boycott" became part of our American English language.

Now, whenever you talk about boycotting, you'll know you can thank Boycott for that, and his rent reduction that just wasn't enough.

Check out the full video below for the complete story on Charles C. Boycott and how the word got its start: