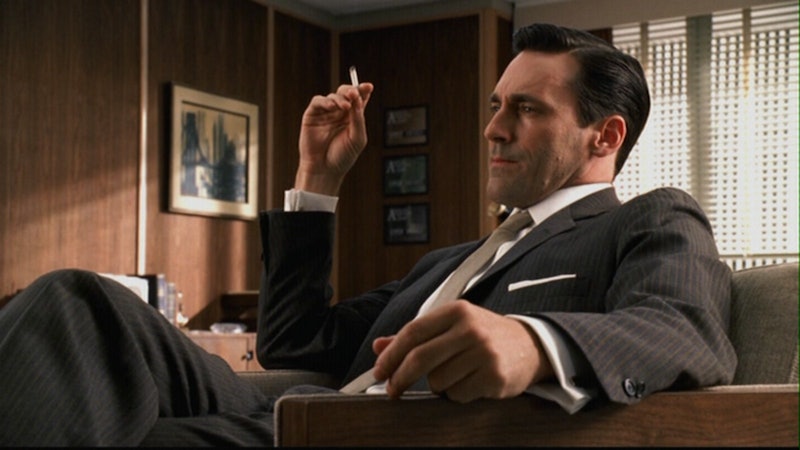 Two and a Half Men felt like one of those shows that would be on TV forever... and it almost was. But, it was announced on Wednesday that the popular CBS sitcom (which had more off-screen antics and casting changes than actual memorable plot lines) would be ending after 12 seasons. Two and a Half Men will come to a conclusion during the 2014-2015 TV season, and apparently it's going out with a bang. (Apparently the raunchy comedy starring Ashton Kutcher, Angus T. Jones, and Emmy-winner Jon Cryer will conclude "with a season-long event.")

But Two and a Half Men isn't the only show exiting next season to make way for the next big thing (whatever that may be, now that How I Met Your Dad is kaput). Long-running comedies like Parks and Recreation (sniff!) and Cougar Town will also wrap things up for good next season, while dramas like Parenthood (sniff sniff!), Boardwalk Empire, and Mad Men also make their way out.

While it's hard to say we'll really miss Two and a Half Men (the humor was pretty bottom-of-the-barrel on its best days and the firing of former leading man Charlie Sheen unleashed his "winning/tiger blood" tirade on the world), we'll definitely have some adjusting to do when it comes to other shows bid adieu in their upcoming final seasons.

What We'll Miss: Um, everything? We'll miss Leslie, and waffles, and friendship, and Ron Swanson, and Tom's business ventures, and Treat Yo Self, and Champion the dog, and Ben's failed claymation movie, and Perd Hapley, and Lil' Sebastian, and Jerry/Larry/Gerry/Gary, and...all of it. Just all of it.

What We Won't Miss: Watching it start to lose a little steam and the idea that this show might not end on top. It's always best to quit (sorry, Mark Brandana-quits) while you're still on top.

What We'll Miss: See above! Timothy Olyphant may just have the most handsomely devilish smile on television and that will be a void that will be hard to fill. Oh, and the show is a slick, well-written crime drama based and a reminder of Elmore Leonard's incredible legacy.

What We Won't Miss: Season 5 was pretty weak, so, like Parks and Rec, it'll be better to see the show go now rather than leave a bad taste in our mouths.

What We'll Miss: Love or hate the show, you have to admit some of their covers were not only incredible, but downright better than the original. (Sorry, Katy Perry!) It introduced us to some tremendous talent, including some we had far too short an amount of time with.

What We Won't Miss: Where to begin?! The outlandish story lines (even by Glee standards), the off-screen rumors and drama, the fact that it hasn't been a solid, cohesive, or even remotely decent show in years.

What We'll Miss: This is one of the smartest, sexiest dramas that's ever been on TV. It's incredibly well-acted (even if the Emmys refuse to acknowledge what a powerhouse cast this is) and impeccably written, and the idea of not having Jon Hamm on our televisions every week is more depressing than Don Draper himself.

What We Won't Miss: The glacial pacing, for one. But mostly we're glad we won't have to guess what the hell is going on in this absurdly vague "Next week on Mad Men" commercials.

What We'll Miss: The Bravermans, of course! This was not only one of the most likable television families, but one of the most relatable, too. They've seen their share of ups and downs, but they're always there for each other in the end. We'll always miss well-written, well-acted Jason Katims dramas. Sigh.

What We Won't Miss: All of the ugly crying that Parenthood causes, which is to say, a lot.

What We'll Miss: This was one of the best ensembles out there, for one. Boardwalk Empire may not have become the second coming of The Sopranos we all hoped it would be, but boy, did they know how to surprise the hell out of viewers.

What We Won't Miss: Another show to watch on Sunday nights? One less series on our dance card is a-ok with us.

What We'll Miss: Charlie Homina-Homina-Homina Hunnam! Okay, yes we'll miss him, but we'll also miss the fact that this was a biker drama we all got incredibly invested in. Who knew?

What We Won't Miss: Some of the violence on this show could be straight-up stomach-turning, even on a TV landscape that's jam-packed with it.

What We'll Miss: Sooookeeeeeeeh! Sure, this show was 100% pure cheese, but that didn't mean it wasn't a delicious guilty pleasure. (See: abs.)

What We Won't Miss: Aside from the fact that vampires are so over in pop culture, True Blood went from kitschy, sexy fun to flat-out ridiculous mess around Season 5. It's time for it to go.

What We'll Miss: This was the little show that could. After getting bumped from ABC, TBS wisely saved the kooky comedy and we all drank to that. (And so did the Cul-de-Sac Crew...constantly.) Plus, it gave us one of the greatest sitcom games ever: Penny Can!

What We Won't Miss: The icky Travis and Laurie romance. Why?!

What We'll Miss: It sure is fun to have a show to collective hate on the Internet, isn't it?

What We Won't Miss: Oh, there's so many things, but all of the Aaron Sorkin chest thumping and the horrendously offensive female characters (those broads sure don't know how to do much, do they?!) are pretty high up there.

More like this
The Time Traveler’s Wife Book Has A Heartbreaking Ending
By K.W. Colyard
Twitter Is In Tears After *That* Jack & Randall Parallel On 'This Is Us'
By Grace Wehniainen
Everything To Remember From 'Stranger Things 3' Before Watching The New Season
By Gretchen Smail
The 'Grey’s Anatomy' Season 18 Finale Might Have Had A Sneaky April Easter Egg
By Grace Wehniainen
Get Even More From Bustle — Sign Up For The Newsletter