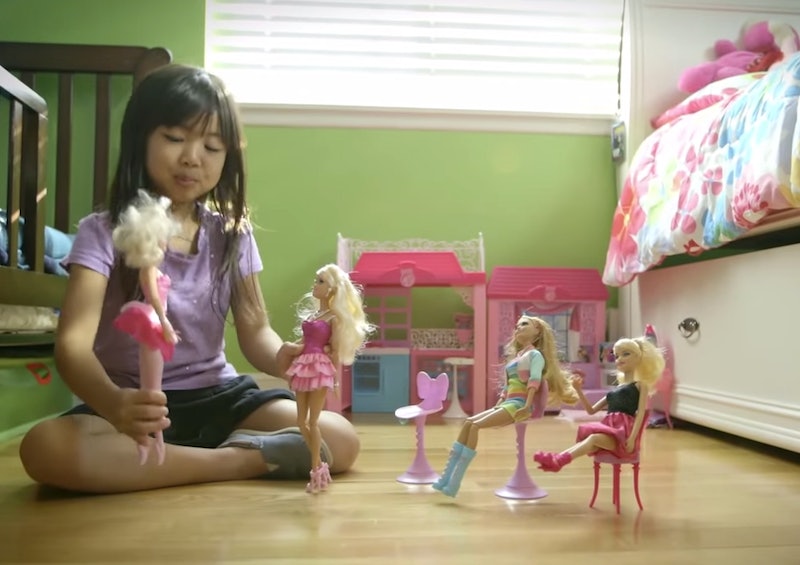 Is Barbie "aspirational" or "unrealistic"; "imaginative" or "limiting"; "adored" or "forbidden"? That's what a new Mattel-sponsored video wants to find out. The film series, collectively called "The Barbie Project" will show us actual girls playing with Barbies. The basic point is to see whether or not Barbie's critics are right about the message the doll sends little girls.

On the one hand, this film is clearly biased. It's created by Mattel, the same people who make Barbie — and make quite a bit of money off her, too. Still, though not a balanced look at Barbie, the film makes a good point — shouldn't the way little girls actually play with Barbies matter, too? And how can we make judgements about what effect she has without paying attention to the people whose lives she's impacting?

In the preview for the documentary, we see Barbies being superheroes, Barbies flying, Barbies thrown off of bunk beds, Barbie's dancing to beat boxing, and yes, a little of the stereotypical hair and makeup stuff. All that's missing seems to be a scene where a little girls strips off Barbie's clothes and examines her bizarrely proportioned body.

And that, actually, is still the heart of the issue. Yes, Barbie can be used in great ways as a tool for any girl's imagination — but so can any other doll. I wouldn't be surprised if little girls played with their stuffed animals in the same way, and I could certainly picture them doing all these things with the much more positively proportioned doll Lammily.

But when they play with Barbie, when they examine her body, they get a completely unrealistic idea of how female bodies work.

Plus, there's the fact that Barbie isn't just a doll anymore. She's got her own movies and games, and even though kids can make her into anything they want during playtime, Barbie has a definite persona of her own, too. She's sweet and poised and perfect, and all sorts of other things the worlds says women should be. And whatever negative emotions she feels are easily resolved. Barbie doesn't get blindingly angry or crushingly sad, or go through long periods of not knowing who she is. And as such, she sends a particular message to girls.

Plus, her proportions are still way out of whack and she actually has a negative impact on girls' career ambitions. And it's no wonder.

It is important to remember that Barbies aren't inherently evil, and that little girls aren't automatically brainwashed just by picking them up. I mean, I played with Barbies as a kid, and I turned out just fine, if I do say so myself. Like a lot of little girls, in fact, I had super awesome adventures with my Barbies. But then, I had super awesome adventures with all sorts of toys, and I have enough faith in little girls to believe they can do the same. In other words, Mattel raises a good point...and Barbie is still problematic.