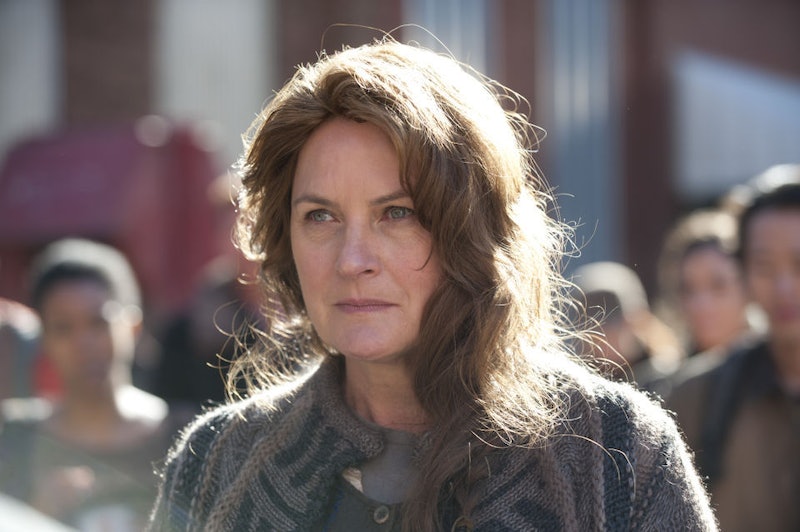 Our ragged band of survivors spent a large chunk of The Walking Dead Season 4 trying to get to a place called Terminus. They thought it would be a safe haven, but it turned out to be just another in a long line of terrible places with awful people in them. (When will Rick & Co. learn?) Few things on The Walking Dead have inspired as much speculation as Terminus and its inhabitants. All summer long, fans have been coming up with theories on what exactly the place is, who its people are, and whether or not its a veiled version of a storyline from the graphic novels. But our concern isn't so much with Terminus as a whole, but more specifically with the shady lady running it: The Walking Dead enigma Mary.

The first human the survivors meet upon arriving at Terminus is a middle-aged woman who introduces herself as Mary. She's standing over a large grill and offers the group some meat. It becomes clear that she's the leader of this community... And if The Walking Dead has taught us one thing (other than the most creative ways to kill zombies), it's to never trust a seemingly benevolent leader.

While we count down the clock to the Season 5 premiere (which the cast is touting as TWD's "most ambitious first episode" yet), let's make some predictions on who Scary Mary might turn out to be.

By far the most popular theory swirling around about Terminus is that the compound is housing a band of cannibals. Robert Kirkman's comic series has a storyline about a group of maneaters called "The Hunters." While Terminus wouldn't be a direct translation of that plot, it would be a neat way to adapt the idea of cannibals while remaining surprising for both readers and non-readers alike.

The very first thing we ever see Mary doing is barbecuing large chunks of anonymous meat, which is probably what fueled this theory in the first place. With Beth having just gone missing, many viewers seem to think that she was kidnapped by the Terminus inhabitants and was already lying on that grill by the time the rest of the group arrived. Is Beth really dead? Is Terminus a haven for cannibals? Is Mary their human-flesh-eating leader? It's all surprisingly possible.

Some sharp-eyed viewers noticed that the portrait Michonne finds in an abandoned house in the eleventh episode of Season 4 pretty closely matches Mary in appearance — mostly her brown, braided hair. Ominously, the painting is covered in what looks like blood, with the subject's mouth and right eye crossed out, and the word "NO" scrawled multiple times. In the same house, Michonne finds what looks like an entire family dead in a children's room. If that portrait really is Mary, could she have been a housewife who, after the zombie outbreak, had a psychotic break and slaughtered her entire family? If so, she's probably not the most mentally stable person around Terminus — and if she was capable of killing her own children, who knows what she's going to do to our survivors.

Another possibility is that Terminus is actually The Sanctuary from the comics, an encampment consisting of self-proclaimed "Saviors" who are really just thugs who take whatever they want from surrounding communities and rape and murder whoever resists. They're led by a ruthless man named Negan, who makes The Governor look like Gandhi by comparison. TV shows have been known to gender-swap roles from source material before, often to compelling effect. (See: Starbuck on the Battlestar Galactica reboot and, most recently, both Alana Bloom and Freddie Lounds on Hannibal .) Changing Negan's gender would certainly be a clever way of disguising the character's introduction.

It all comes back to that side braid. Mary's hair brings to mind a very popular character with a very similar 'do: The Hunger Games' Katniss Everdeen. Her District 13 side braid is one of the character's most distinctive physical traits, which makes us think that TWD writers are intentionally drawing parallels to that dystopian franchise. If Mary is supposed to remind us of Panem, does that mean that she's basically Dead's version of President Snow, and she's about to enlist our survivors in a deadly game for her community's amusement? It wouldn't be the first time we saw people in this post-apocalyptic future enjoying violence as entertainment. (Remember Woodbury and its zombie-gladiator arena?) If Mary turns out to be a sadistic gamemaker who forces our beloved group to fight to the death... remember, you heard it here first.

More like this
‘Squid Game’ Creator Hwang Dong-Hyuk Just Dropped A Major Season 2 Tease
By Brian Anthony Hernandez and Bustle Editors
Everything To Know About 'Evil' Season 4
By Meguire Hennes
Does 'Locke & Key’s Ending Mean There Could Be A Season 4?
By Sophia Moore
‘The Simpsons’ Will *Finally* Address How They “Predict The Future”
By Sam Ramsden
Get Even More From Bustle — Sign Up For The Newsletter