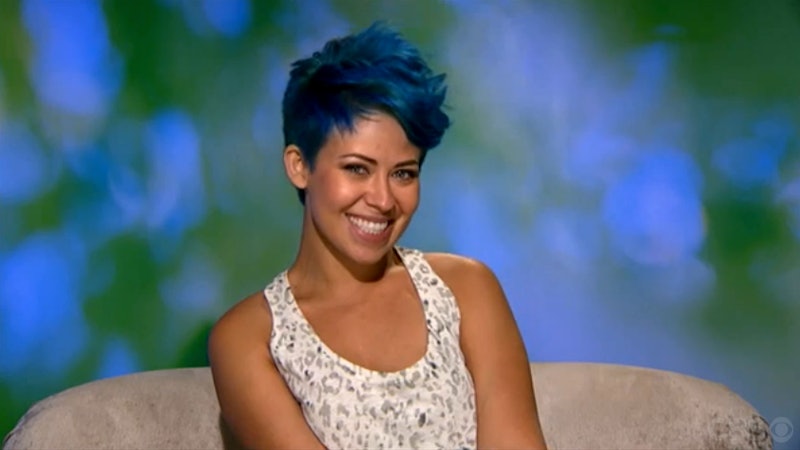 Now that we've determined Donny is really Captain America, been introduced to the horror that is a "slopsicle," and learned the word "caltoru," it's time to talk about who will be the first houseguest evicted from Big Brother 16 on Thursday night. Donny won the Power of Veto and rightly took himself off the block, and Caleb sent Joey to take his place on the chopping block during Wednesday night's episode. So now the houseguests must choose if they'd rather have Joey or Paola in the house for another week. Judging by Wednesday night's episode, the odds are not in Joey's favor.

Though Joey wasn't HoH this week, she basically put herself on the block. Major props to Joey for standing up and trying to expand/revive the "El Cuatro" all-women's alliance started on Day One with herself, Paola, Amber, and Nicole, but she really went about the whole thing completely wrong. She confronted Amber and Paola about starting the alliance up again out in the open, where Derrick was able to notice and inform the rest of his "Bomb Squad." Needless to say, the almost all-male alliance wasn't happy about a potential competitor.

To make matters worse, Joey admitted to her attempt like she was ashamed of what she had done. If you're not going to hide it, at least own it. And Caleb's condescending reprimand of Joey's actions, ironically telling her it's too early to form an alliance, was just ew. Once Donny took himself off the block, all of this helped Caleb and Frankie to easily nominate Joey and not get any blood on their hands.

So why did they think it was so easy? With six members of "The Bomb Squad" eligible to vote in the eviction, the alliance only needs one more to secure the vote to get out Joey, which should be pretty easy to do. Since Joey made that bold but not very bright move, the other houseguests basically treated her like a leper, not wanting to be associated with the person with a huge target on her back. This early in the game, when someone seems to already have so many votes against him or her, it's too tempting to go along with the majority, so it's very likely that even the houseguests outside of "The Bomb Squad" will vote her out.

Joey would go on to freak the Frankie out and run around the house dressed as her male alter ego "Alex," yelling at the other houseguests to vote for her (him?) to stay and throwing pillows. It was all very weird and very ineffective. Well, it was effective in helping Joey dig her grave a little deeper at least.

There's also the fact that Paola has not shown herself to be a strong player yet. She performed poorly in the HoH, Battle of the Block, and Power of Veto competitions, so the other houseguests probably think it's a good idea to keep someone around who probably won't have much power in the game. Paola also seems to be doing a lot better in the friendship department, with Donny, Jocasta, and Amber as friends and maybe potential allies down the road.

Let's not forget that America (yes, you) voted Joey as the first member of "Team America," the secret three-person alliance that's supposed to wreak havoc on the house or complete some secret missions or something like that. SPOILER ALERT: In a last-ditch effort to save herself, Joey apparently told Hayden that she was voted "America's Favorite" and implied that she would have some special powers to help him and others in the house if she will be safe from eviction this week.

Joey didn't really reveal to Hayden what being "America's Favorite" means, so I'm not sure how effective her efforts will be in the end. It was basically the last trick she had up her sleeve, so she had to do it, but doesn't she realize she has upset her other alliance members, i.e. the millions watching at home? So far, Joey hasn't shown any skill when it comes to the Big Brother game.