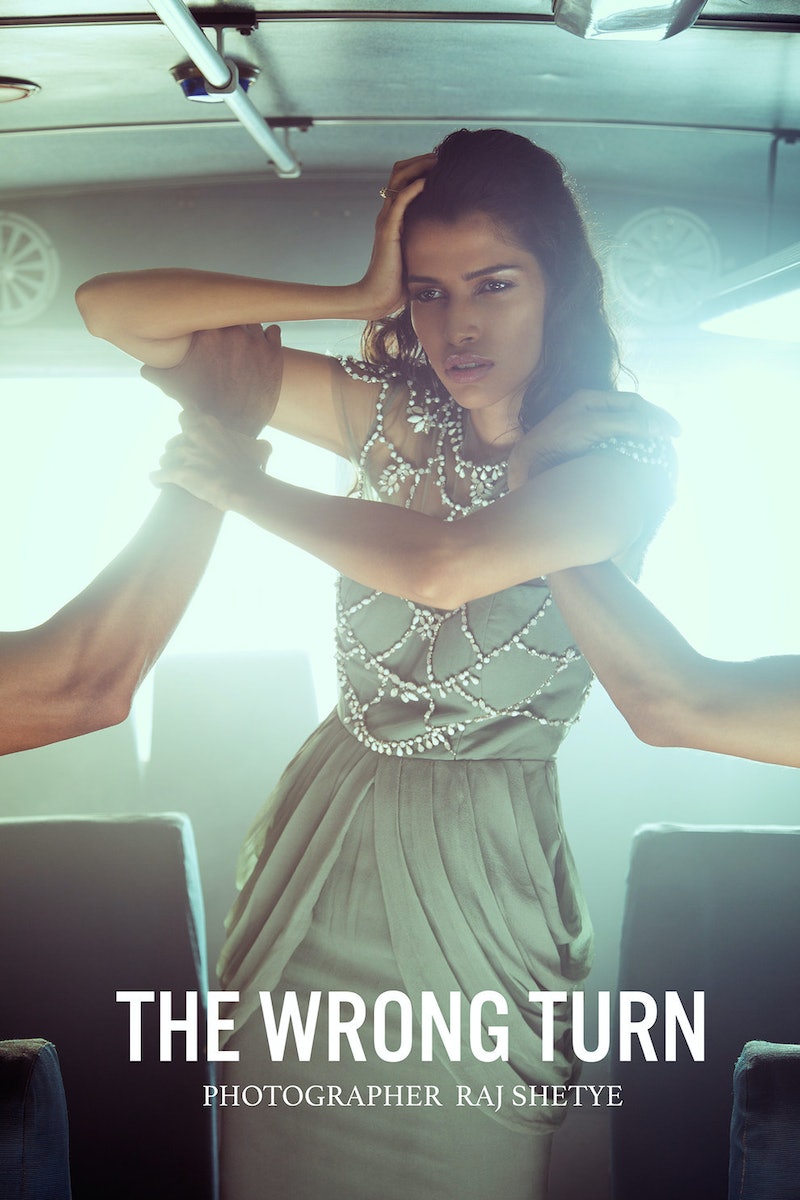 India's ongoing problem of gang rapes has inspired worldwide condemnation, huge soul-searching among the Indian media — and apparently, inspiration for a Mumbai-based photographer, who just released a photo shoot portraying a model fighting male attackers on a bus. The backlash has been huge: The images have gone viral in India, and publications as venerable as The Times Of India are publishing angry articles about the photo shoot, calling it "disgusting" and "appalling." It's clear that the images, which have now been pulled from photographer Raj Shetye's website (er, too late, mate) touched a nerve.

It can be difficult to articulate why exactly this photo shoot is so wrong when your first reaction (like mine) is simply to swear loudly at the computer screen in disbelief. But it is worth trying to dissect, since the problem here is multifaceted. This series is illustrative of a worldwide culture in which we glamorize violence against women, and exploit tragedy for personal expressions and financial gain.

He's got a host of explanations: that he's putting a spotlight on the issue of violence against women; that he's criticizing India's caste system; the list goes on. But as he's learning, once it's out in the world, art — if we can call it that — kind of has to speak for itself. And these pictures are saying all the wrong things.

There's no question that the shoot is inspired by the December 2012 Delhi gang rape and murder of a young woman on a bus, even though Shetye (who didn't reply to Bustle's request for comment) has insisted to various outlets that it's not. (Twitter's not buying that claim either: #Nirbhaya, the pseudonym for the anonymous victim of the December crime, has been trending in India since the shoot broke.)

The pictures show a woman on a bus being pawed at, bitten and grabbed by a series of male models. The violence isn't symbolic, either: While a few show a desultory sort of grab at the model's arm, one shows her being physically held down.

So we aren't discussing a vague reference or an abstract concept that could be taken another way. The shoot is very clearly meant to evoke that specific act of sexual assault. That's intensely violating for the victim's family, and it's also violating and upsetting for every victim of sexual assault and every person who's known one. Your experience is for our use, this shoot says. You weren't in control of your body, and now you're not in control of your trauma either.

Defenders have already started to pop up, not least the photographer himself. He's got a host of explanations: that he's putting a spotlight on the issue of violence against women; that he's criticizing India's caste system; the list goes on. But as he's learning, once it's out in the world, art — if we can call it that — kind of has to speak for itself. And these pictures are saying all the wrong things.

Does the model at least seem empowered? She (mostly) looks more angry than miserable. However, she has the same cookie-cutter look we've come to expect from all high fashion models: the ferocious gaze, simultaneously angry and smoldering. It would get her high marks from Tyra Banks, and it all adds up to the normal visual language of high fashion, one that we're utterly used to consuming and know by heart. And that's part of the problem.

Don't get me wrong — mixing visual languages in art can be a really powerful way to give a grim issue impact. Combining magazine-editorial glossiness with violence has been some of the most confronting work of photographer Guy Bourdin, for example. But Raj Shetye's images don't use the combination of slick, luxurious Vogue photography and real traumatic crime to make the Nirbhaya rape look important. Instead, they literally gloss over it. They make it look shiny, easy to look at, and even acceptable.

That's the horrific part of this shoot: It trivializes rape, homogenizes it, even fetishizes it. Taking a series of brutal sexual assaults and making them a display of a model's assets — transforming a situation where a group of men raped and murdered a woman into a performance for the male gaze — is grotesque. And the male models are part of the issue. 'Cleaning up' rapists to make them glamorous fashionistas changes the focus from their crime to their clothing and good looks, and that's unacceptable.

Shetye points to the fact that he hasn't credited any of the designers of the clothes as evidence that the shoot wasn't "commercial" and doesn't benefit anybody financially.

"I didn't want to create something irresponsible," he told Buzzfeed. But the tags he put on the images on his website — HOT, SEXY, MALE, REVENGE, KIDNAP, LOVE — don't exactly point toward serious social commentary. They point to taking a series of tragedies with real people and manipulating them into an easier, more abstract narrative. This doesn't make us care more about the women who suffered. This makes it easier to objectify them.

Rape is not glamorous or beautiful. It should not be used to sell things, or to inspire admiration, or to show off your artistic skills — unless you have an artistically sound and compelling statement to make, which Shetye didn't here. It definitely isn't there to be HOT or SEXY. It is a grievous crime, and giving it a glossy sheen, as Shetye attempted to do, is unconscionable.