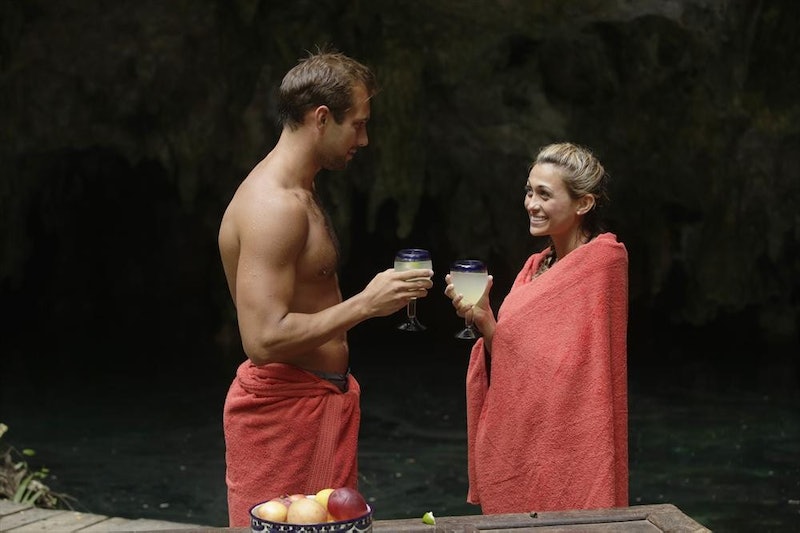 One of the biggest surprises of Bachelor in Paradise is that it may have created an actual couple in Marcus Grodd and Lacy Faddoul. At first, they seemed pretty annoying but in the past few episodes they've started to become pretty sweet. You can't blame me for being late to the Marcus and Lacy train; in the first couple of episodes, compared to completely crazy couplings like AshLee and Graham or Dylan/Elise/Chris, Marcus & Lacy seemed tame and boring. They never had the big fights or weird moments, just got serious right away and spent all day and night canoodling like two subjects of a bad gossip column.

But after Lacy's health scare, Lacy and Marcus' relationship won me over. It's just hard to be cynical in the face of two people that really seem to care about one another. Whether Lacy was just suffering from a round of food poisoning or having an allergic reaction to AshLee and Graham's relationship, it was serious enough that the producers and Lacy agreed that she needed to be hospitalized. And Marcus was unquestionably by her side the entire time. Contrast that to how AshLee remained awkwardly standing on her mark while Graham had to leave the set, and it's obvious which couple is based on actual emotions rather than Instagram stalking and one frickin' dinner date.

Obviously it seemed a little forced when Marcus and Lacy got together immediately, but now that they're committed to one another and are basically off-limits to all of the new cast members coming into the house week after week, they've become like the sage elders to the rest of the cast. It's incredibly goofy to see them give relationship advice, considering Marcus and Lacy have been together for all of ten days, but in the fishbowl of Bachelor in Paradise, they are the equivalent of the grandparents married for forty-five years.

For example, when the WWE's answer to Macklemore, Cody, came on super strong to Michelle, Lacy hit the nail on the head. The guys had the roses that week. Working that hard for affection and throwing out the "love" conversation waaaaay to early made him seem like a cheeseball. (And so did those bizarre engagement photos, but that's not entirely his fault, ABC.) And Lacy seems pretty skeptical about both AshLee and Jesse's motives.

Seeing Marcus (with his polka dot socks) lay by Lacy's side in the hospital bed was kinda cute, in a sickly sweet, too adorable to be bearable kind of way. It may have even melted my icy, Bachelor-proof heart a little bit. If the rumors are true and they're still together (and it's becoming super totally obvious that they are, just look at Marcus' Instagrams), they may have convinced me that their love could be… real.