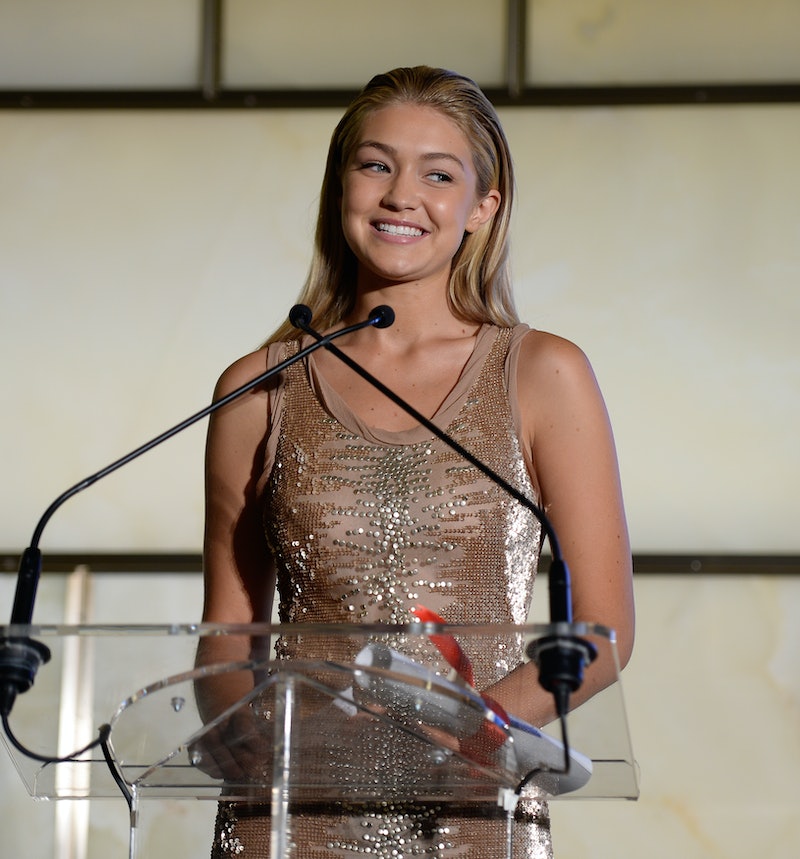 It looks like New York Fashion Week is much more than just a way for designers to show off their new clothing lines. It also seems to be the perfect setting for new romances — at least potentially. After being spotted together over the past week, there are rumors Joe Jonas is dating model Gigi Hadid. If this is true, they seem like a great match. I'd ship JoGi HaNas! (Is that what the cool kids are calling them?)

According to E!, the two have been friends for awhile, but were both dating other people until recently. An insider who spoke with E! said, "Gigi and Joe lately have been hanging out a lot lately [sic]. They have lots in common and she loves how easygoing he is." Well, that's pretty adorable, and isn't friendship one of the most important foundations for a good relationship?

If you're scratching your head and wondering who Gigi Hadid is anyway, don't fret. It doesn't mean you're getting old or that you're out of the loop. The 19-year-old is a model who's just beginning to make her way in the spotlight. Maybe you remember her from when she dated Cody Simspon? But really, let's stop associating her solely by who she's dating. She's her own person, after all.

Here are all the things you should know about Gigi Hadid, beyond the fact that she may be dating a Jonas:

Yup, Ariana Grande's brother is buddy-buddy with Gigi. Technically Frankie is like the male Taylor Swift (Maylor Swift?) when it comes to friendship. I'm not even joking that he's literally friends with everyone — at least according to Instagram.

And friends with Ireland Baldwin

Baldwin is another young model who's making a name for herself. So basically, Hadid is in good company.

She kills it on the red carpet

Don't believe me? Here's an entire slideshow of evidence. She's a fashionista, for sure.

Not only has she modeled for Tom Ford, but she was also in the Sports Illustrated Swimsuit Issue.

And appears in music videos

She starred in Miguel's "Simplethings" video. Before that, she was in ex-boyfriend Cody Simpson's "Surfboard" video.

Are you still reeling from the shock that Iggy Azalea's name is Amethyst Kelly? Well, prepare to have your mind blown again: Hadid's actual name is Jelena. (Yup, just like the name for everyone's least fave on-again-off-again couple Justin Bieber & Selena Gomez.)

She hung around on the Justin Bieber's yacht back in May. Apparently they're "just friends," but according to a source he would "hook up with her in a second but hasn’t yet." If this is true, please calm down, Biebs. And while you're at it? Put a shirt on, thanks.

She was on Real Housewives

The Beverly Hills edition, to be exact. Her mom, Yolanda Hadid Foster, is an actress on the show, so Hadid has appeared in episodes as well.

Hadid is currently a sophomore at the New School in NYC. According to Hadid, her classmates don't recognize her or know she's pretty well-known outside of school.

So there you have it! If they are dating, Joe Jonas isn't the only star in this relationship. Now that that's settled, I have one remaining question: Do you think he serenades her with classic JoBro songs? I really hope so.