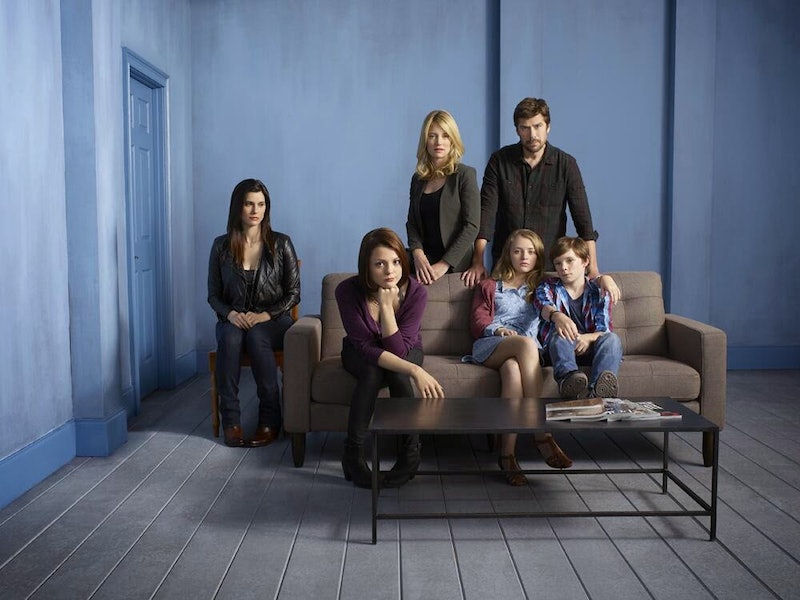 You had me at hello, Finding Carter. (Or should I say, fro yo?) I proclaimed months ago that Finding Carter would be my newest television obsession, but I would have no idea just how invested I would get in this MTV drama. The only problem with getting seriously invested in a television show is the crash you feel after it goes on hiatus, which Finding Carter just did. The show aired its Season 1 finale on Tuesday, and though it concluded with the biggest shocker of all (Lori kidnapped Carter — again!) it still left its audience with quite a few questions for Finding Carter Season 2.

We'll have to wait until the officially-happening second season to get any real answers about Finding Carter, which is frustrating but definitely not the worst thing to ever happen. After all, the worst thing to ever happen would be the idea that absolutely none of our questions would ever get resolved due to a completely unfair cancellation. Luckily, MTV loves this show just as much as fans do, which means that, as Finding Carter fans, we must sit by and wait for the show to deliver the answers at their own pace. Sigh.

So what questions are fans looking to have answered in Season 2? Here's just a sample of the things we still need to find out from Finding Carter.

Do Lori & David Have A Past?

So many theories have been built around the idea that Lori and David have some sort of past, and the idea that something happened between Carter's kidnapper and her biological father became highly plausible in the Season 1 finale, when Lori handed Carter a photo that she claimed to have took of a sleeping David. From the outside it would appear that David and Lori had an affair — and if that's the case, David has a lot of explaining to do. After all, why wouldn't you tell the police who are looking for your kidnapped daughter about the vengeful lady you used to sleep with?!

What really happened to Bird?

Early in Season 1, Bird confided in Carter about being attacked by a person wearing a mask. The attack was never mentioned again, though Bird's confession did deepen our understanding of Bird and why she behaves the way she does. Vanessa Morgan, the actress who portrays Bird, hopes that the show will bring up the issue again in Season 2 — it would be great for the series to explain Bird's trauma, perhaps through Bird finally having the opportunity to confront her attacker.

Will Max & Taylor get back together?

Max and Taylor were adorable together, which is why it felt like a punch in the face when Max broke up with Taylor during the Season 1 finale. If Maxlor doesn't get their romance back on in Season 2, there will be MANY croutons sent to MTV by yours truly in protest.

Have we seen the last of Crash?

Ugh, so much dissonance right now. Crash is the embodiment of bad news, but damn is Caleb Ruminer dreamy. Either way, when we last left Crash, he was waiting for his arraignment for accidentally shooting Max. Considering that the last time Crash got arrested was considered his "last chance," it doesn't look like Crash will be a free man any time soon. But does that mean that his days on the show are numbered? I'd like the series to wrap up Crash's storyline in a nice, neat little bow as quickly as possible. (Ruminer could totally join the cast of Pretty Little Liars, though. I'd be cool with that.)

Why did Lori kidnap Carter?

This is the big one, guys: WHY did Lori kidnap Carter and raise her as her own daughter? We know that Lori isn't exactly a sane person, but it takes a particular brand of crazy to spend 13 years living a relatively peaceful existence with the child you captured. There has to be more to Lori's story than the vague blanket statements she keeps making to Carter.

We'll have to wait a while to get these answers, but I have faith that Finding Carter will give us all these answers and more in due time. If, you know, we don't die from the wait first. Images: MTV; Giphy; mtvfindingcarter/tumblr