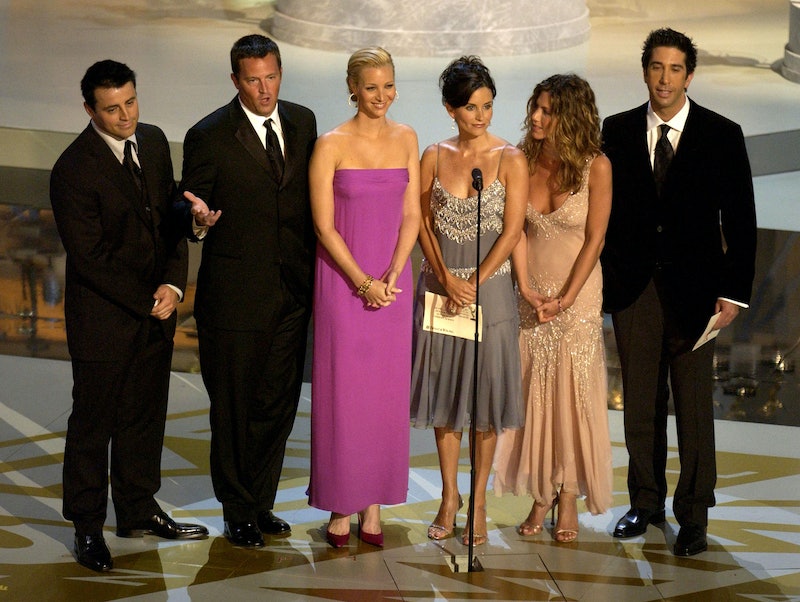 When you hear the names Jennifer Aniston, Matthew Perry, Lisa Kudrow, Matt LeBlanc, Courteney Cox, and David Schwimmer it's pretty much impossible to not automatically think Rachel Green, Chandler Bing, Phoebe Buffay, Joey Tribbiani, Monica Geller, and Ross Geller. That's because for the past 20 years, Friends has been a television and cultural phenomenon that turned its talented cast into superstars and all but made them synonymous with their on-screen characters. Heck, an entire generation of women wanted to model their hair after Aniston's character's — it was called "The Rachel" not the Jennifer, after all.

But, even though the cast will forever be associated with their Friends characters (maybe with the exception of Aniston whose headline-grabbing, off-screen love life may trump that), they still have some other great performances on the big and small screen worth acknowledging. All of the cast members have gone on to land plenty of lead roles in their post-Friends careers, but they are often forgotten.

As fans celebrate the 20 year anniversary of the Friends pilot airing on NBC and changing all of our lives for the better, it's time to give kudos to the cast for their work outside of the iconic sitcom.

Aniston won an Emmy for her performance as the bubbly Rachel Green, but even if the actress is great at playing fun and flirty, she's got an excellent knack for playing down and demure. Case in point: her role as the depressed, cheating wife Justine in the 2002 dark comedy The Good Girl. Aniston may be a rom-com queen, but her strong suit lies in roles where she is more emotionally exposed. (See also: her terrific work as the down-on-her-luck and poor pal in the ensemble effort Friends With Money.)

Alright, so pretty much every Matthew Perry performance on TV and in the movies is some variation of Chandler (hey, the guy knows how to play sarcastic), but his work as a sketch comedy writer/producer Matt Albie deserved way more development than just one season.

As much as I love her Phoebe-esque work in Romy and Michele's High School Reunion, there's simply no denying that Kudrow's best role outside of Friends was as aging, awkward sitcom star Valerie Cherish in HBO's cult darling The Comeback . Kudrow's hilarious performance was so damn good that nearly a decade after the show's single, low-rated, but critically-beloved season, The Comeback is getting a comeback. That is how good Kudrow is.

How do you recover from big screen flops and an even bigger Friends spin-off disappointment? By playing a fictionalized version of yourself on a show that winks at the cycle of celebrity. That's exactly what Matt LeBlanc has done on the Showtime comedy Episodes, and his self-aware, biting performance as, er, himself earned the actor a Golden Globe. If there's anything that puts Joey behind without putting Joey behind, it's been LeBlanc on Episodes.

Cox has appeared in some pretty damn good post-Friends roles (namely, the wine-guzzling comedy Cougar Town) but her best non-Friends role to date was on the big screen. The Scream movies single-handedly revived the slasher flick drama and Cox's role as the ruthless reporter Gale Weathers helped elevate the series. What could have been a one-note character became one of the saga's heroes (who could have guessed after the first one you'd be rooting for Gale?) and Cox made one of the most badass females in horror.

Perhaps taking a cue from his co-star Matt LeBlanc, Schwimmer discovered that the best person to play post-Friends is an exaggerated version of yourself. Schwimmer played "himself" on Curb Your Enthusiasm as Larry David's annoyed Producers co-star. At long last, Schwimmer got to play someone slightly less irritating than Ross.