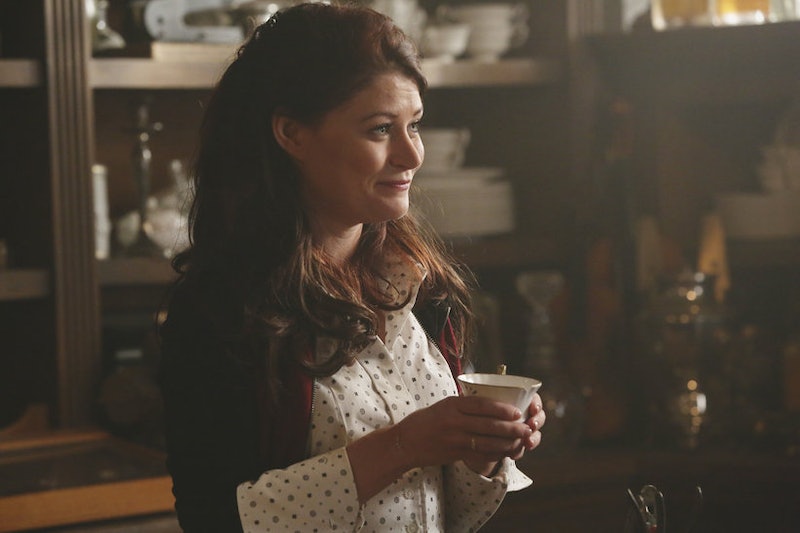 Are you sick of Frozen fever yet? Whether we like it or not, the Princess and Queen of Arendelle, along with a slew of other Frozen characters, are coming to ABC's Once Upon a Time on Sunday, Sept. 28. Only an act of true love can... I don't even know anymore. Do I wish there was more chatter around how Michael Socha's character from Once Upon a Time in Wonderland is going to figure into the season? Yes. Am I doing my best to find new ways to talk about Frozen without melting your brain? Yes! What we can get excited about is how these sisters will fit into the crazy puzzle that is OUAT. The producers hinted to TVLine that while someone in Storybrooke will not be happy to see the Arendelle sisters on the scene, someone will be pleased to see them.

The unhappy party has to be either whoever Elizabeth Mitchell is playing, Rumplestiltskin, or Regina because... she's Regina. Bless her heart. But unless Emma and Henry caught Frozen in theaters during their year in NYC, my bets are on Belle being the one who's excited for the new arrivals. In order to connect the two stories, I'm drawing on an unlikely source: Prince Hans, of the Southern Isles.

Hear me out. On Once Upon a Time, Belle is a noblewoman in a coastal castle near a town called Avonlea that fell during the Ogre Wars. (Fun fact: Avonlea is also the name of the fictional coastal town in Anne of Green Gables.) Belle's family all have French names and Australian accents. It's an odd fusion that's got me thinking... could this part of the Enchanted Forest be "the Southern Isles" of the Frozen universe? Hans has been cast, after all. Perhaps Belle and Hans are related and she warns Anna not to trust him?

Or, better yet, wouldn't it be fitting if Belle's former fiancé, Sir Gaston, was one of Hans' many brothers? Those two jerks seem like they could be cut from the same cloth.

We know we're learning more about Belle this season. Belle's mother Colette has also been cast. Colette will appear on the sixth episode of the season which, as EP Adam Horowitz tweeted, is titled "Family Business." Curiouser and curiouser. Colette is sure to be connected to someone else on this show. My head still hurts from the Peter Pan arc. As long as it's not Cora. Please, I am beyond done with Cora.

The only flaw in my theory is that "Hans" is definitely not a French name. He would be Prince Jean, of the Southern Isles. However, this is a land with ogres, wraiths, and mermaids. I think we can let a name slide through the cracks without too many complaints.

It's also possible that Belle and her mother visited Arendelle once the gates were open and the girls became friends. Or, maybe they were friends as children. Once Upon a Time doesn't have to marry the idea that Anna and Elsa were ice-olated for their entire childhood. Belle could be a research assistant helping them with Elsa's powers. Heck, she could even be related to Kristoff's mysterious family! There are so many questions that Belle could help us answer.

Hang in there, Belle!

With her new marriage already rocky with deceit, Belle could use a few allies. I'm always excited about episodes that aren't necessarily about her relationship with Rumplestiltskin. I respect "Rumbelle" shippers and I loved the idea of a metaphorical Beast at first, but this couple skeeves me out and I'm not alone. Sometimes the Dark One is just a little too dark for my tastes and I'm sad when Belle's kindness is abused.

More like this
10 Eurovision Moments That Celebrate The Weird & Wonderful Camp Extravaganza
By Sam Ramsden
Grey's Anatomy Fans Refuse To Accept Kaimelia's Shocking Relationship Update
By Brad Witter
Oops! The 'Stranger Things' Monopoly Game Has Spoilers For Season 4
By Alyssa Lapid
20 Photos From The 'Stranger Things' Season 4 Premiere To Make You Feel Old
By Alyssa Lapid
Get Even More From Bustle — Sign Up For The Newsletter