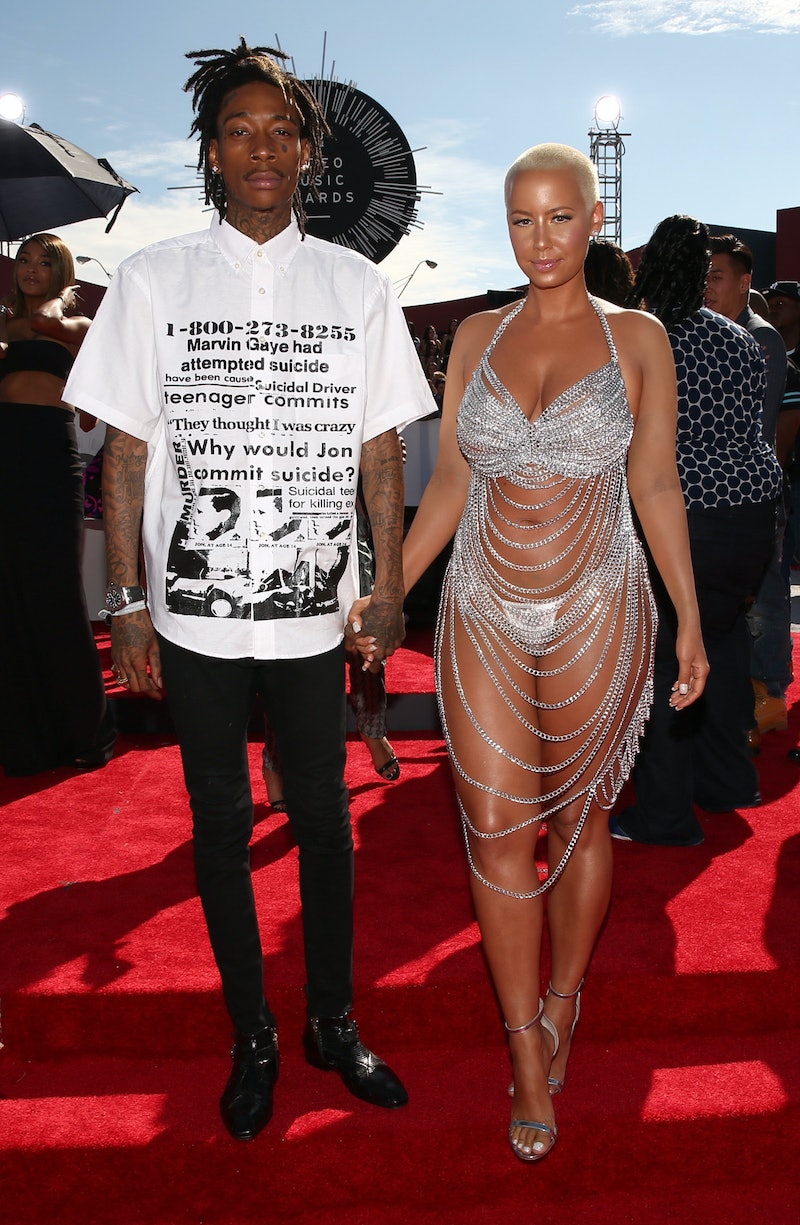 If you follow rapper Wiz Khalifa or his wife, model Amber Rose, on Instagram, it would seem that one year into their marriage they were still basking in some Valencia-filtered marital bliss. From cute selfies with captions like, "The Khalifa's," to a recent bunch of uploads of intimate snaps from their 2013 wedding, Wiz and Amber looked like they were majorly on the verge of becoming a power couple. The only thing standing in the way of this match-made-in-hip-hop-heaven romance? Oh, just the teeny-tiny problem of Amber Rose filing for divorce from Wiz Khalifa on Monday. That tends to put a damper on most relationships, ya know?

For fans of the couple, the news came as a giant shock, especially since their posts on social media showed no change or possible problems in their relationship. Just two weeks ago Amber posted a super sweet picture of Wiz and their (freakin' adorable) son Sebastian to Instagram, captioned "I can't even." A few days before that, she uploaded one of her and Wiz dancing at their wedding in honor of his birthday, saying, "Happy 27th Birthday @mistercap I'll love u forever....Hope this year is an amazing one for u sweetheart." Wiz also posted a few pictures of himself and Amber looking happy as usual. From the outside looking in everything seemed fine, but clearly that's not the case.

Celebrities using the press to make everything seem perfectly fine when it really isn't is not an uncommon practice, but in this day and age, celebs are using their own social media accounts to do it instead of a few well-leaked rumors, and it's all kind of... icky. Since every aspect of a celeb relationship gets analyzed by, well, pretty much everyone (much like I'm doing right now), it's not surprising. Going through a rough patch is bad enough normally, let alone seeing all the details on the cover of every tabloid in the supermarket. Still, celebs who use their own accounts to do the dirty work of tricking everyone into thinking they're A-OK just end up looking worse.

The couple probably most notorious for being master manipulators of the media are Beyoncé and Jay Z. Rumors about their impending divorce came out every other day this summer, but through Bey's lovey-dovey Instagrams of the couple looking picture perfect (especially with Blue!), and their family group hug on stage at the VMAs, suddenly the divorce rumors disappeared to make way for baby bump watchers. Beyoncé did the same thing following elevatorgate in May, by posting pictures of herself and Solange looking as happy as ever despite her sister's altercation with Jay Z. The public almost immediately went from wildly speculating that Solange attacked Jay for cheating on Beyoncé, to "Aww, look how cute they look! They must have patched things up!" When it comes to handling public scandals via social media, Beyoncé is a regular Olivia Pope.

Lizzie McGuire aka Hilary Duff also looked like she had an amazing marriage with hubby Mike Comrie, but in January the couple announced they'd be separating. Although their current relationship status is unclear, at the time the news came out of left field given the "Chasing the Sun" singer's tendency to post happy shots of her family, both right before and right after word of their possible divorce was released. While the pictures may have cooled down divorce rumors before their official announcement, posting them afterward just put more heat on their situation.

Obviously, celebs can post whatever they want to Twitter and Instagram, but it's just interesting to take a look at the way technology has changed who celebrities handle their personal lives in the public eye, because there seems to be a trend of posting photos that don't reflect the situation at hand.