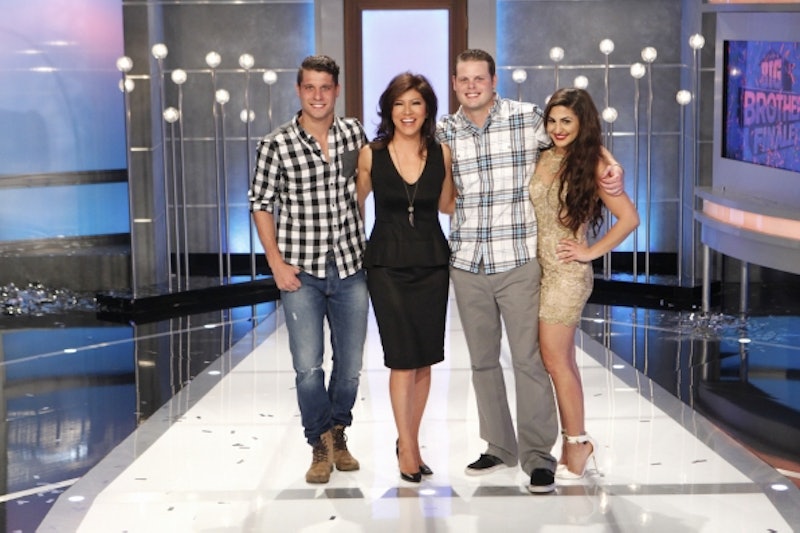 This season of CBS reality series Big Brother might be over, with Derrick winning the grand prize, but that doesn’t mean there isn’t more to talk about. For starters, why did it feel like the show totally failed its female houseguests this season? Joey wanted to start that all-girls alliance and was evicted, Amber turned on Caleb and was evicted, Christine was brutally booed by the audience, and Frankie made horrible rape jokes about Victoria. So what’s up with this Big Brother boys’ club? “There were a lot of big male personalities in the house,” Cody Calafiore — Big Brother's runner up this season — tells me the day after the finale.

“Right from the start, having Devin want to have that all guys’ alliance was a blessing and a curse,” he says. “It kind of set the precedent with a lot of us.” You remember Devin, right? The one who created the half-the-house/ Bomb Squad alliance just moments into the season? At first, it was the six guys, but Devin later — on his own terms — added Christine and Amber into the mix. “I felt like a lot of the girls got nixed early,” Cody continues to say, “And it was kind of unfortunate.”

“The girls were going after each other, they were not working together,” Victoria Rafaeli explains during our interview. “Unfortunately it did not help them. They could have gone far if they worked together,” she says. It kind of seems like this is a united we stand, divided we fall kind of thing. Joey, who was evicted week one after attempting to make an all-girls alliance and exposing the failed alliance to The Bomb Squad, might have been on to something had all the women just kept tight.

But because that was not the case, and because the house did turn into somewhat of a “frat house” — as Big Brother winner, Derrick Levasseur, describes it to me — it caused him to change his appearance to blend in with the boys’ club. Derrick said that he never grew out his beard or wore beanies until he entered the Big Brother house, because he knew that’s what he needed to do to fit into the guys' alliance. Seriously, Derrick's game play went down to wearing a beanie — a beanie — to get himself further in the game. At this point, if you had any question in your mind if this guy did or didn't deserve to win, I think the beanie has spoken.

So did the women in the house ever stand a chance? From the comments of the final three, it seems like they didn't — even Derrick, one of the best players in Big Brother history, couldn't reverse the fate of the women in the house once that all-male dynamic was established by Devin, Caleb, Frankie, and Zach early on in the game. Even CBS got in on the sexism at times throughout the season, using out of context footage of the women sunbathing while the men were strategizing and talking game, as if the women were only in the house to get their tan on. Seems we'll have to cross our fingers for a female-friendly Big Brother 17. Perhaps Joey could come back and make the all-girls alliance happen?