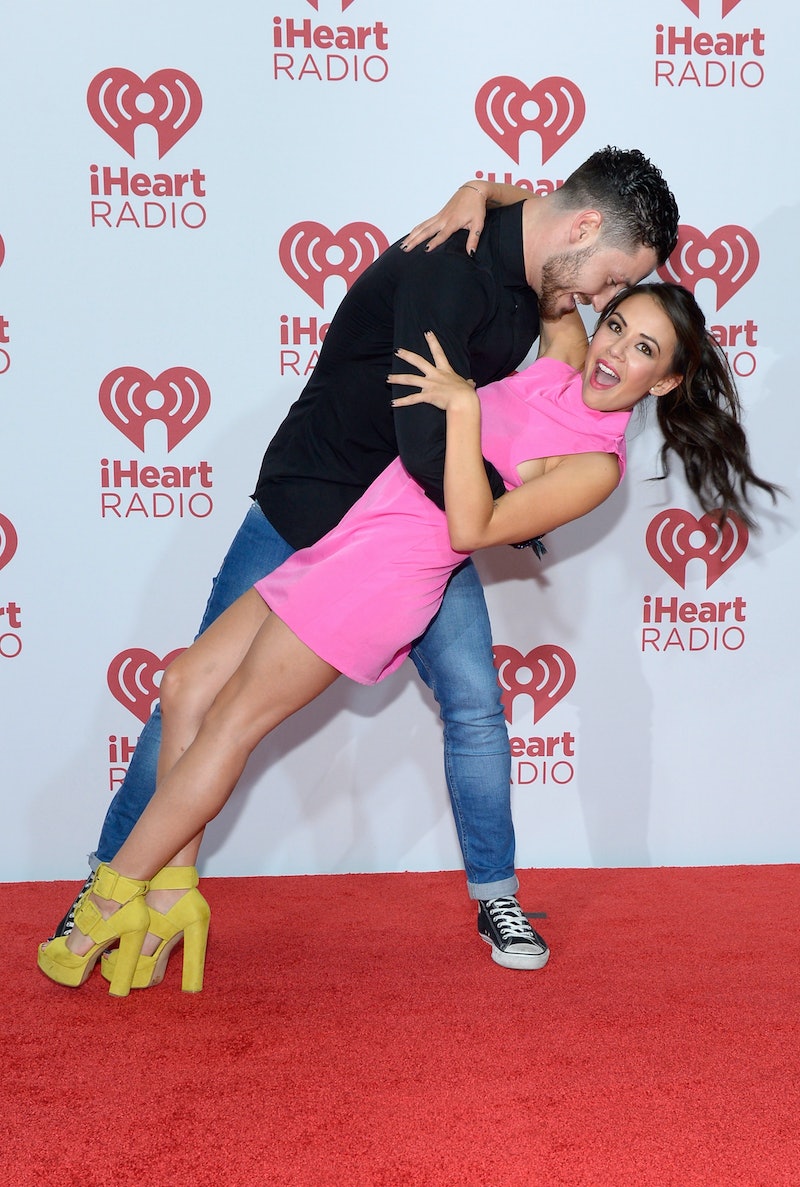 Are we looking at the mirror ball's future winning team? I mean, it's definitely possible, considering DWTS partners Janel Parrish & Val Chmerkovskiy are doing everything to emulate Maksyl's winning season. Janelskiy (yes, that's what they call themselves) are so good at faking their romance that we might actually start believing that they're in love one day, even though Janel Parrish has a boyfriend. But, in the interest of comparing them to DWTS sweethearts Meryl Davis and Maksim Chmerkovskiy — because I can't help but compare Val to his brother — we obviously have to assign Janelskiy a Disney couple for the remainder of their season. So, while Maksyl embodied the classic Disney couple Belle and The Beast Janel and Val are a less traditional pairing: Megara and Hercules from Disney's Hercules.

I know. Now that I've put it out there, you can't help but notice it. But at least now you can finally forget about Janel & Val playing bride and groom during last week's performance. In all seriousness, however, there are plenty of signs that Meg and Herc are the official Disney counterparts to Janel and Val. And here is the evidence:

Exhibit A: Meg & Janel Both Played With Villains

Meg made her deal with Hades and played double-agent for awhile, just like Janel's Pretty Little Liars character Mona played for the "A" team until her death in the Season 5 midseason finale.

They both eventually chose to use their powers for good, but they still both started on the wrong side of the Good vs. Evil fight.

Why do we love Herc so much? Because he's a little doofy and by "a little" I actually mean "a lot." This also applies to Val, whether he's braiding girls' hair or catching marshmallows in his mouth like this:

Herc and Meg totally would play this game at home, right?

Exhibit C: These Ladies Are Doing Crazy Things For Love

Meg sacrificed herself to save Hercules because, love. Well, Janel's got a boyfriend and she appears to be falling for Val because when love calls, you answer.

Whether you've got a supportive boyfriend or not.

The answer should be you, Val. Don't be shy!

Exhibit E: They Have A Muse

Hercules and Meg had the muses, "goddess of the arts and proclaimers of heroes." That sounds a lot like Erin Andrews in the ballroom, right?

And, Erin's totally not opposed to calling out potential lovebirds on live TV — which the muses would totally approve of.