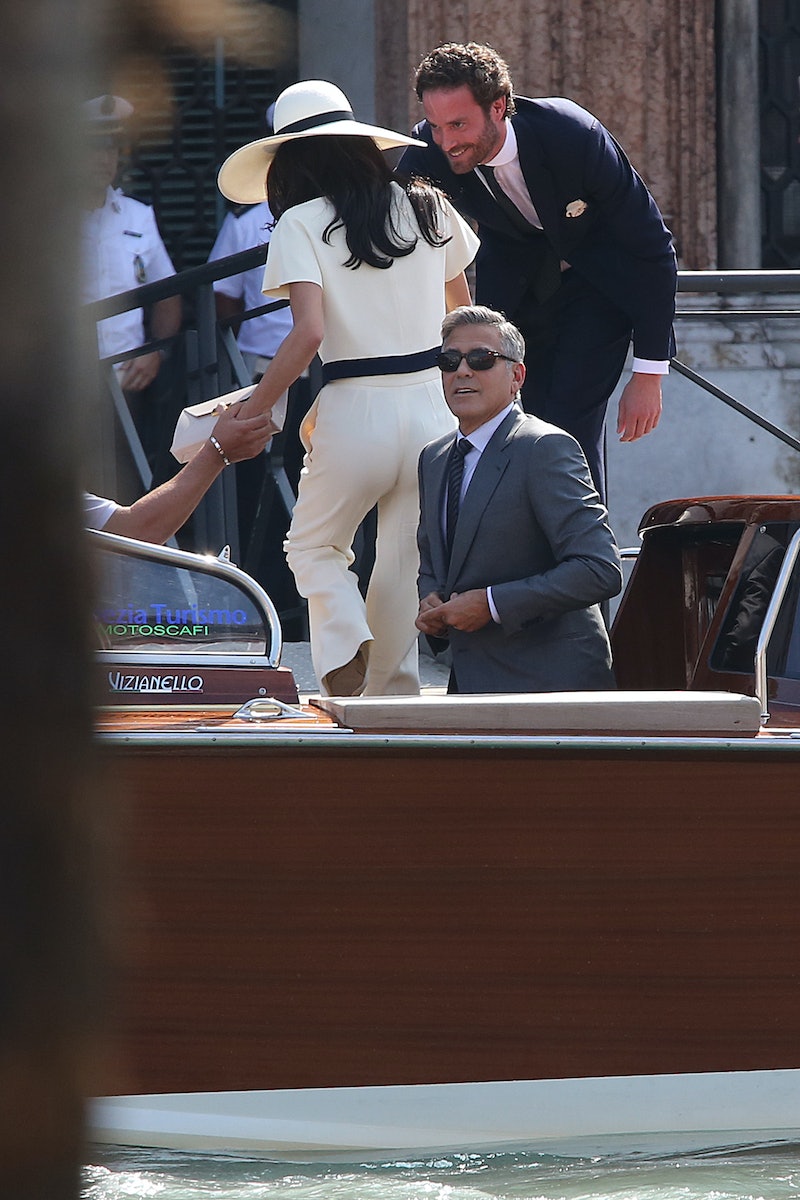 Update: People and Hello! magazines have secured the rights to George Clooney & Amal Alamuddin's wedding photos. Reportedly, U.S. Vogue may still get some shots of the wedding as well.

George Clooney and Amal Alamuddin got married over the weekend in a rather spectacular affair, and I’m not just talking about Alamuddin’s outfits or the star-studded guest list, though those were pretty big factors into the wedding's glamour. If you needed more convincing that Clooney was prepared to commit to being a lawfully wedded husband, you really didn't need to look further than the boat-filled canals of Venice, where he and his fiancée, quite a few of their closest friends, and possibly even more paparazzi descended on the city to catch a glimpse of the "internationally acclaimed barrister" and the Hollywood actor unite in matrimony. Yet, while we may have several snaps of a smiley Clooney on a boat headed to the ceremony, we have no photos of the ceremony itself. So when will we finally get to see official photos of George Clooney and Amal Alamuddin’s wedding? It looks like we won't have to wait long, thanks to Vogue.

According to Australian Vogue, People magazine and U.S. Vogue secured rights and exclusive images to Clooney's Venetian wedding and all proceeds will go to charity in the couple's name. It's the same sort of deal that Clooney's friends Brad Pitt and Angelina Jolie pulled with their baby photos and their recent secret wedding.

What's more, Vogue editor-in-chief Anna Wintour was in attendance at the ceremony, and then there was a subsequent reel of photos of Clooney and Alamuddin's wedding weekend on the Australian Vogue website. These 23 pics covering everything from Alamuddin hat shopping, Clooney having dinner the night before, and the guests from Bill Murray to Matt Damon arriving on their own boats, are just a taste of what's to come for the printed publications. The whole thing is gorgeous without any Instagram filters.

It makes sense for Clooney and Alamuddin to combine his star power with their humanitarian efforts. The much anticipated wedding is a great way to raise funds for charities considering all of the attention it's getting from the media. Not to mention, it also promotes tourism in Venice. Those pics make me want to visit stat.

Besides, Wintour herself understands star power for sales. After all, she gave Kim Kardashian her much coveted Vogue cover. Maybe Clooney and Alamuddin will grace the fashion tome in the upcoming months too. They already look photo-ready without posing.

I can also see the magazine spreads also acting as an outlet for Clooney wanting to spread the love. It could be his version of Tom Cruise jumping on the couch because He. Loves. This. Woman.

Clooney's been very open about this whole affair, come to think of it. In the same way that he's been open about not wanting marriage, Clooney's wanted us to know that he's pro-marriage now. He pretty much invited everyone to witness the occasion when he spilled wedding details during a speech at a charity event in Florence. Unable to contain his emotions for Alamuddin, he mentioned the where and when of his upcoming wedding to the crowd. He was practically asking us to come celebrate. People reported it the next day and thus the wedding watch began. I'd say that Clooney's excited to share his and Alamuddin's special day with the rest of us who couldn't be there.

Besides, all of Alamuddin's gorgeous wedding outfits belong beautiful in a Vogue photo spread. Don't you think?